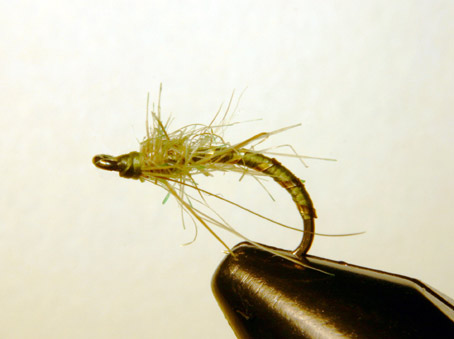 Originally developed for fishing Coniston Hall (see review here) . During much of the season olive flies can do well at Coniston Hall, both buzzer and olive upwing type patterns. I have also had a couple of storming sessions there with sedge pupae representations on curved hooks so I just decided the throw the whole lot into one pattern.

This fly doesn’t really know what it is but it catches. The thorax is a dirty great mess of coarse seal’s fur which flies in the face of the current trend for Kate Moss inspired skinny buzzers lathered in epoxy resin. Fish it on either floater or intermediate, probably best on the dropper with a slightly heavier pattern on the point. Because of that shaggy thorax you can also Gink it up and fish it in the surface film as an emerging….thing.

Please note, the material list above is just a guideline

1. Catch on your thread just before the eye and put in a few turns to lock it down. 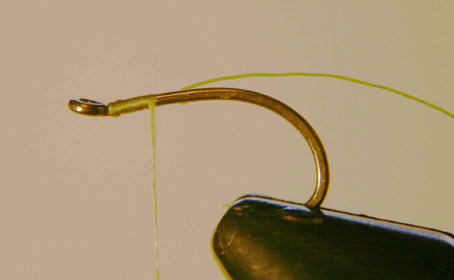 2.Catch in a length of flat gold tinsel, enough to give you 5 or 6 turns of rib plus plenty to hold onto whilst ribbing. 4 inches should do you and you may need to stretch it a little to get the right thickness…..fat ribs don’t look right on this fly. 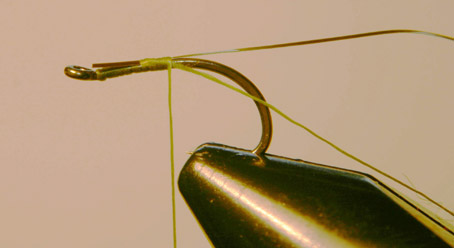 3.Trim the excess thread from where you tied it in. Lash the gold tinsel down with close touching turns down to a point round the bend, as per pic below. As you can probably see in the picture the turns of thread can get quite tricky towards the end.

4. Using close touching turns again, wind your way back up to roughly where the thorax will begin. Follow with 5 or 6 evenly spaced open turns to the same point with the tinsel and lock it down with a few locking turns. 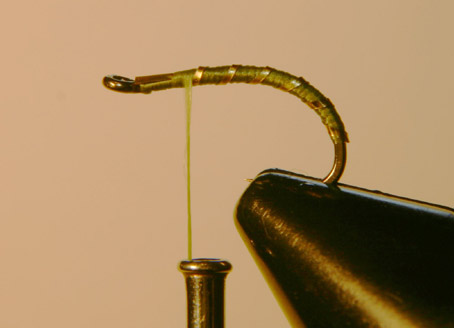 5. Pre wax a couple of inches of your thread then pinch and roll a decent amount of coarse pale olive seal’s fur on. Don’t be shy with the stuff but don’t go crazy, the goal is to achieve a straggly, leggy look. 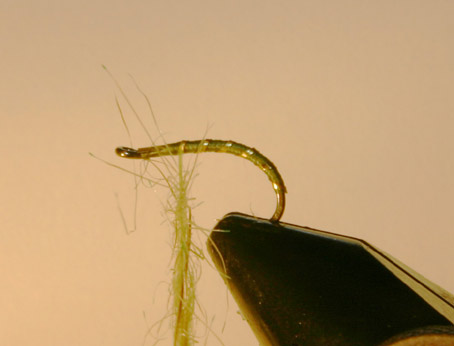 6. Put on about 3 or 4 turns of the dubbing to form a nice spiky thorax…you may need to add or remove some of the seal’s fur depending on how it’s looking. Sweep the longer fibres backwards and put in a couple of turns of thread to hold them like this. 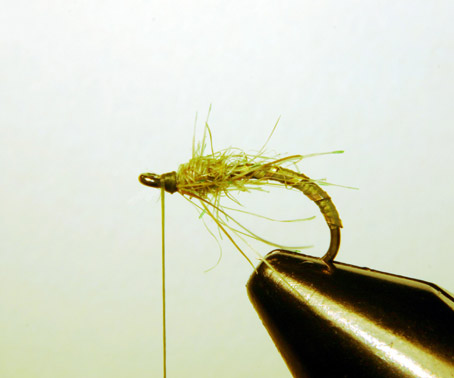 7. Form a small neat head then whip-finish. Job done. If you’ve got nothing better to do, tie another one, this time on a size 12.