16th April was scheduled to be the 1st official outing of 2010 for the band of misfits, sexual deviants and criminals that maketh the Roundhay Fly Fishers. We were all set for a return visit to Kiplin Hall when startling news arrived from one of our forward elements that Kiplin Hall is no longer a fly fishing venue, it’s now leased by a coarse fishing syndicate. Fortunately, a club meeting was scheduled for the evening of the 15th. Ideas were run up the flagpole and the decision was made to carry on with our day out , simply changing the venue to West Tanfield.

Yours truly awoke early on D-Day, earlier than a normal work day, and yet by the time I’d had breakfast, packed bag, made flask, bought provisions (including a foot long spicy Italian sub..mmm) and driven up the A1 it was pushing 11am when I hit Tanfield Lodge. The weather was surprisingly pleasant for an RFF outing, with spring sunshine and blue skies for most of the day although the wind was still cold when it picked up.  As always, my tardiness meant all the best spots were taken but I managed to squeeze into a space on the ‘wooded’ side where several other members had plotted up.

I was fishing next to Andy who had clearly picked the right place and was using the right fly, a black goldhead buzzer fished on a floating line with fairly long leader. I had no goldhead buzzers. I tried every other goldhead creation in my fly-box but couldn’t get a sniff. I think it was when Andy cheerfully announced he’d just struck into fish number 6 that I in turn cheerfully called him a fish-catching-bastard.  I do tend to struggle when no fish are showing. Fishing sub-surface means you’ve no indication you’re doing it right unless you feel a tug on the line whereas fishing on top you can see any activity in the vicinity of your flies. Looking at the pictures now, I’m wondering if I was actually casting too far because the action was probably concentrated fairly close in on the shelf (just visible as in picture below)

Naturally, when the fish started showing I found renewed enthusiasm and this seemed to be well placed when, after tying on a sugar-cube shipmans, I hooked and landed a feisty rainbow of about 1lb 1/4. More swirls followed but no further contact was made so I changed to a size 14 parachute Adams – a fly that often works really well for me during buzzer hatches. My second cast with it was a real pearler, 25 yards, straight as an arrow with perfect turnover. The fly kissed the water, tension built, I knew it was coming …. a dark shape moved and a swirl enveloped my offering. I struck fast and hard, the rod tip dipped then sprang back. B*ll*cks, that fish felt goooood. My fly was snapped clean off along with a few inches of tippet so I must’ve had a wind knot. Luckily, I had another parachute Adams in my fly box. Unluckily, it brought no more offers, isn’t that just typical?

Post Subway, I headed back down to the lake and cheekily pushed in next to Kevin, one of RFFs most prolific fish-catchers who had been caning them out true-to-form. Sport had dropped off a bit around the lake, but Kevin was still catching the odd fish on small nymphs and buzzers, including one that I’m assuming was the biggest fish of the day at over 4lbs. I couldn’t replicate his success so in desperation put out a damsel fritz on an intermediate but even this failed me! Gaagh!

A few yards down from Kev was another success story as John struck into his umpteenth fish of the day, the pair of them were mopping up! To add to my frustration, on the other bank another John was playing a fish! 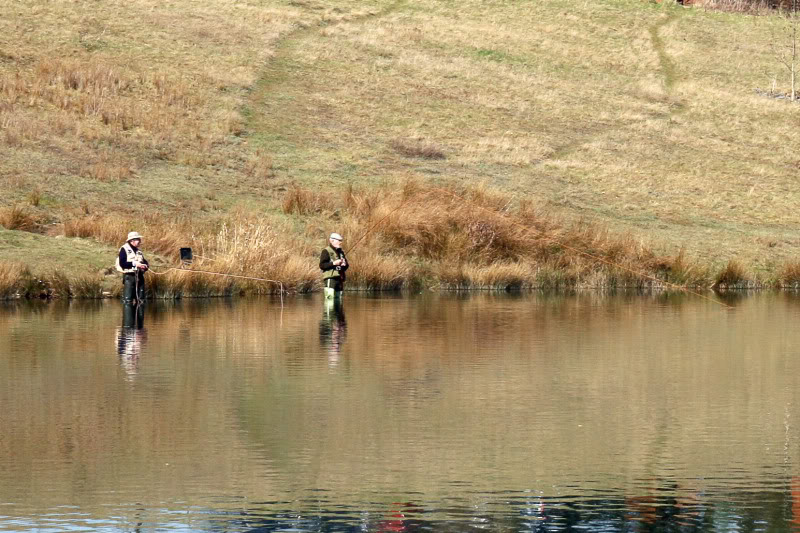 I packed up in disgust and moved down to where I’d fished earlier in the morning. Now I’ve stopped smoking I don’t even have the blessed relief of firing up a roll-up so morale was low in the Bob camp. By now, there wasn’t a ripple to be seen on the water and no-one down this end of the lake was having much luck. I was tired, my casting had gone to sh*t as it always does when fatigue sets in and the 5lb Drennan mono tippett attached to my size 14 flatback CDC buzzer was floating on the surface no matter what I tried. It looked ridiculous in the flat calm but wait…what’s that…a fish swirled just next to the buzzer! 10 seconds later a text-book head and tail rise right on the nose! A momentary spurt of adrenaline was accompanied by blessed relief. Played, netted, released…that fish saved my sanity. Time to go home.