Haven’t been up to Beaverdyke for a few weeks, the p*ss poor weather has been putting me off. Finally managed to get up for an afternoon/evening session in some pleasant conditions and it’s good to see things as they should be! This is the view I was greeted with as I headed down to the reservoir… 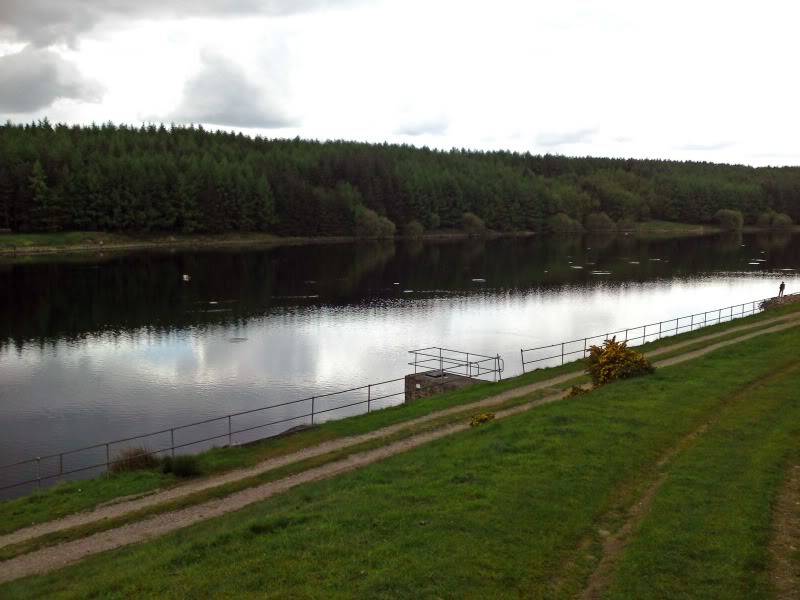 Not the best quality, phone cameras aren’t quite there yet are they? But you get the idea. So, (despite my galloping over-pronation) I skipped excitedly down to the waters edge and put up a rod with 13ft leader, tapered down to 5ft tippet and a size 14 scruffy black shipmans buzzer as payload. Can’t fail when fish are taking buzzers just in the surface. ‘Meh’ said the fish “we don’t want your stinking shipman”. On went the next fly, a lightly dressed buzzer which fishes just under the surface. Nope. Next choice, a tiny black hopper. The fish responded with ridicule now, on several occasions 4 fish at a time would simultaneously rise around the hopper which became the middle pip on a die’s five side. It wasn’t just me though, other anglers were hitting the same frustration – these fish were pre-occupied.  I finally managed to tempt a solitary little rainbow with an olive buzzer, but it was clear I’d not matched the hatch and this fish was a fluke.

Plan B. I headed up to John O’Gaunts and fished there for a while even though only a handful of fish were moving. It’s very rare to get a full-frontal rise of justice on this reservoir, it’s stocked only with browns which are, as we know,  cantankerous little b*stards.  I got 2 violent tugs at my buzzer, and one head and tail rise on top if it for good measure but nowt else so I returned to Beaverdyke for another crack at the crazy rainbows.

After failing to crack the code with a further 2 flies (parachute adams and a size 16 brown buzzer) I finally got in the groove with a size 20 CDC shuttlecock buzzer! I proceeded to get interest practically every cast and succeeded in landing 3 fish on it before the inevitable disintergration happened. This was, as I’m sure you can guess, my only size 20 CDC shuttlecock buzzer. Light was fading, but I wanted one more fish so I went for shock and awe. Out went my patented Mantog’s Mayfly, a BIG old dun with lashings of deer hair and a juicy detached body. My plan worked, a trout mopping up tiny little chironomids looked up to see a meal of epic proportions and lazily rolled it down.

I’ve tied more size 20 CDC shuttlecock buzzers tonight. No doubt the trout will be shovelling down water-boatmen, or mice or something on my next visit.