I do occasionally drag myself up and down hills without the prospect of any fishing. I guess that makes me a part time rambler. Or is it fell walker. Or just walker. Or a hiker? Or a rambling hiking fell walker? Whatever. I’ve just had a top weekend up in the Lake district which ticked most of life’s important boxes – real ale, single malt, awesome scenery, Tunnock’s bars, and vigorous exercise

Base camp for the weekend was the ever reliable Greenhowe caravan site in Langdale. Big comfy static caravans, complete with showers and separate bedrooms. Bang on! Here’s a linky  http://www.greenhowe.com/ . Phil, Tom and Smithers had gone up Friday morning to bag a mountain, whereas myself and Stu didn’t arrive until 9:30 in the evening, partially down to wandering around Booths in Ilkley like a pair of women doing the weekly shop. Unsurprisingly we met them in the nearest pub, the legendary Stickle Barn which is a proper walkers’ bar, and free house. A few pints of Tag Lag were sunk then we retired to the sharabang to break open some 15 year old Glenfiddich.

Saturday morning brought with it thick heads and bright sunshine. Whilst tucking into Phil’s precious organic Weetabix I gazed out on the sun dappled oak trees, enjoying their last few days of verdant splendour set against a cobalt blue sky.  A cloth-tearing fart from one of my fellow  caravaners shattered the peace and quiet, and I grimly finished eating my contraband before packing my bag for the day ahead.

We set off walking sometime before midday, quite an achievement for us, and the weather was better than anything we could possibly hoped for.

The walk starts at Dungeon Gill Hotel and climbs up alongside Mill Gill at a steady pull. It took roughly 30 minutes before we got that ‘been in the hills without a woman for a long time’ feeling, and female ramblers skirted round us with nervous glances. It’s a popular route up to the tarn and we had to cross over the stream to take the less defined path in order to avoid getting caught in a log-jam of rambling hikers. 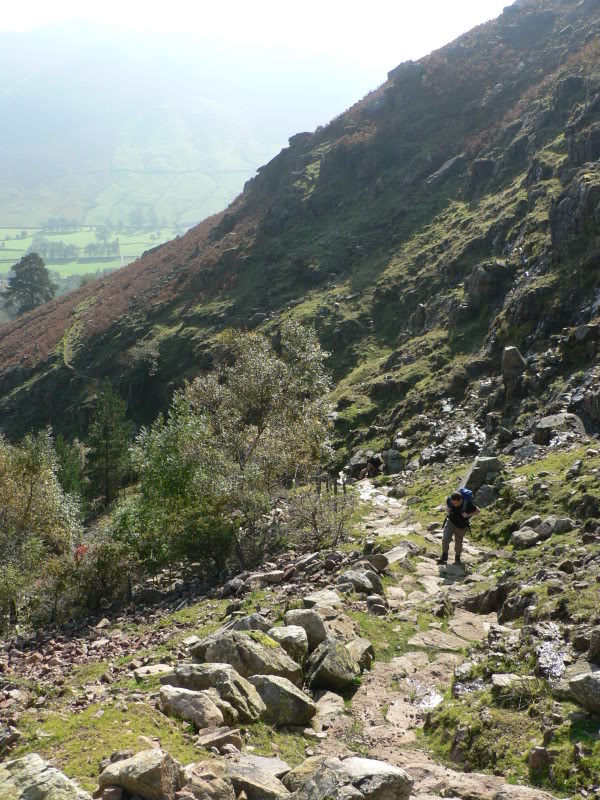 We eventually arrived at the tarn to join the dozens of other people sat around stuffing their faces whilst admiring the view. Kids and dogs splashing around in the water didn’t seem to deter several trout from rising to something or other (probably breadcrusts!) 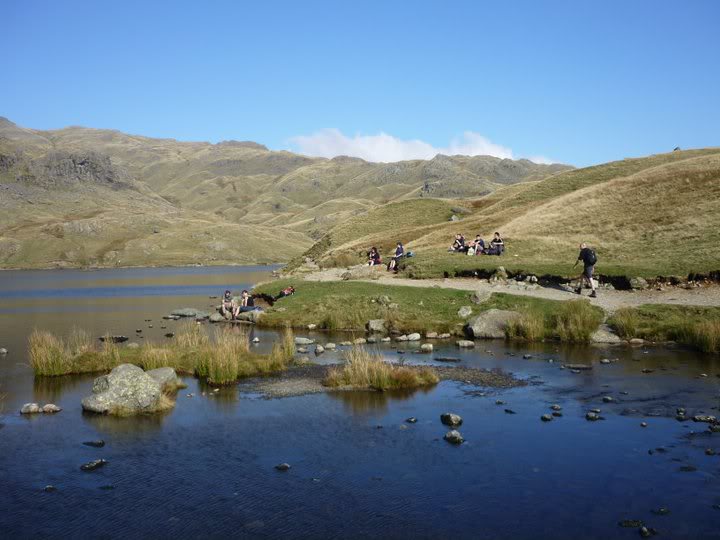 Our attention was primarily drawn to the cliff behind the tarn though, 400 foot of unforgiving rock with a thin, sketchy path cutting diagonally across it’s brutal face. This route is known as Jack’s Rake and is famous amongst proper fell-walking types. It’s actually a Grade 1 scramble, a sort of climb that doesn’t need ropes (not on dry days anyway).  It looked daunting to say the least but this was our target for the day.

A steady path around the tarn takes you to the foot of the cliff, then it’s up a short scree slope onto the route, which is more of a gully then anything else. 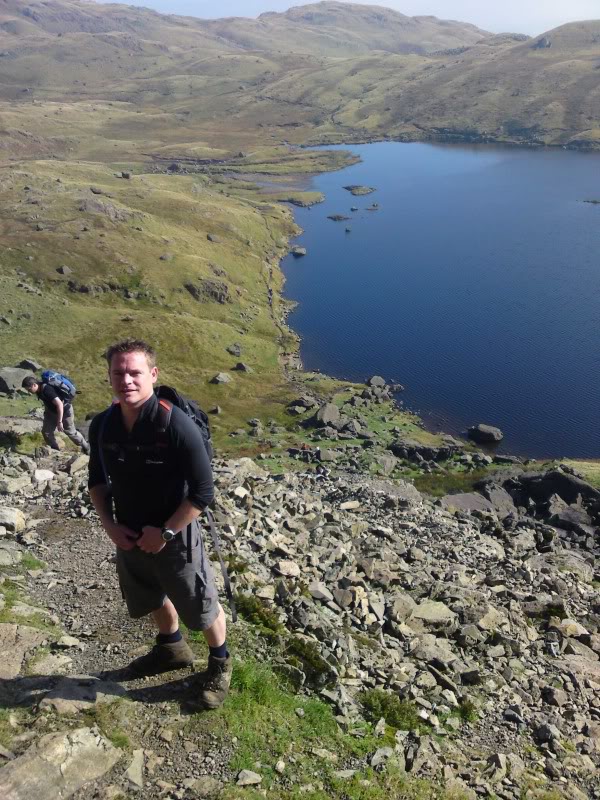 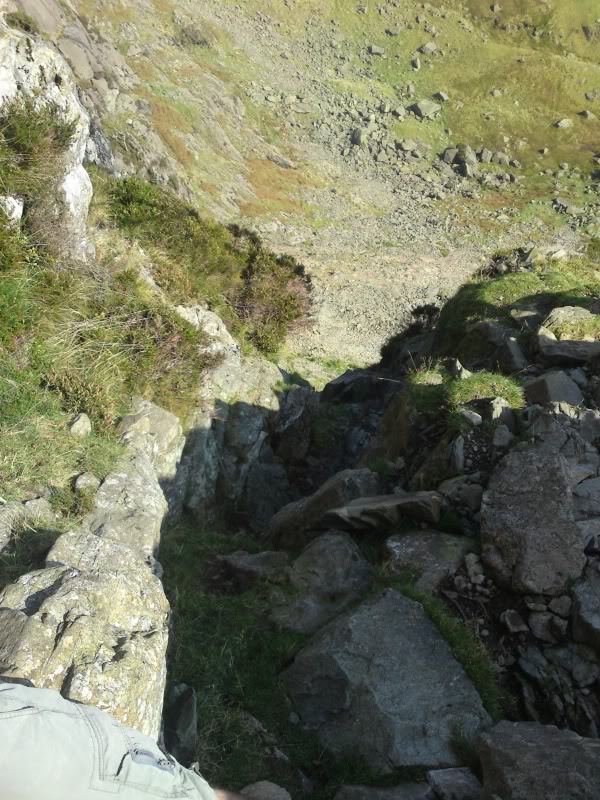 There’s a couple of tricky bits that require careful placement of hands and feet, one being a tight chimney (snigger) that a Geordie guy in front of us thoughtfully struck a pose on to show the level of agility required to climb it. 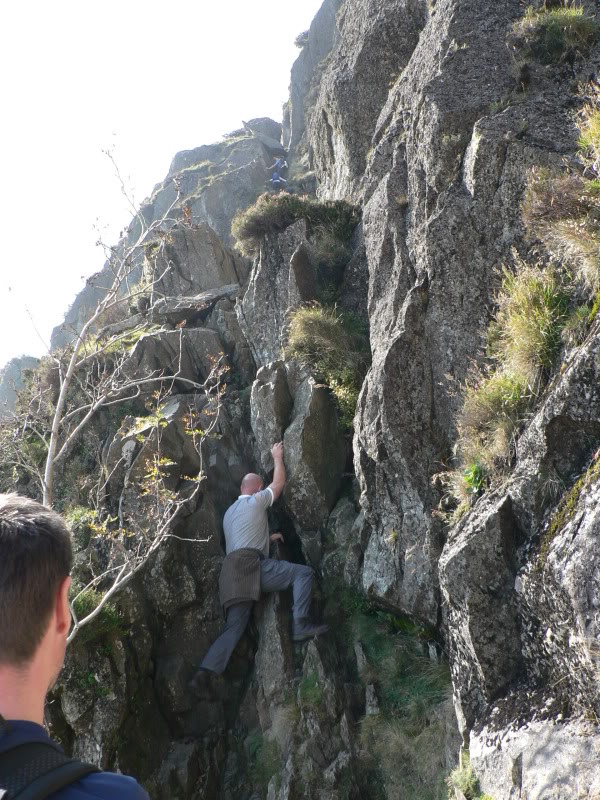 More shots below of the climb up 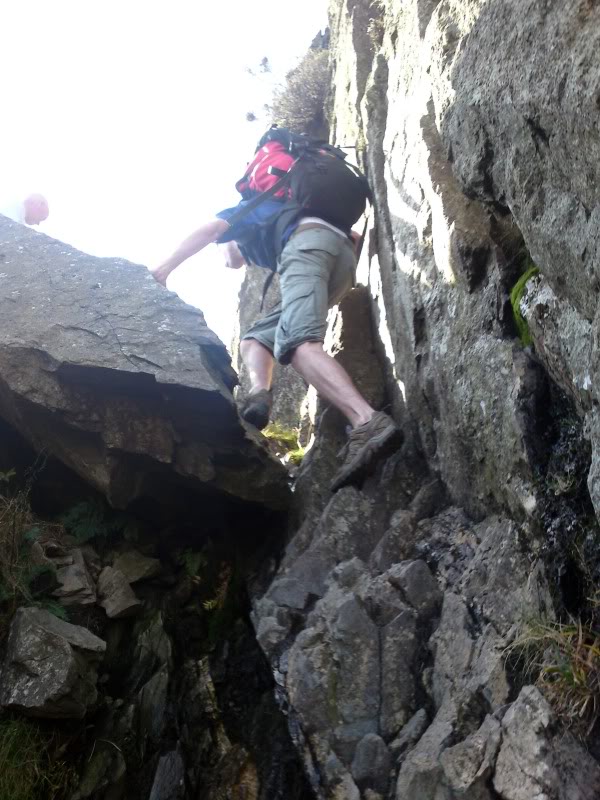 The summit provides an excellent view, although yours truly is in the way here 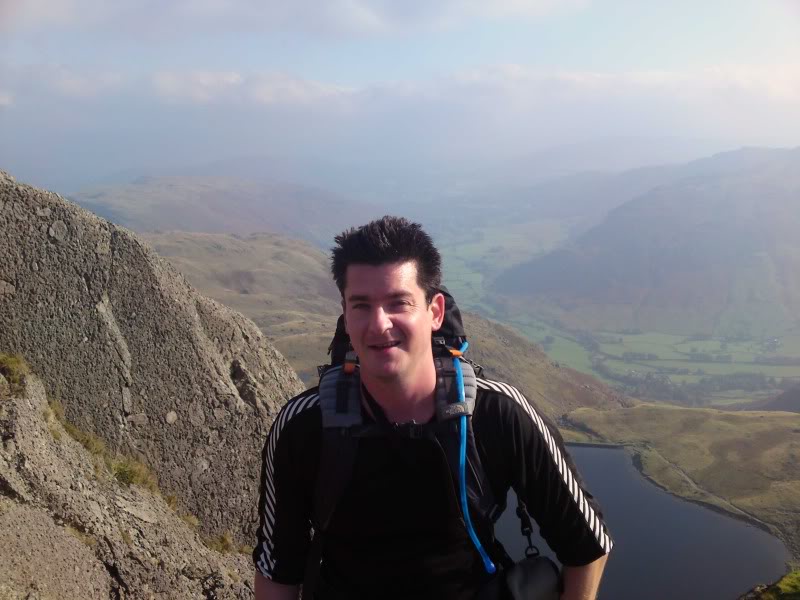 After lunching just behind the top of Pavey Ark we walked over the next peak (can’t remember its name) and, whilst staring over at the cliff we’d just ‘bagged’, congratulated ourselves on our remarkable climbing skills. 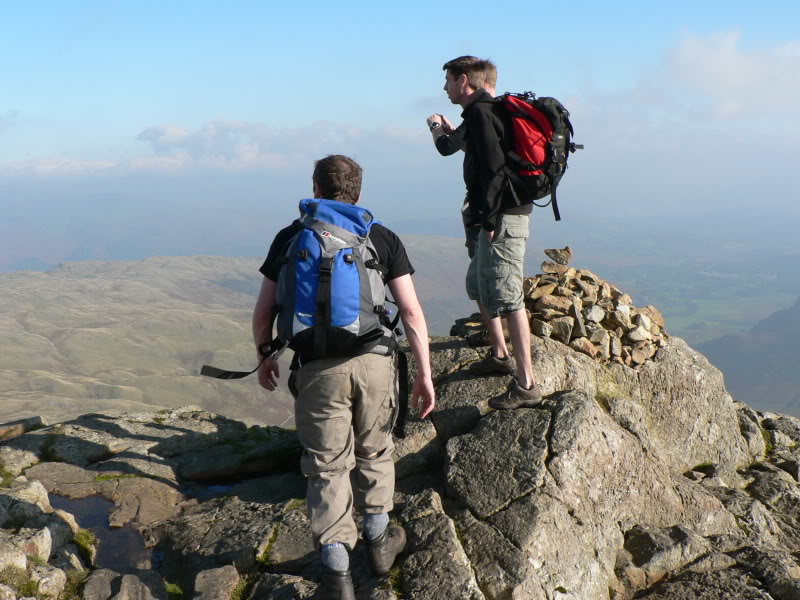 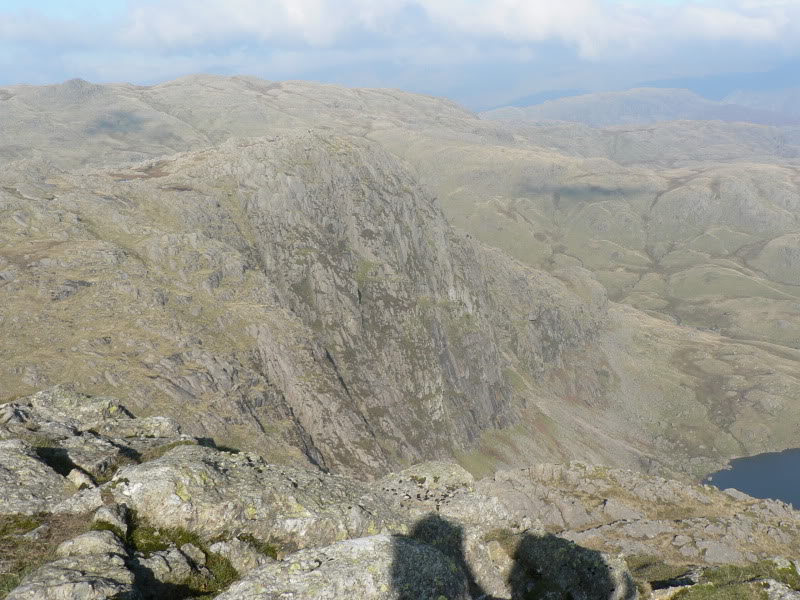 The fact that a grade 1 scramble is the easiest level was probably lost on us. All we knew was that we’d damned well earned a pint or two in the Stickle Barn. It’s an easy walk back down to the pub and we called in with a view to having 2 or 3 pints then walking back to the caravan to get showered and changed before embarking on the rest of the night.  7 or 8 pints later we staggered back, necks craned skywards to take in the magnificent view of the Milky Way. No sign of Uranus, sadly.