Tying this fly is very much like making love to a beautiful woman. First, make sure you’ve got a tight grip on your shank. Then, make sure your cock is firm but not too stiff. Finally, don’t leave a huge blob of varnish on the head. 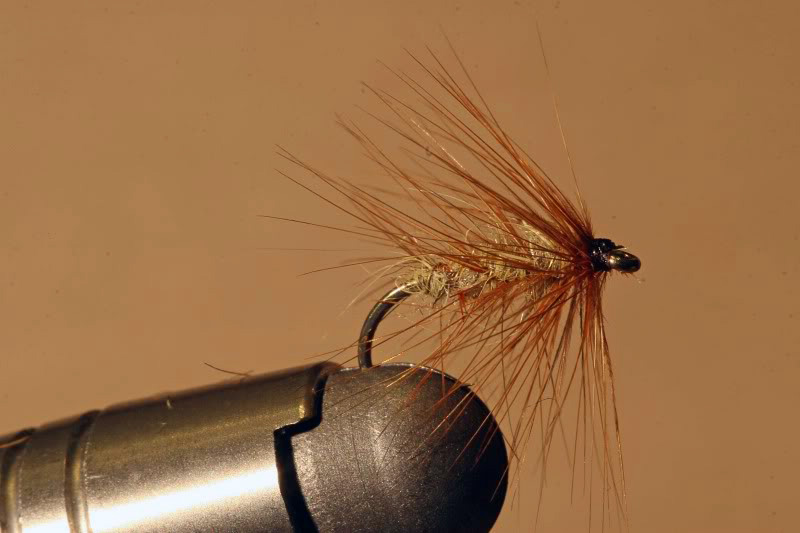 Whenever I go fishing for wild browns, this fly will always be on my cast, it’s as simple as that. If I turned up to fish a Scottish loch and discovered I had no examples of this fly I’d halve my chances of catching.

I must give credit to Trout Fisherman magazine, and in turn whoever designed a fly that appeared in it many years ago. I can’t remember what it was called but it was labelled as an excellent pattern for wild browns so I tied one and caught a wild brownie on it! However, I lost the fly, the magazine and my memory of the exact pattern! But I vaguely recalled certain aspects of it, and created my own variant which I subsequently named Bob’s Bob Fly! Once again, let me be clear – I’m fully aware that this fly is ‘inspired’ by one invented by someone else so I can’t take all the credit for it 😉

In my humble opinion the addition of SLF is important because it adds a delicate ‘shimmer’.

Genetic cock hackles designed for smaller dry flies are too short and stiff for this pattern. Dig out your cheap Chinese cape for this bad boy!

Best tied whilst wearing a kilt and knee socks riddled with bits of dried heather. 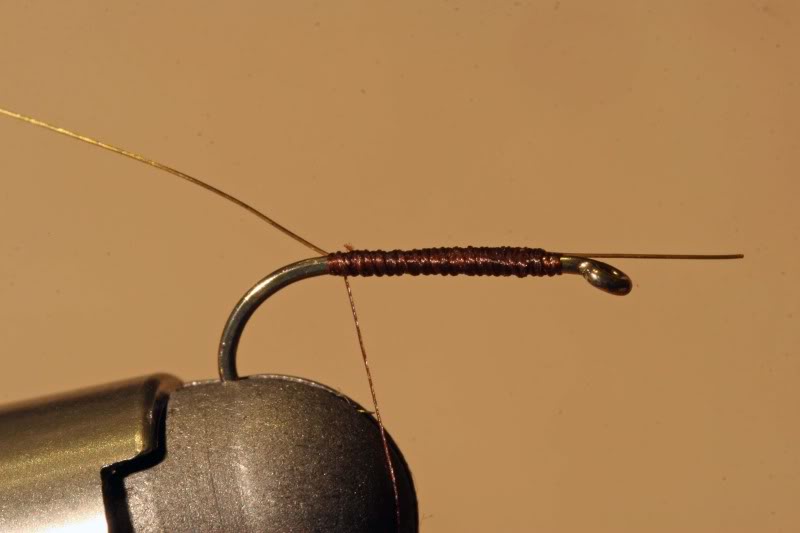 2. Take a good pinch of your yellow SLF, then add a small amount of natural hare’s ear and mix it up together. Ratio of 1 part hare’s ear to 3 parts SLF. Dub a slightly tapered body up to a point just before the eye – you need to leave a bit of space for the hackles. 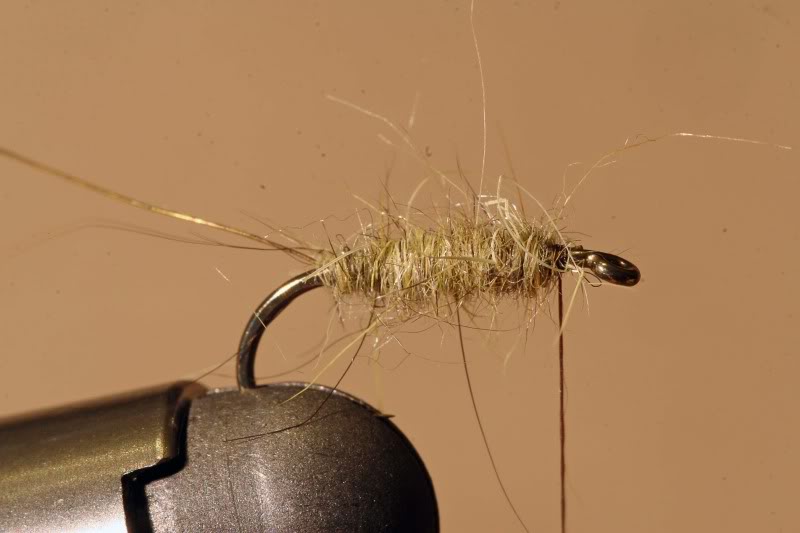 3. Catch in a red game cock hackle where the body ends then wind down to the tail end. Leave your hackles pliers attached and dangling! 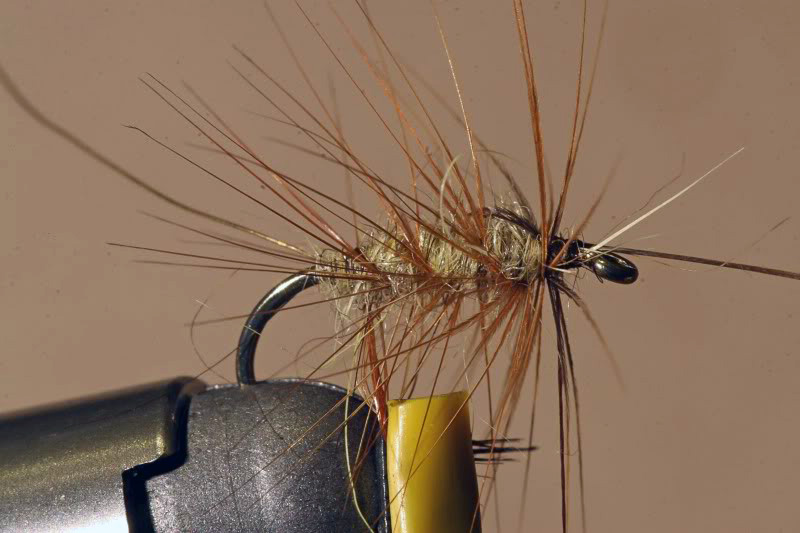 4. Now wind the rib back up, working it through the hackle fibres taking care not to trap any.  A wiggling technique helps! Tie off directly in front of hackle then snip off the hackle tip at rear. 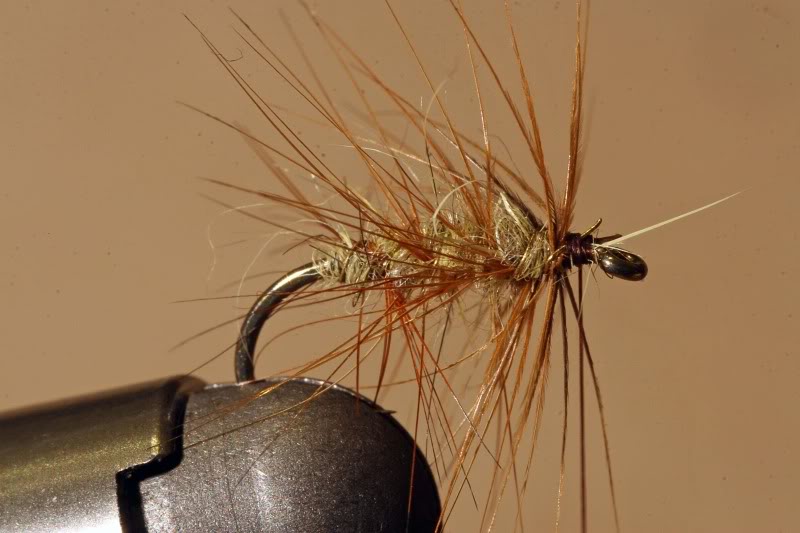 5. Catch in your second hackle. The fibres should be slightly longer than those at the shoulder. 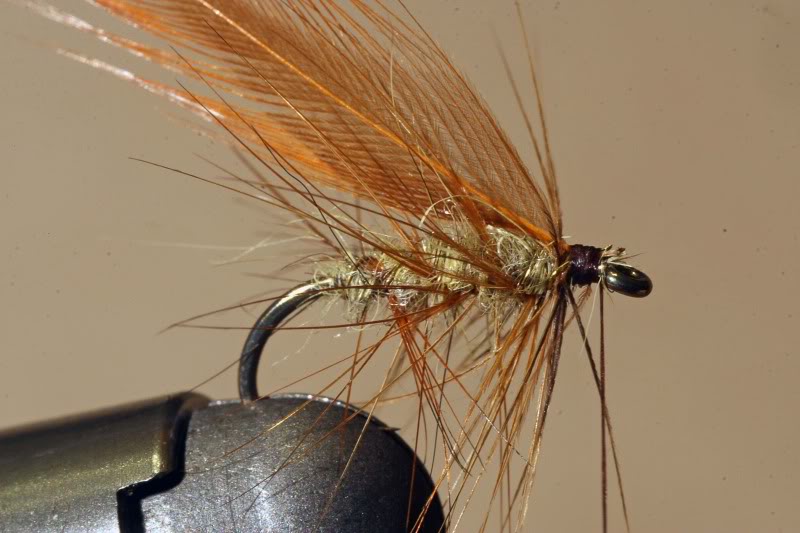 6. Put in about 3 turns, lash down and snip off excess stalk. Tease all the hackle fibres back so they ‘flow’ backwards.  Form a small head then whip finish and add a touch of clear varnish. Stand back, light your sporran and admire your handiwork.

How to fish
Stick it on your dropper as the bob fly, the disturbance it creates in the surface is subtle but effective. You can make it more disruptive if you desire by using a bigger, stiffer cock hackle.

One thought on “Bob’s Bob Fly – an essential loch pattern”