This weekend I had planned to go down to Cambridgeshire to visit friends and then go onto Brize Norton on the Sunday for an RAF photocall. I decided to go down early on the Saturday and get in a few hours at Grafham, my old nemesis. I went 3 or 4 times back in the early noughties and only caught one fish for countless hours spent bobbing around in a boat or fishing from the bank.  I did some prep by posting on the http://www.flyfishing.co.uk/news/index.php forum and got given some advice on where to fish and what flies to use so when I hit the angling lodge around 11 and got a bank fishing permit (1 fish then C&R) I also got 2 red holo crunchers. This, I was told, is the fly du jour as the fish are just switching onto shrimp. 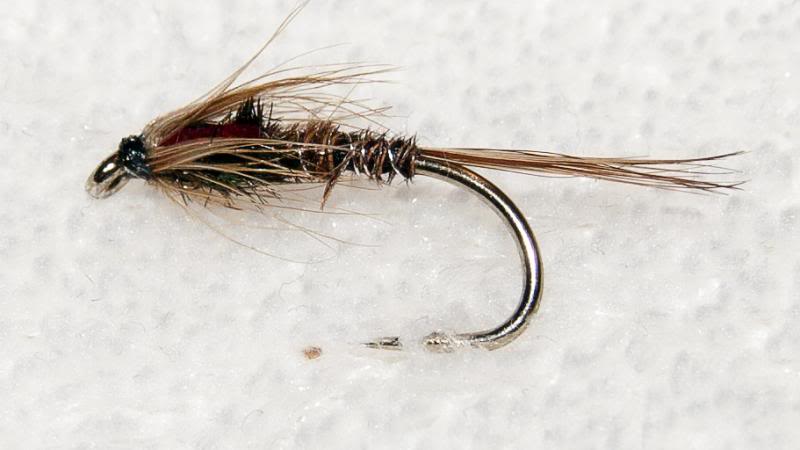 Ticket in hand, and surprisingly excited for a day’s rainbow fishing (you may recall I’ve been getting right snobby of late about my wild brownie fishing) I parked in Plummer car park and walked onto the dam. The fine weather I was expecting hadn’t materialized but I wasn’t too fussed, I was tooled up with chesties and wading jacket. Actually, it looks a lot nicer in this pic than it was. 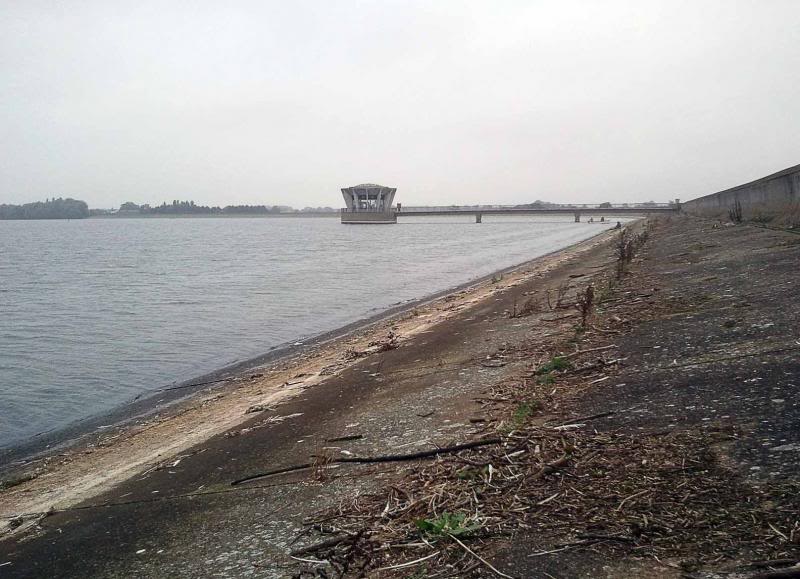 I put up my more powerful rod, the Daiwa Lochmor Z 10ft 7 weight, with one of the crunchers on point and a diawl bach on a dropper. I spoke to a couple of other anglers as I walked along the dam and it sounded as if what fish were being caught were close in.  Christ, they weren’t kidding – my second cast got a pull about 2 foot out! A flash of silver and it was gone before I had chance to lift into it. My spirits rose them sank as I realised that such early luck is usually a prelude to a blank! There did indeed follow a period of prolonged nothingness and the familiar feelings of self doubt and questioning around what I was actually doing fishing for rainbows returned.

An hour later I was in, it felt good, then it came off, which was not so good. An hour after that  I got a tap and I was in. Bang bang bang bang bang, you know the fish is gonna come off when it’s doing that head shake. Then the frantic head shaking stopped and the fish torpedoed away from me on a powerful run. “Yes , yes, yes he’s put me on the reel!” went through my mind as yards and yards of slack were picked up like an anchor chain hitting the briny depths followed by the sound of my drag kicking in whilst more line got stripped off the spool. The run stopped, I worked him back to shore, then he ran out again. This went on for 10 – 15 minutes. Might not sound like a lot but actually, 15 whole minutes playing a fish? If I saw someone playing a rainbow for much more than 5 minutes I’d think they were some sort of showboating prick but here I was incapable of taming this thing. I’m 6’5″, I weigh nearly 15 stone, I’m wielding a powerful 10 foot rod and yet this rainbow trout is handing me my ass on a plate! I even tried prolonged side-strain but it took a full 15 minutes to get him head up and ready for the net. Now what? I have a short handled net but I can’t get near the waterline because it’s stupidly slippy on this dam. I eventually slide down on my ass and net him in, only I don’t because my net won’t open as the netting has all bunched up and jammed the frame like a fat woman caught with her dress round her ankles. People are staring now. I’d be staring. What is that idiot doing, he must be a total amateur. Finally I got the fish half in my net and delivered the coup de grace as quickly as I could. Even my priest seemed inadequate! 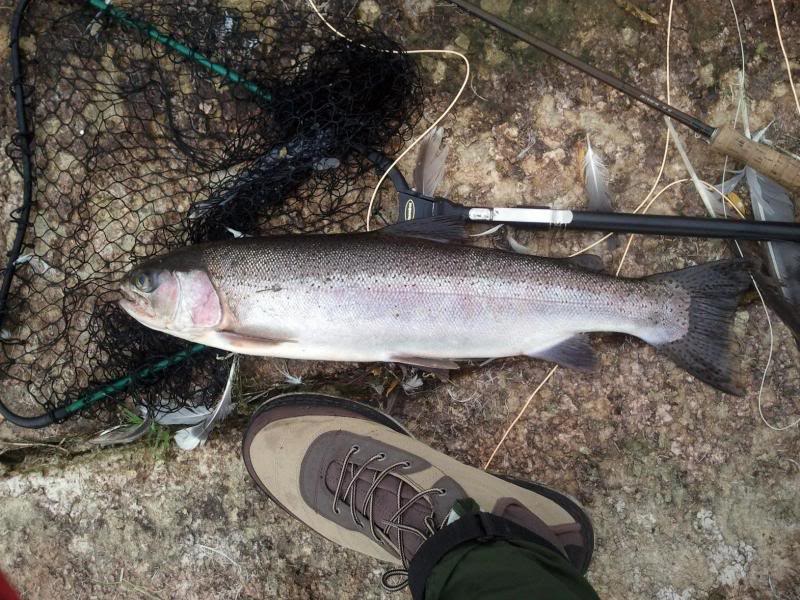 Not the biggest rainbow I’ve ever caught –  bearing in mind they’re size 12 boots I’m guessing it’s about 4 and a half pound? But by God I’ve never experienced a fight like that before! Immense fun! It didn’t go to waste, the people I stayed with now have a lovely big slab of fish in their freezer.

It was the cruncher that did it guvernor. I kept the same team, cruncher and diawl bach and actually landed another cracking rainbow of about 3lb which also fought like stink leaving my hand shaking. Again, very close in – about 5 feet out from the edge. I went as far as the 30 mark on the dam and after a few more offers was finally broken by a ridiculously powerful snatch. The weather had really brightened up now and yet I knew it was time to go, I had other plans and that break off signaled a convenient end to proceedings 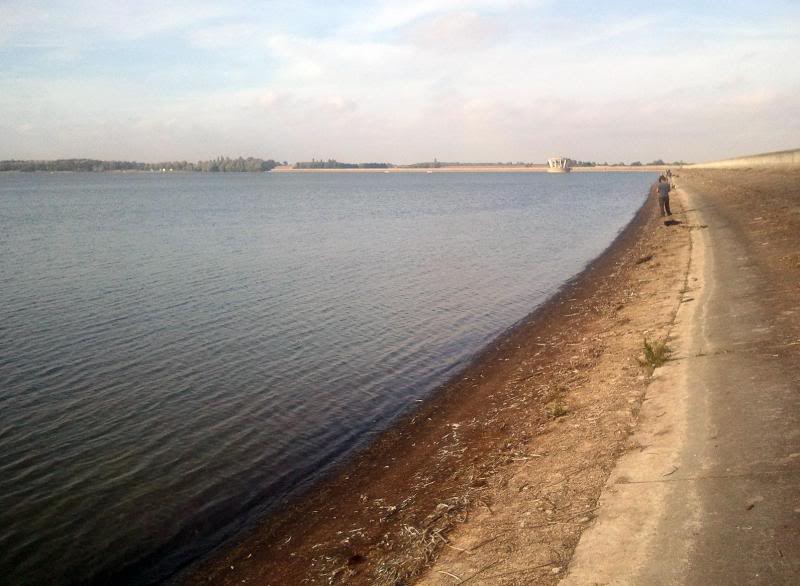 You can tell by the way I waxed lyrical over a single fish that I really enjoyed my day, a real revelation that I could still get that excited by rainbow trout fishing. I’d happily go back again, and probably will as we get deeper into autumn and the fish will be either even more obsessed with the shrimp or switched onto fry – either way I’d say that’s a winner.

I was however a bit saddened to see a number of large coarse fish carcasses rotting on the dam. I think they were bream (or maybe carp?!) and I’m wondering if anglers terminated them and left them to rot? I hope there is another explanation for them being up on the dam. Could cormorants have done this? 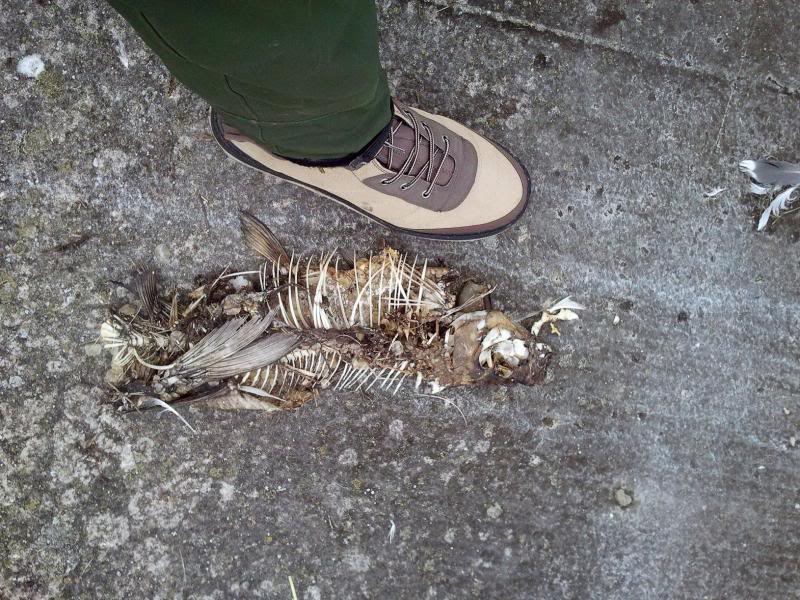