It went a bit like this. “Hi Andy, can I get a lift with you if you’re off down to Carsington on Saturday?”

“Ok nice one Andy, see you then”

<uuuurrrgh>Thankfully he couldn’t hear my heart sink over SMS. 5:45! What in God’s name have I done, I can’t get up that early!

The admin alone was terrifying, my tackle was all over the place and where exactly did I put my net? Plus, the small matter of what to put in my sandwiches. In the end I settled for a simple slug of meaty goodness in the shape of German peppered salami avec chorizo with a splash of hot chilli sauce 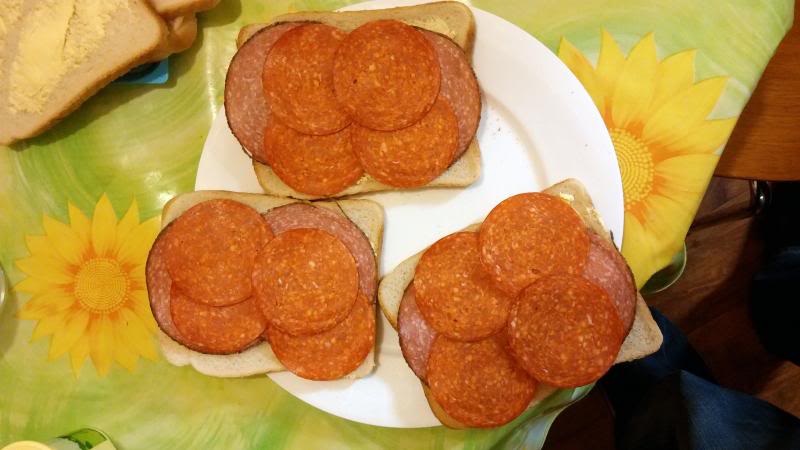 Much to my surprise though I did manage to get out of bed on time and we had picked up Kev by about 6 am before making our way onto the M1 to drive down to the Peak District for my first day’s fishing of 2014!  We did however make a pit stop at the Junction 29 truckstop to rendezvous with Matt and take on some fodder. I had the Jumbo breakfast and boy did it hit the spot, £5 well spent I can assure you. It didn’t steal too much of our time either, because we still managed to get to Carsington for before 9am where booking 9 of us in took almost as long as breakfast did! We do tend to over-complicate things wherever we go. 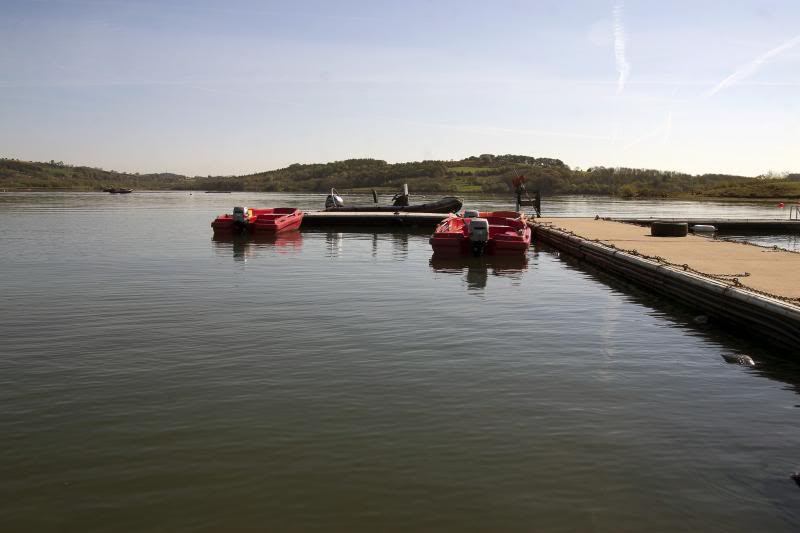 There was the usual pre-fishing banter as we set up our rods in the anglers’ car park and (as I later found out) I was a little rusty post-closed season – I somehow managed to miss the 1st ring on BOTH rods whilst feeding my line through! This ensured I was just about last to head out to the jetty. Seeing as my boat partner Stu had only just set off from Leeds I went out in a boat on my own but couldn’t venture too far from the jetty seeing as I’d have to motor back in sometime soon.  I wasn’t too fussed though for it was a truly glorious day, perhaps not so good for fishing but delightful nevertheless. Sun screen in May – good times! The water was very calm and there was barely a cloud in the sky which was reflected in the lack of rising fish, just the odd one here and there. 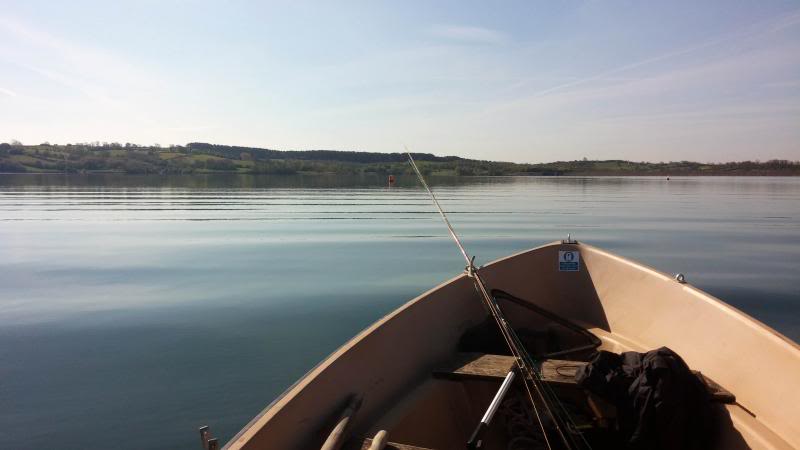 I had a good go with buzzers on the floating line setup, including the sexy little red bead numbers I’d knocked up earlier in the week but the ungrateful b*stard fish didn’t seem to appreciate them. I reached for my trusty Leeda Dragonfly II rod, purchased way back in about 1998. I can still remember the advert that helped sway me to buy it, proudly proclaiming that this rod had been designed using computer technology.  On this mighty wand I had administered my similarly aged WF7 Scientific Anglers intermediate line and a black and fluo green Fritz lure. “I’ll just get a fish under my belt then I’ll switch back to buzzers”.

The lure outfit hadn’t worked. We motored  out and headed into the Southern end of the reservoir but this didn’t fill us with optimism so swung around and eventually settled on the narrow bay on the East side. 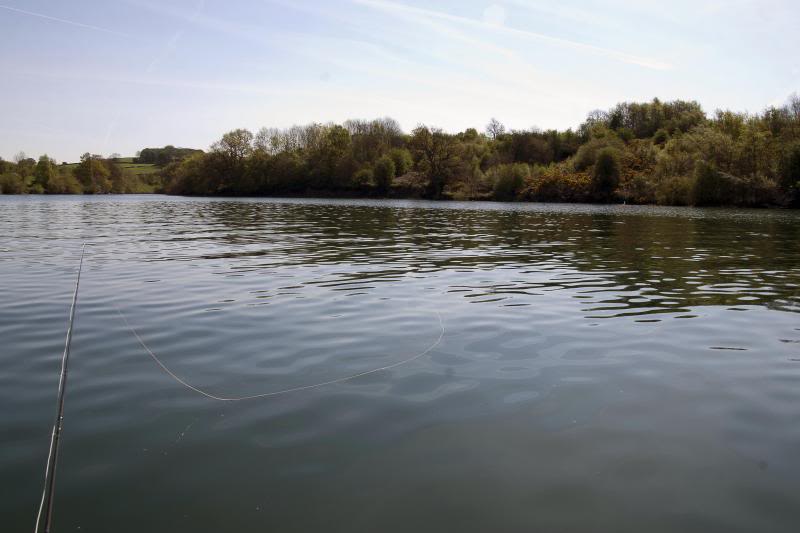 Again I persevered on the floating line and buzzer combo but not one bite was forthcoming. Back to the lure rod but this time a pearly white fritz job. Second cast, about 4 feet down yank yank off. Hmm, that’s encouraging. Third cast thump, pull..fish on!  A good fight was had and it was all visible as the water at Carsington is so clear for a reservoir it has to be seen to be believed. We were both just glad that we’d got a fish to the boat

Sixth cast, YANK! Another! ” Good work Bob” cried Stu as I played another vigorous Carsington rainbow of about 1.5 lb. these fish fight hard. I lost this fish just before netting it but I wasn’t too disappointed because next cast I hooked into another which I managed to land. ” Nice one” muttered Stu

By lunchtime I’d actually only landed 3 but played and lost another 6 or 7. We met up with the rest of RFF for one of our ‘floating lunches” and compared notes, I was only one behind Fishfinder General Northy and one of our  boats was missing, Kev and Andy had to motor back in with a split fuel pipe on their outboard. 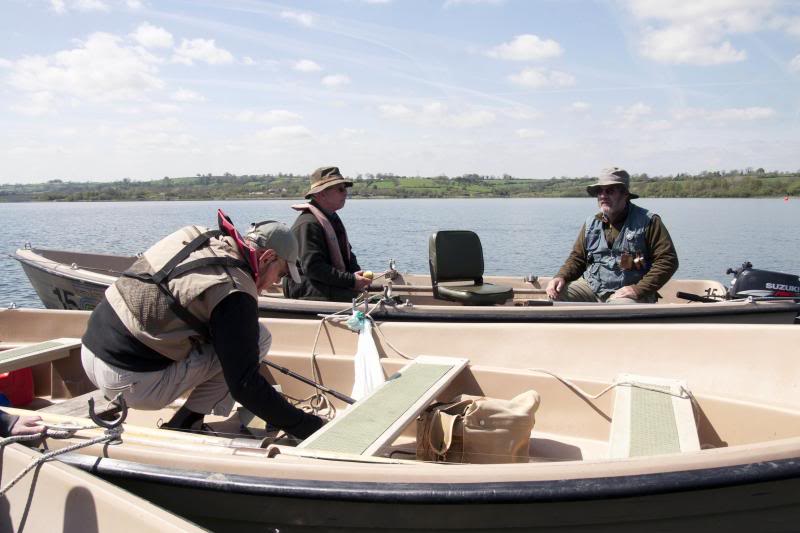 After eating most of my delicious sarnies we motored into the North ‘arm’ of the reservoir and had some limited success just past the Big Island. Alas the success still hadn’t rubbed off on Stu. I offered to lend him the winning fly but he accused me of patronizing him so I caught another fish. To be fair, when the shoe is on the other foot and it’s me blanking whilst my boat partner canes them out I am usually inconsolable by the end of the day and vow to quit flyfishing etc etc. 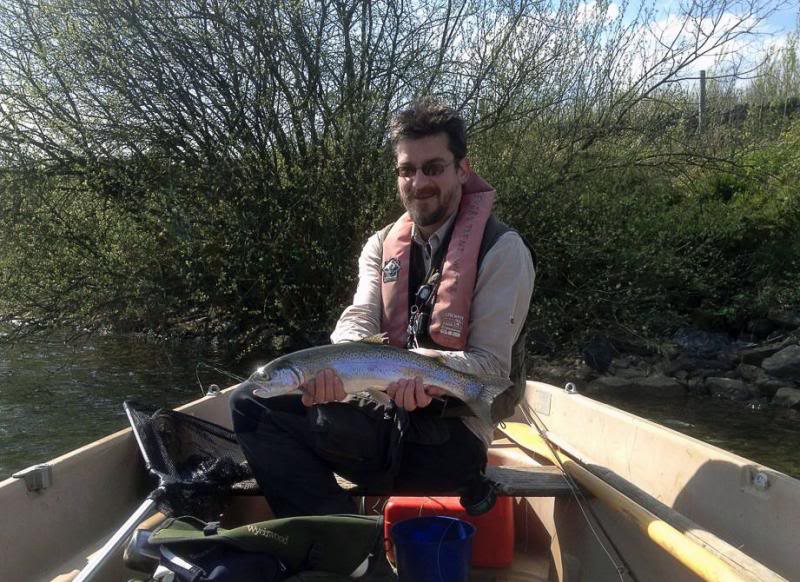 Father, forgive me, for I have held a fish closer to the camera..but everyone else does it!

Our last session was along the shore in front of Middle Wood through to Stitch Plantation I think. I had another good patch here as did Matt and Andy pictured below in dynamic angling poses. 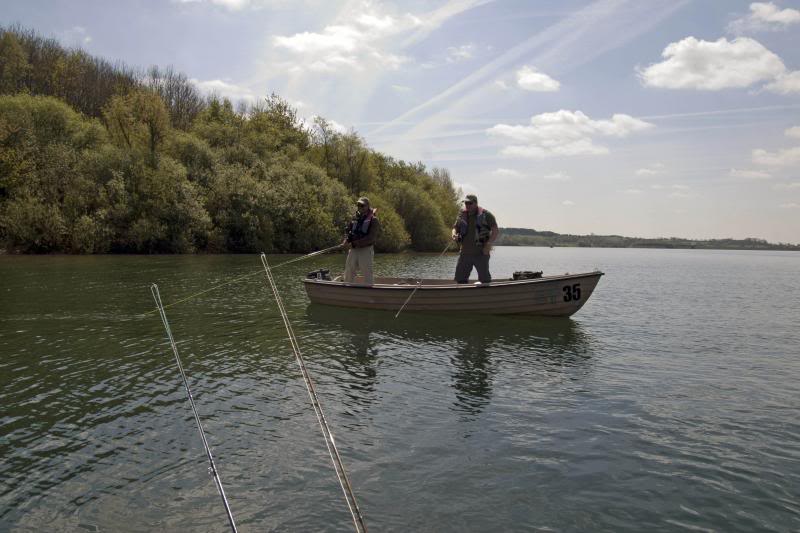 Poor Stu was not happy, RFF fishing rules dictate that fish caught after 5pm don’t count and it was knocking on for that now, nobody likes to blank, you can forget that twaddle about just being out to enjoy the scenery and fresh air etc. But wait! Like a visit to Winston’s, this tale has a happy ending. I was genuinely relieved to glance over my shoulder and see Stu’s line slipping away into the crystal clear depths with a bullish Carsington rainbow on the other end 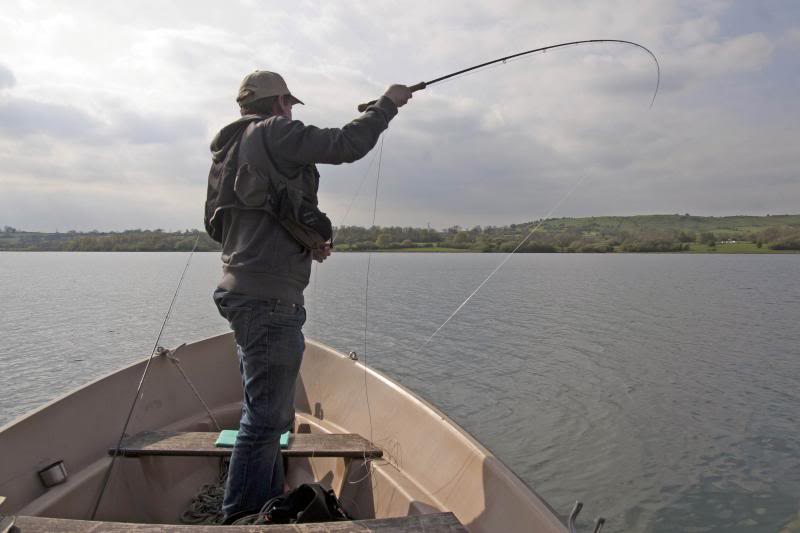 I finished the day with about 7 to the net but had lost at least as many again. Not a winning tally, that went to Matt and Northy both on 10. Oh but I could’ve been a contender!

The fish in Carsington are incredibly strong and know all the tricks in the book – once again I’ve had a really enjoyable action packed day whilst rainbow trout fishing and in such pleasant surroundings. It seems my concerns over a lost Mojo were premature although I still have some inner doubts over the ethics of rainbow trout fishing – vast amounts of smaller aquatic life being killed and made into pellets to feed up a non-native fish which are then dumped off a truck into a reservoir for us to catch, be it a day or a year later.  Sounds bad when you put it like that but we all know it simply isn’t that black and white. 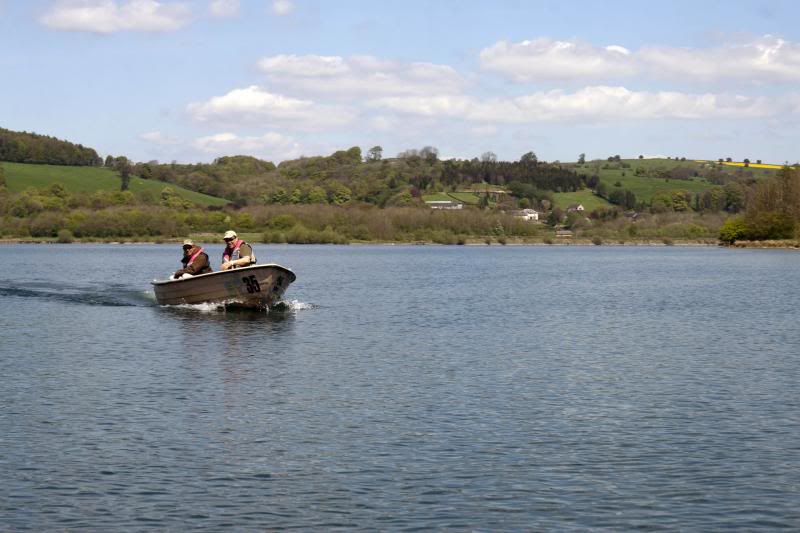 Who’s up for Kenley airshow? Pretty decent line up. Food in the mess sounds pretty good as well! @cosfordairshow @airtattoo

The curious case of the missing cordura hangers on my Wychwood wader bag...a terrifying tale of one man's descent into middle age cantankery https://yorkshireflyfishing.org.uk/2020/02/waders/