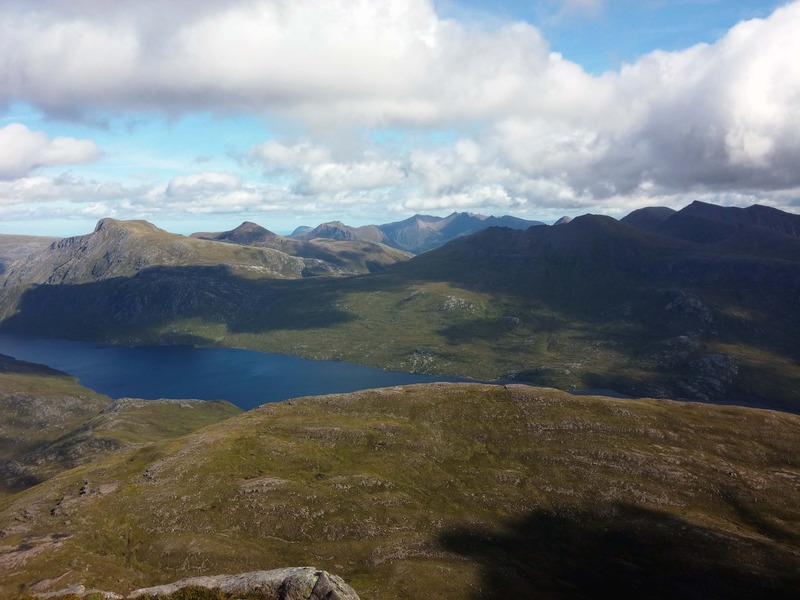 It’s a crazy mixed up world out there people. Here I am writing a post about my second trip to Gairloch this year when I haven’t even written up the first. Shit’s got reckless. Thing is, this will be a lot quicker to write up seeing as it was just a long weekend and also I’ve also done most of it already in a trip report for Walkhighlands. As such, the style is a little different and it’s a bit less sweary which is no bad thing.

Ever since June when I was in Wester Ross for the annual fishing trip I’ve had a hankering to return and carry out a specific mission I’d put together after looking at one of the Torridon maps. In August I finally got to do it. An 8 hour drive from Leeds on the Thursday got me to Big Sands campsite just outside Gairloch which is a great mix of stunning scenery, lots of places to get tucked away from everyone and yet good facilities – an ideal basecamp before the big event. I had a very pleasant evening just relaxing with a couple of beers at the tent and a post super-noodle saunter along the beach. 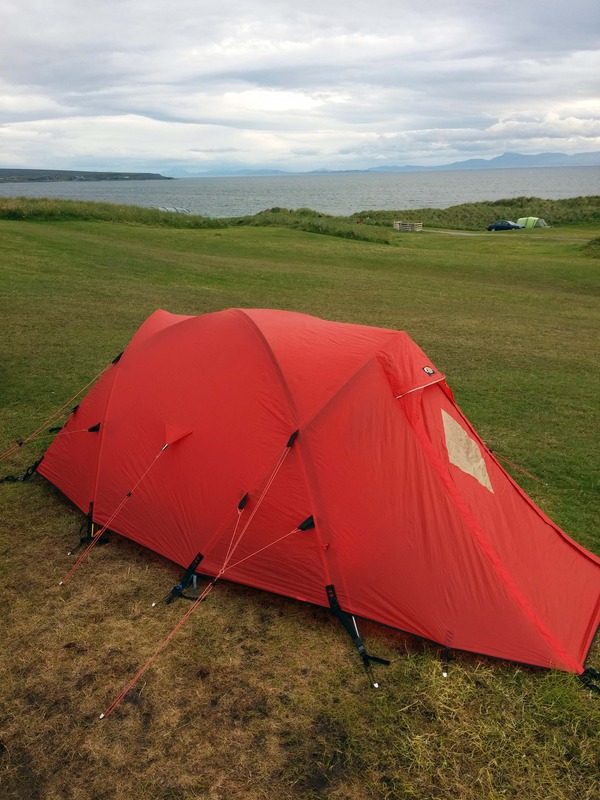 Friday I packed away my shit then loaded up my 65L rucksack with a stupid amount of stuff. I had about 5 litres of fluid alone, more if you include the whisky! I drove out to Incheril, parked up, left an ‘if not back by’ note in the car and set off along the standard Slioch route. Just as I was leaving the car park an RAF C130 Hercules came over as low as you can fly in the UK without getting a book thrown at you I imagine. Spectacular, I was jumping up and down like some kind of excited simpleton and waving at the crew! Anyway, on with the walk. Of all the things I did over this weekend you would think walking through the wood alongside the Kinlochewe River would be the least risky but it was here the path edge collapsed on me causing surprising bruising to my ribs as I went down like an absolute sack of shit, presumably the pack weight made it worse. Whatever I did took 6 weeks to heal! Rather than turning off the path after crossing the river I continued following the course of the Abhainn an Fhasaig all the way up to Lochan Fada. 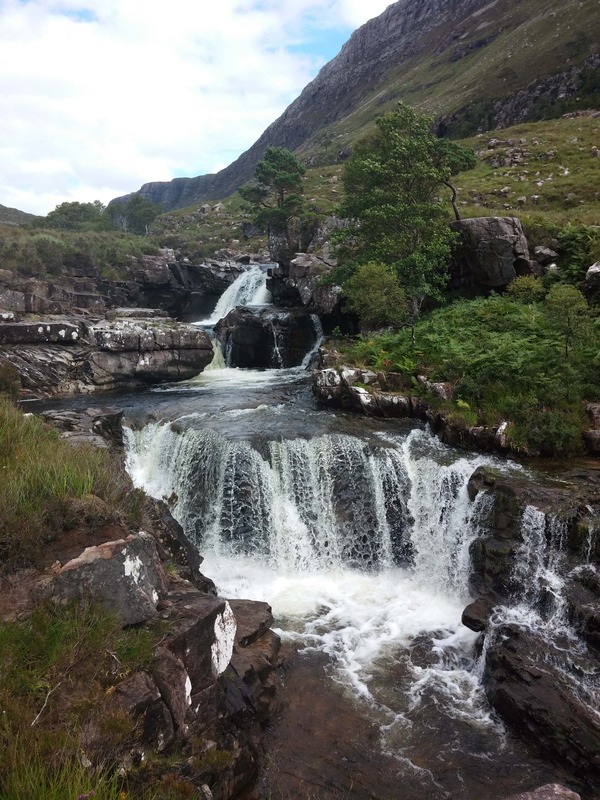 I knew first thing had to be get the tent up which took some time as there are very few places near the loch which are vaguely level and not a bog. By the way, I am fully aware that my erection could be better…I did re-peg after this photo was taken, stop judging me,  STOP JUDGING ME. 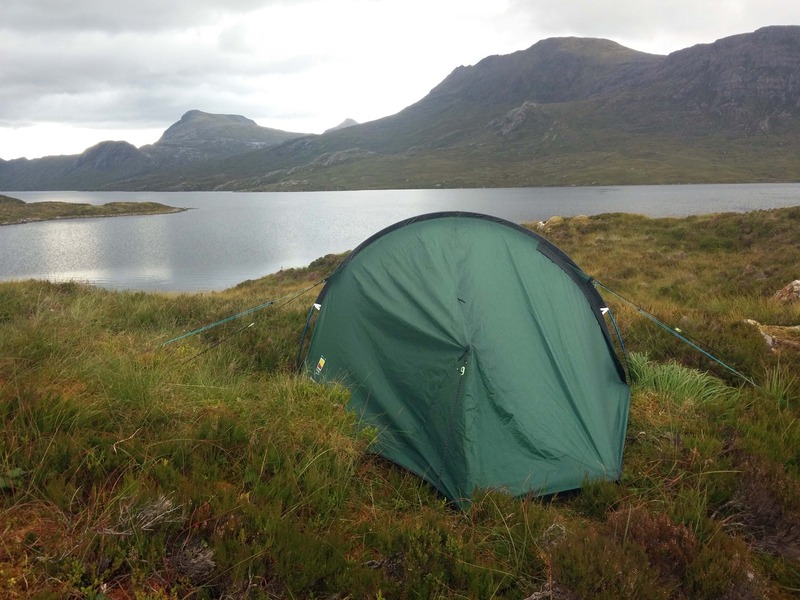 Once this was sorted I brewed up and considered my options. The weather was very changeable and made me dilly dally about going up Slioch now or tomorrow. By the time I decided to go it was 3 hours to sunset which didn’t allow enough daylight for unforeseen disasters so instead tackled up my fly rod and toddled down to the water’s edge.
Tackling up a fly rod even with 2 or more flies is usually simple but biting waste nylon off and moistening knots with spit whilst wearing a midge net on your head is no fun. Even momentary exposure was intolerable, Fada is one of the most impressive midge venues I’ve ever been to…and I’ve been to a few! After an hour of no offers I retired to the tent to work at my hip flask and read a good book. The sunset was ace but the midges made taking a photo just about unbearable. 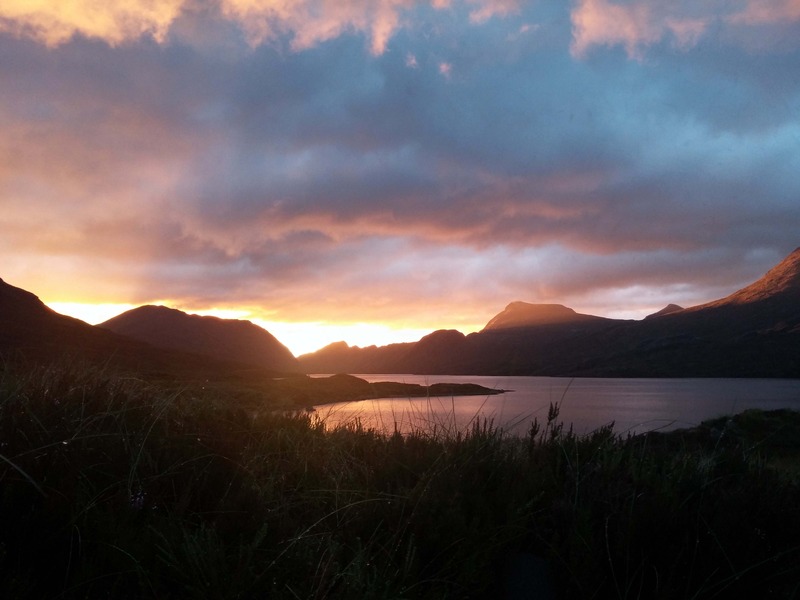 Time spent alone up on a remote lochside in the hills is a good way to put yourself in order but also a grand way of scaring yourself. If I’m honest with myself I don’t think I’m cut out for the SAS. I awoke in the wee small hours to hear something scratting at the tent, God knows what, so I used the ubiquitous “schwee gerwaan schweee” noises that all animals clearly understand to mean go away. I awoke again to hear heavier noises and deep coughing, the sort of noise an axe-murdering pyscho makes before he pulls you out of your tents and does real nasty things to you. “Just a deer” I reassured myself and gradually nodded off again. Gradually.

Next morning started well. Early mist burned off and it was dry so after a brew and some instant porridge I braved the midges and headed back down to the loch. 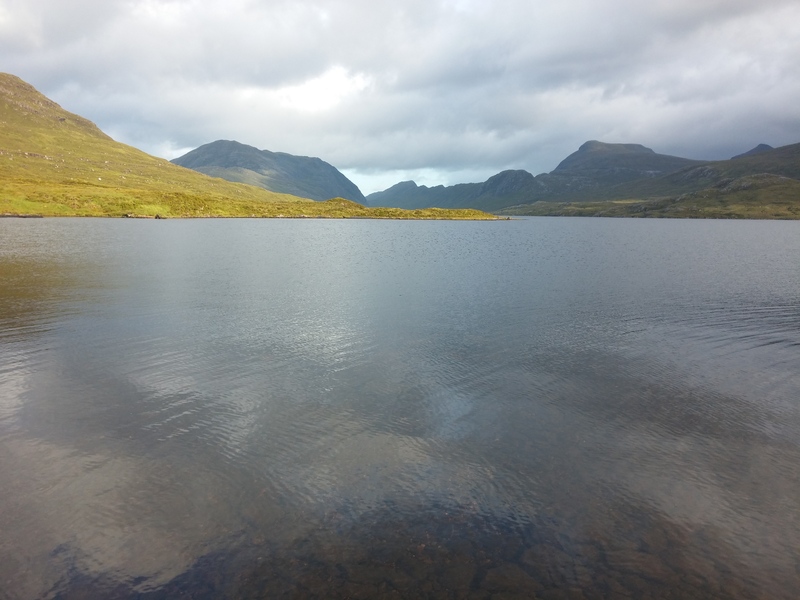 After a short I while managed to winkle out a nice wild brown trout which had some interesting markings, the red spots only ran down the back half of his body. ‘Isn’t that unusual‘, as John Wilson would say 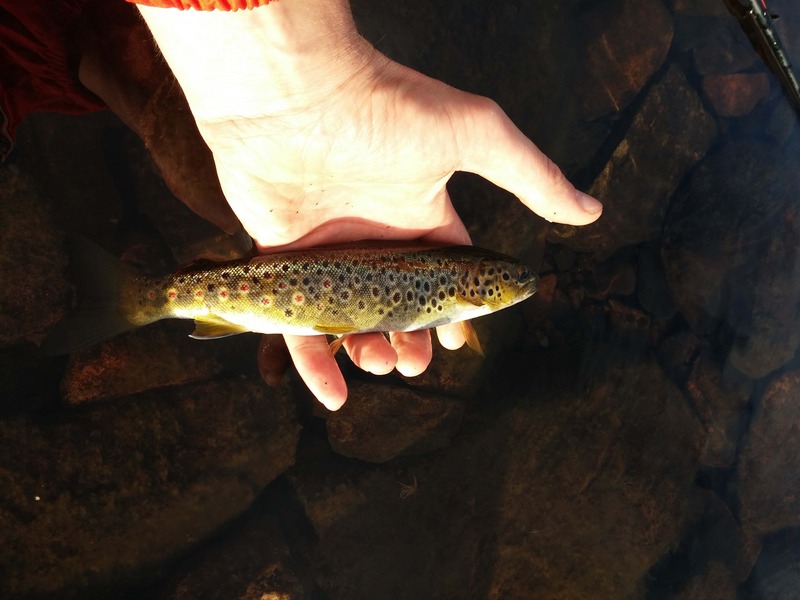 I fished a bit more but really I’d done what I needed to in terms of fishing this loch, at least this time round.I packed away my stuff and headed for Corie Tuill Bhain where I’d already planned my exit onto the ridge. When I got to the Corrie my plan to exit left went out of the window when I figured the back wall looked perfectly doable. It was…right up until the last 20 feet or so when I found myself kicking steps in the near vertical mud and grass and grasping at tufts of grass and loose boulders. Climbing up a coire wall carrying such a heavy pack is very different to just having a daysack. Goddamn idiot! 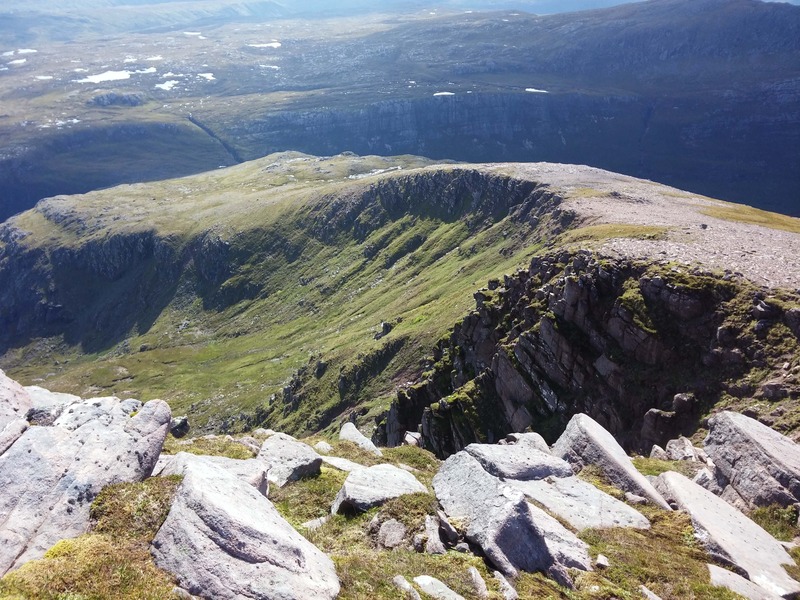 Once on the ridge I breathed a sigh of relief and made my way up to the first peak, Sgurr an Tuill Bhain. The views were already blowing me away! 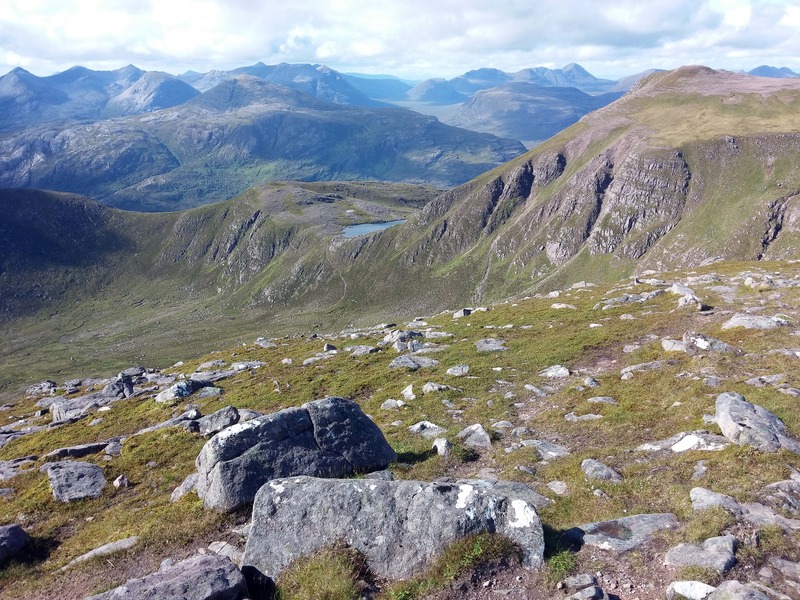 An enjoyable ridge then takes you over to the true Slioch summit which gave more incredible views, this time over Loch Maree then I hunkered down at the second and lower peak which has the trig on it. 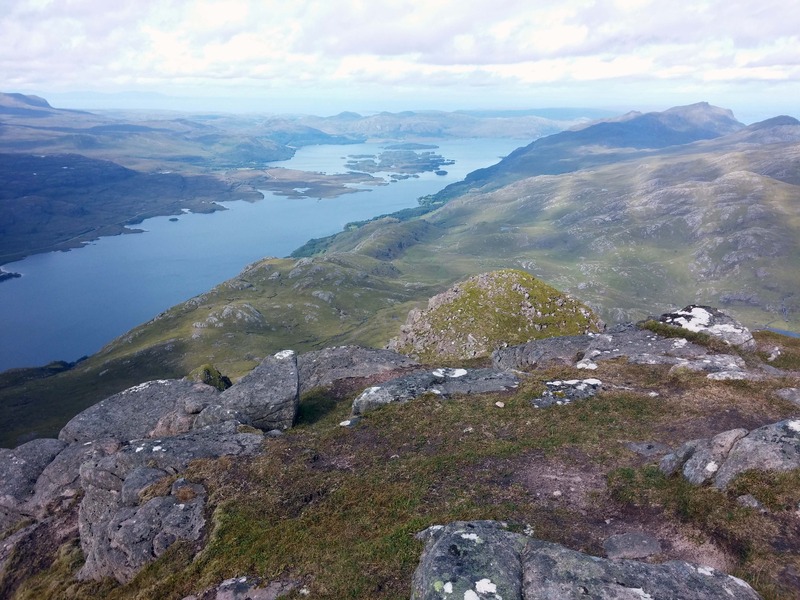 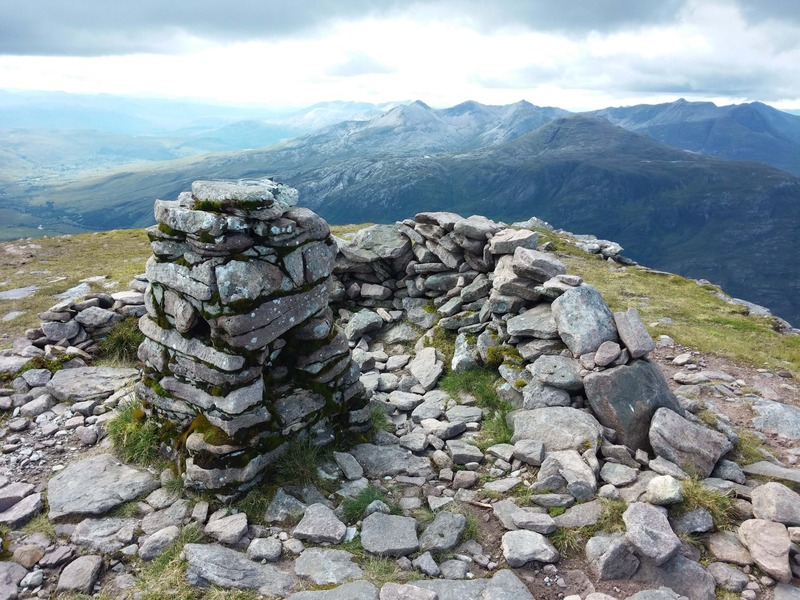 I must confess by now my back was not happy about bearing the burden of my overnighter load even if it was minus 5 litres of fluid! My descent off Slioch was the standard one and seemed to take such a looooong looong time but then everything seems to take a long time when you’ve run out of fluids. (my pee was dark rusty brown when I finally squeezed one out later that evening. That can’t be good ). I encountered a handful of people coming up and some were seeking confirmation from me that they were heading in the right direction as the path is in places pretty sketchy heading up into Coire na Sleaghaich. Part of me wanted to try and cadge a spare can of pop off one them but thankfully pride kept me from doing so!!

Thankfully my car was safe and sound back at Incheril, I shouldn’t have worried too much this is Wester Ross not Beeston. I drove back to Gairloch and fired down a whole host of fluids before hitting the Mountain Coffee Company bookshop which had a fine selection of books including some good outdoorsy type stuff.

Boy did I need this weekend. Summer has been pretty shit really and Gairloch in June was cold and dreary so this little last hurrah topped up the happy tanks. I had reservations about doing a thousand mile round trip and spending all that money on petrol just for 3 nights but it was absolutely worth it. 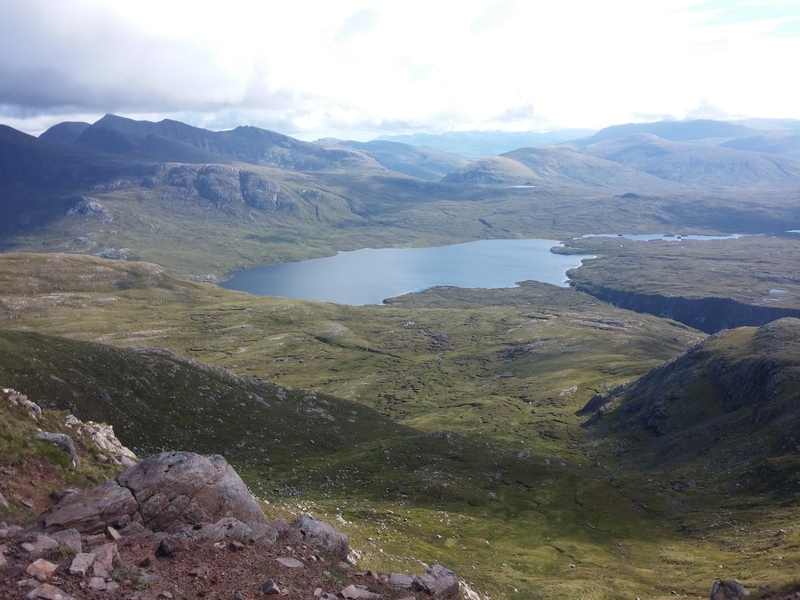 PS If you are at all tempted to fish Fada you may want to think very carefully about whether or not you can face midge levels of this magnitude. I had to repeatedly wash my tent inner when I got home because it was carpeted in dead midges and actually stank of dead stuff! I still wouldn’t have it any other way though because selfish as I am at least the midges keep some of the riff raff away from the hills. 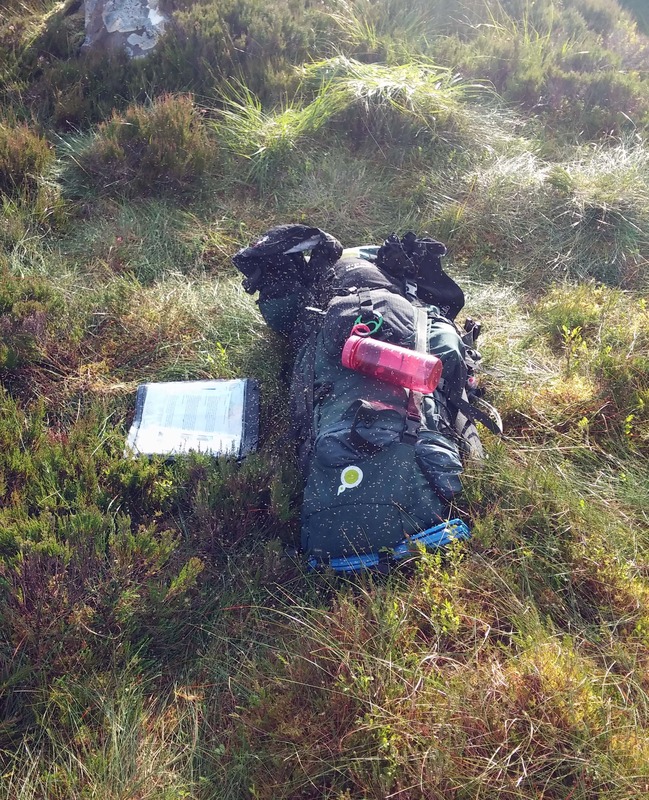 6 thoughts on “Return to Gairloch”