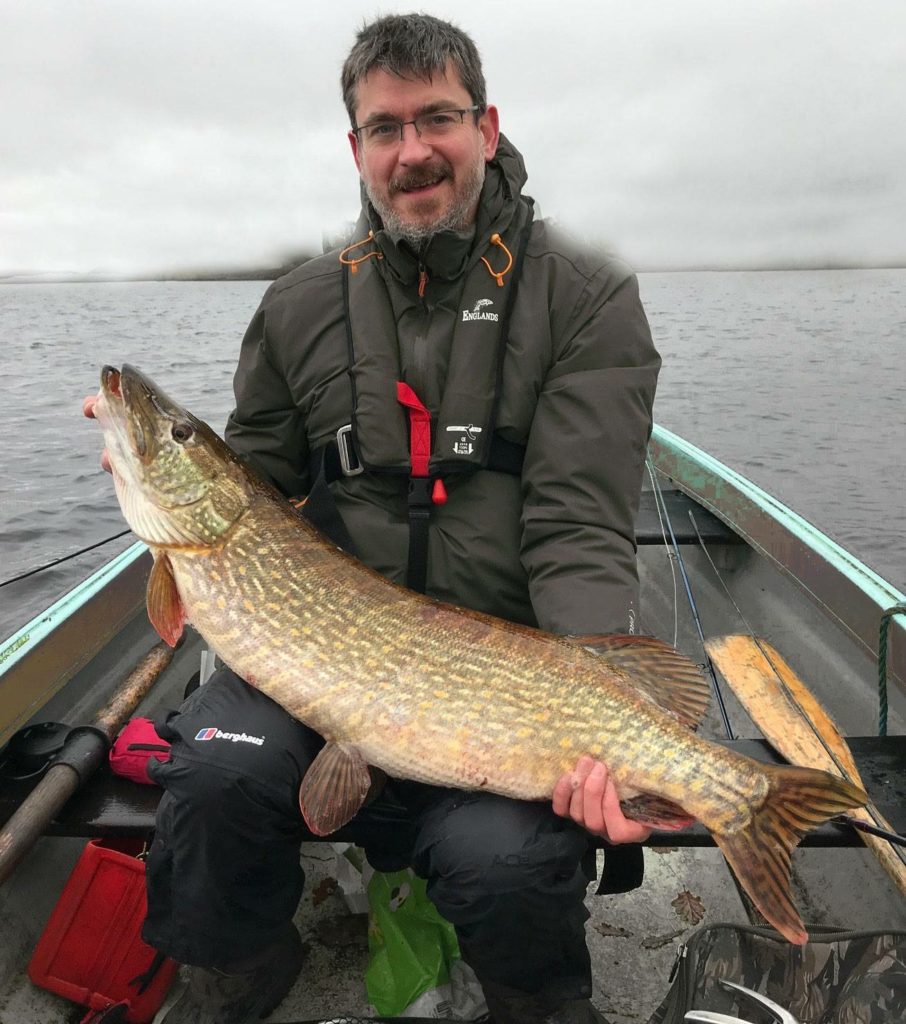 Evening folks. Still not even started this year’s annual fishing holiday blog but in the meantime here’s a quick post about a pike fishing trip with Stu last weekend which resulted in me catching my biggest ever pike! It is precisely because I caught such a big fish that I have to be incredibly vague about where I caught it which is a shame as I’d love to extol the virtues of the venue but I would be contributing to its demise.

We had originally planned to spend 2 days fishing this bit of water but Saturday’s forecast was gash so we decided to go down Thursday night and just fish Friday. We were staying in a pub and after getting the first pint in I was about to ‘check in’ on Facebook when a portentous feeling stopped me from doing so. Don’t tell ’em Pike! We played it safe and only had a couple of beers before retiring to our room to try get an early night in readiness for an early start.

Friday morning was dreich as the Scots would say but at least it’s better for fishing than blue skies and blazing sunshine. Stu has fished this place before and we headed out in the boat to try his hot spots where he’s caught a fair few pike from previously. Full of early morning enthusiasm we stuck to just using our fly rods but try as we might we couldn’t get a single offer despite using both floating and sinking lines and various flies. When we got to his final ‘hot spot’ we had another fling with the fluff before switching to lure and jerkbait. Half way through the drift I got a good, solid hit on my silver 40g Abu spoon (I’m old skool!) and struck into a pike. ‘It doesn’t feel massive ‘ said I, clearly not having a clue what was out there. The fish didn’t take much getting to the side of the boat and made it’s first appearance. ‘Not bad actually’, changing my assessment. ‘ The fish then rolled on it’s side. My eyes widened somewhat. ‘Whaddya reckon Stu?’

I wasn’t convinced. When he got it in the net I still wasn’t convinced. Neither was the fish, it heaved itself out of the net and crashed back into the water and headed off into the distance. Stu panicked at the thought he’d lost my fish but it was still firmly attached and I just knew it wasn’t coming off but the ensuing 2nd fight  certainly indicated the pike had now woken up. When we finally got it in the boat and onto the unhooking net I could see all 3 hooks were fully embedded and it wasn’t pretty. We had a couple of goes at trying to unhook it before I decided to stop f*cking about and deployed the bolt cutters to sort it all out and get the fish weighed. When I saw it hit 25lb I immediately doubted my ability to read the scales to passed it to Stu to confirm.

incredible, my biggest ever pike by a country mile (minus a pound for the net). A few quick photos then I cradled the fish in the water to try let it recover which I kinda botched as she slid out of my grasp too early. Thankfully the moment she felt free she woke up good and proper and went off strong. I had exciting visions of this now turning into a red letter day with plenty of fish to follow but the reality proved to be rather different. One more fish came to the boat, to Stu’s jerkbait outfit which is so stiff he wasn’t actually sure there was a fish on until it surfaced! It was no leviathan but still a most welcome catch as it meant neither of us had blanked. <pic to follow>

I’ m looking at the picture again as I write this, what an absolute slab! It’s huge. Basically I got lucky, and there’s a good chance that is the biggest pike I’ll ever catch!