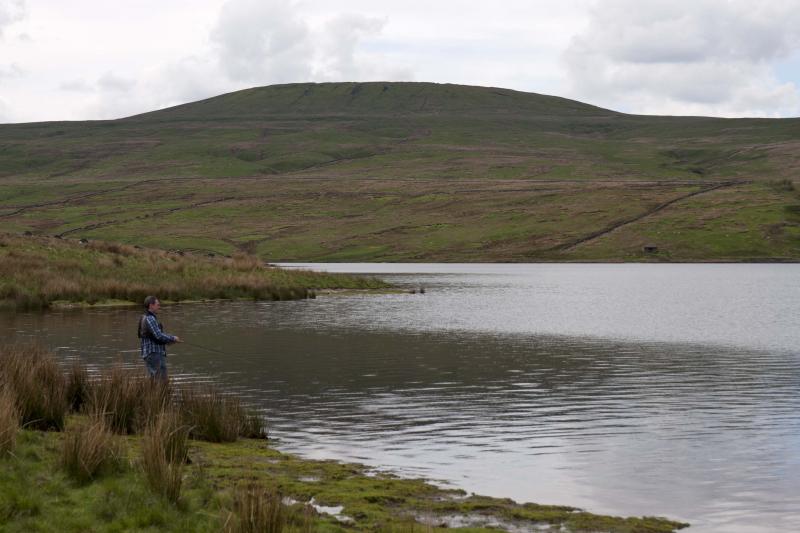 Well would you believe it, a new fishery ‘review’! I’ve concentrated very much on the blog the last couple of years but as Scar House is a classic Yorkshire venue it really needed its own entry in the Fisheries section rather than a blog post that gets lost off the front page after a few months.

Scar House is about 10 miles North West of Pateley Bridge as the crow flies and permits can be bought from Nidderdale Angling club via the Spar in Pateley Bridge for the princely sum of £10 each. I’d heard of this water but not really done much research until Stu suggested we pay it a visit over the bank holiday at which point I had a quick peek on the map.  Not enough of a peek as it turned out, what I assumed was an access track coming off a B road turned out to be unsuitable for vehicles – well, certainly not Stu’s vehicle anyway! Luckily someone was able to point out the correct access road which actually runs alongside the River Nidd.

We parked up at the car park and picnic spot just before the dam and walked down the track alongside the South bank until we spotted a suitable access point.

I think we both immediately got a great feeling about this place, it had been a nice drive up through picturesque scenery and the reservoir was just as pleasing on the eye. To the North there’s Great Whernside at 604  meters and further out to the East you have Great Whernside at 704 metres and then the dam itself is an impressive feature. What’s more, there were a few fish moving and I’ve fished enough upland reservoirs to know that we’d fallen lucky – you’re just as likely to spend an entire day at these places and see not one rise! We plotted up at the first decent ‘beach’ we found and tackled up then I proceeded to eat half my packed lunch whilst marveling at the yellow auto-gyro buzzing around overhead – not sure I’ve seen one outside of an airshow. 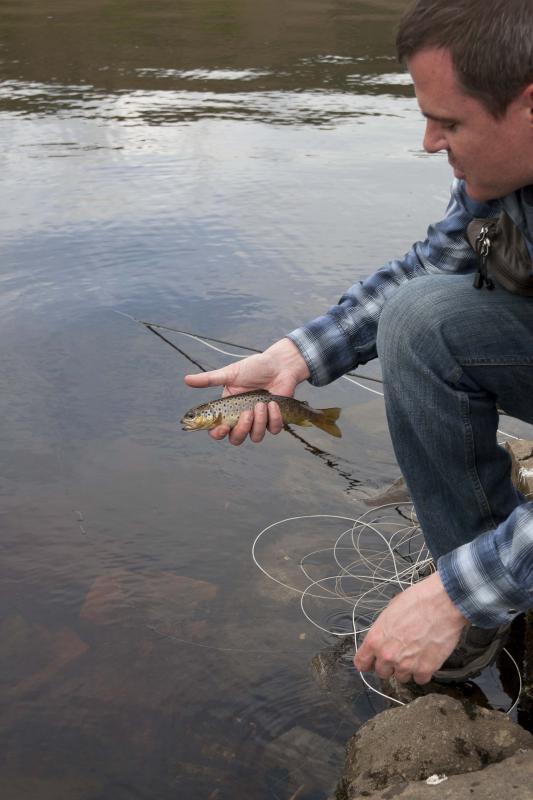 I’d tied some flies especially for this mission, and I put one straight on the dropper in the shape of a size 12 black and orange Bibio along with a similar sized Mallard and Claret on the point. Naturally they attracted little interest apart from one or two nips and swirls. Stu was the first to catch with a typical little hard Northern brownie pictured left, caught on a claret bumble. I ran over to take a photo in case it was the only fish we caught all day!

I changed my flies and tried to keep moving as is often recommended when fishing for wild browns but success was eluding me. I finally managed to hook into something and get my string pulled for a short when I put on a Klinkhammer although me and the fish parted company before I’d managed to get the net into the water. Encouraging though, and it’s always nice to watch a dry go under. I also snipped off the dropper, which didn’t really seem to be adding any value to my fishing. Ha, I almost forgot – this was the first proper outing for my homemade Fullers Earth mix and you know what, it worked perfectly!

As we worked our way along the Southern bank it became too steep to stay at the water’s edge so we detoured up onto the top which gave us our first view of the dam at the Eastern end, draining out of Angram. This is another impressive feature! We decided to drop back down to fish this bit as it looked..well..fishy. We all know how fish like features and there was plenty of that going on with narrow channels and moving water etc.

I spotted a fish repeatedly rising a few feet out from the bank, maybe 15 yards away from me and dropped my Klink right where I figured he’d be heading as he hoovered up whatever abundant insect was taking his fancy. It landed perfect, my best cast of the day and sure enough gloop it went down in a swirl.  Pause..strike, he’s on, and he stays on for a spirited fight before he’s scooped up into my net. Not a monster but another perfect example of a wild Yorkshire brown trout.

Fun ensued, there were quite a few little brownies at this end of the reservoir and we made contact with many and landed a few of them. This flurry of activity was enough to round off the day and meant our original plan to fish all the way around Scar House was curtailed to allow a visit to the Bridge Inn on Low Wath Road for a pint (Black Sheep I think) 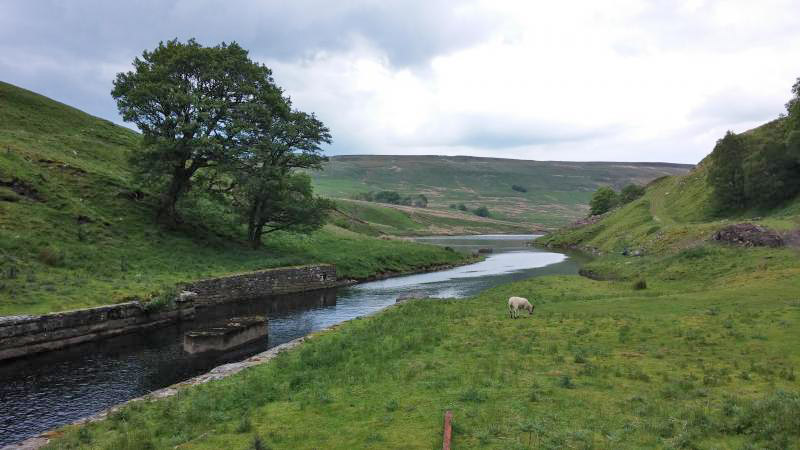 This is a real Yorkshire gem, I’m glad we made the trip out to fish it and well worth a return visit as there’s lots to go at. As mentioned earlier, tickets are issued by Nidderdale Angling, make sure you read the rules on their website.

It’s a real privilege to be the custodians of this unique aircraft, an aircraft with such significant history that Aeroplane Magazine has just run an 8 page article on the VAAC Harrier as well as featuring XW175 on the front cover! XW175 is indeed a Legend of Flight Test.

Nice light in Leeds this afternoon

Top notch work from @ProfJGrey guiding me on his local stretch today. The pike weren’t playing ball but we fished hard and got some action at the end of a stunning winter day.

F*ck me that is grim

Toilet paper attached to fishing line from fishing match at York last week, the majority of match anglers stated alot of waste products travelling downstream with a pungent smell of sewage. Dilution is the solution or maybe no pollution is the solution.
#Pollution #sewage

Close encounter with a Mirage🤔