Aaaargh, summer is slipping away. this isn’t fair…I can’t handle another winter 🙁

Luckily we’ve managed to squeeze in another weekend fishing expedition to one of our favourite lochs, the name of which I’m afraid I can’t reveal, but some of you will no doubt recognise it. Now, bear in mind this was one night’s wild camping. How the hell did I need this much sh*t? 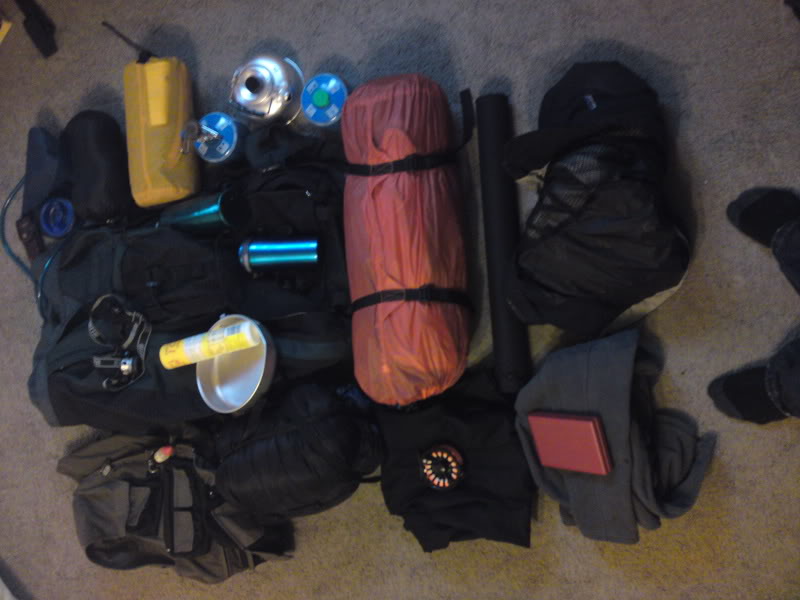 Not to mention the additional bin bag of firewood. Anyway, we’ve been going to this loch for many years and the walk never seems to get easier. We buy ever more expensive equipment designed to reduce weight, take up less space and generally  make life easier but this is cancelled out by old age and the desire to carry more and more of said weight saving items to maintain comfort levels for our slowly disintergrating bodies. I’m also doing more exercie than I ever have, but again, advancing age has cancelled all this out.

So yeah, anyway, getting to this place involves about an hour walk up a steep hill but the end of this hour brings a view which never fails to fill your heart with fuzzy-goodness. 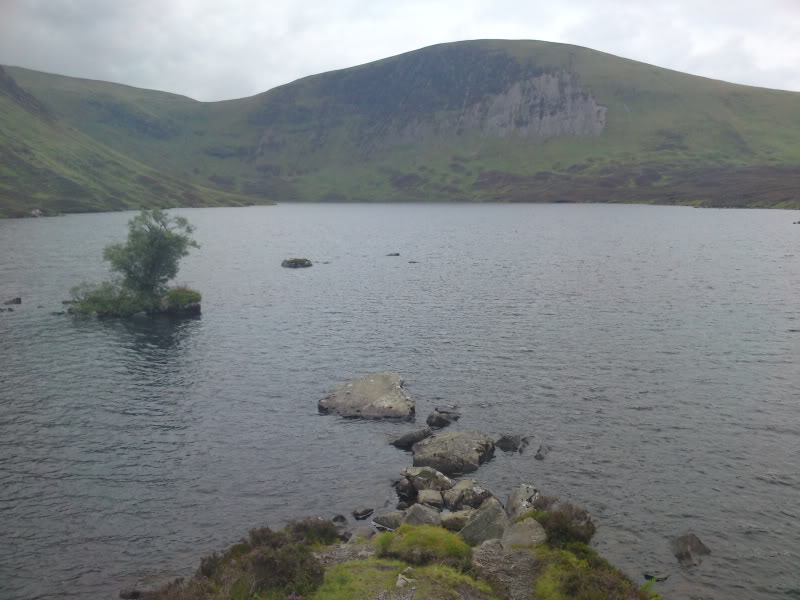 Then it’s about 35 minutes walk along a sketchy path over rough terrain (you know the drill, bogs, tussocks and general ankle snapping stuff). Here’s Stu skirting the bottom of the loch 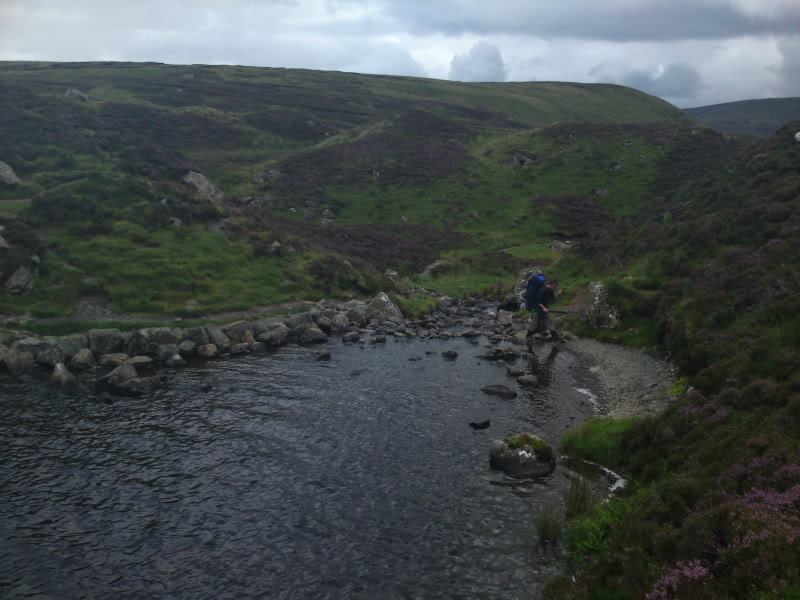 Upon reaching t’other end of t’loch tha knows, we pitched tents. We used to all share a single tent, but as dislike for each other grows year on year only 2 of our group can even stand to be in the same tent now. 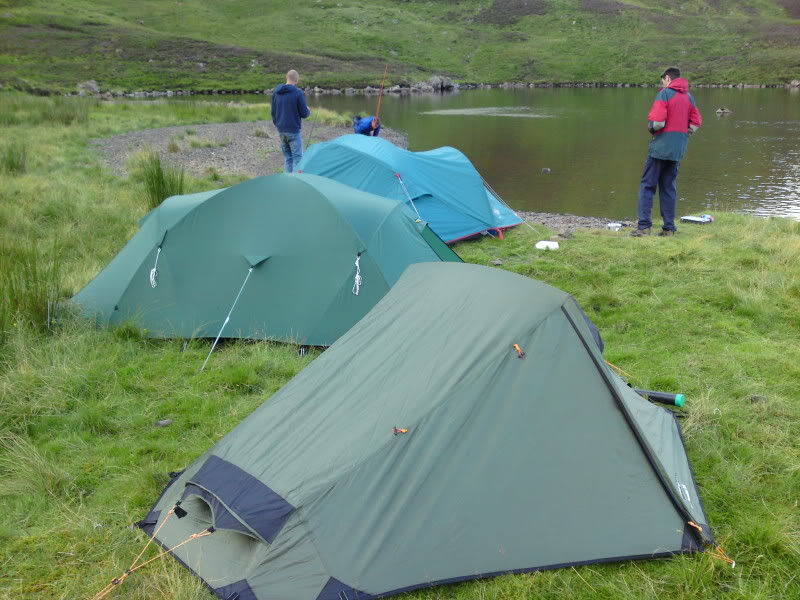 There were a few fish moving, in fact conditions were almost perfect for fishing but we were strangely unmoved, preferring instead to fire up a loch-water brew and carefully choose a location for the firepit. Eventually, I managed to get my ass into gear though and began fishing my favourite spots with 2 guaranteed fish-catchers at this place, a black pennel and Bob’s Bob fly. After half an hour I gave up. It was as if the creeping malaise had infected all living creatures up here. The fish were lazily mopping up something, and showed absolutely no interest in the artificial. Normally, if you drop a fly within a foot of a rising fish up here you’ll get an offer. I didn’t care, I looked at a little brownie as he slurped down another meal and shrugged my shoulders. I like to think he did the same…

No-one else was catching. No-one else even got an offer. We fished our usual spots with proven flies but it just wasn’t to be. It didn’t matter, just being up here was enough. 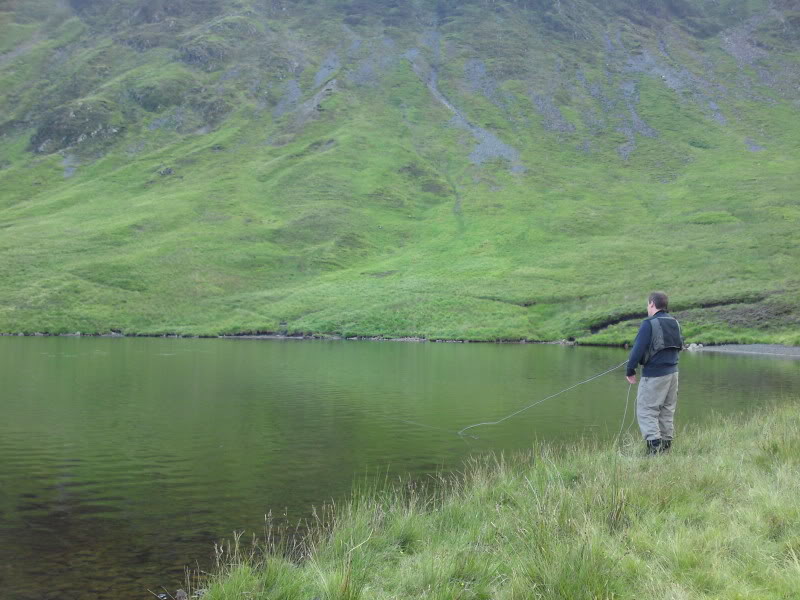 At 7pm precisely, Smithers could no longer be restrained. He lit the disposable BBQ’s like a man posessed and set about cooking our burgers, badly I might add. Dropping 3 burgers in a row into grit is not acceptable.  BBQ rules are not flexible, nor am I, and words were exchanged/spatulas thrown on the floor. Nevertheless we still managed to have a feast of kings whilst looking out on to the water and soaking up the scenery.  As the light faded, a dead calm fell upon the loch and the fish began feeding in earnest. It’s a cliche but it really did look as if it was raining (it wasn’t, ok) although my phone camera really struggled to capture the scene. 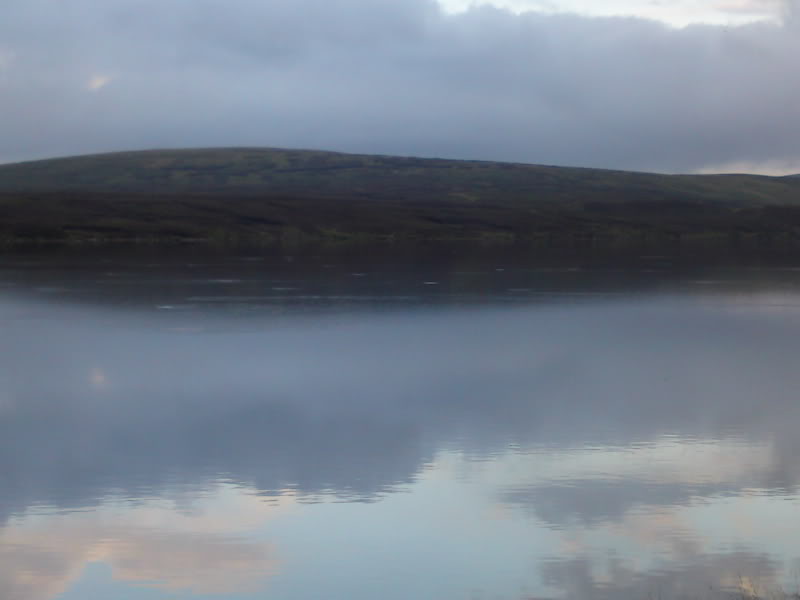 Perhaps in our younger days we’d’ve been going out of our minds trying to catch these fish, delerious with excitement but now, with some of us nearer to 40 than 30, it was enough to watch. Watch, and build a campfire to sit around drinking single malt that is. 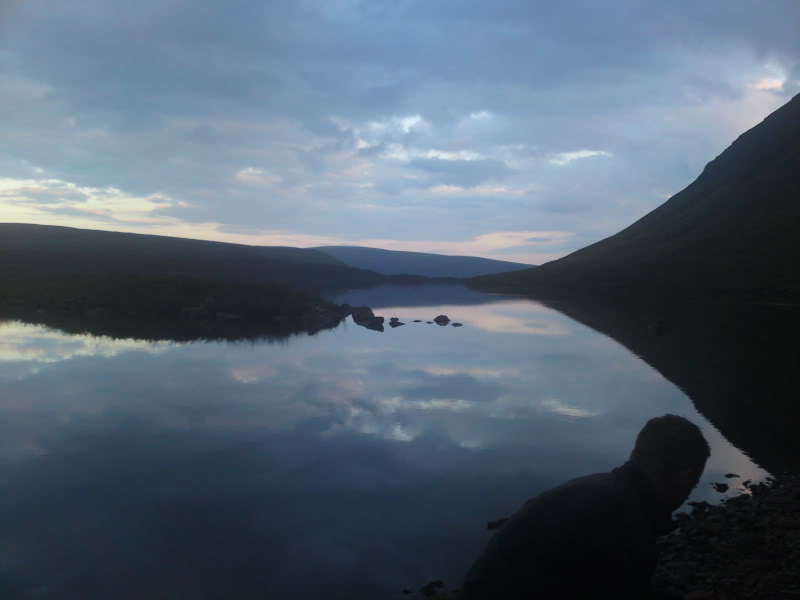 Another year, another campfire on our favourite loch. More grey hairs, same jokes, same topics of conversation, same round-robin of savage p*ss-taking. I wouldn’t be surprised if we were all sat at the same place in 10 years time doing the same thing, still wondering why none of us are married whilst getting p*ssed and behaving like 15 year olds…

Morning came, and surprisingly no-one had a hangover. I was greeted by this wonderful view when I opened my tent. 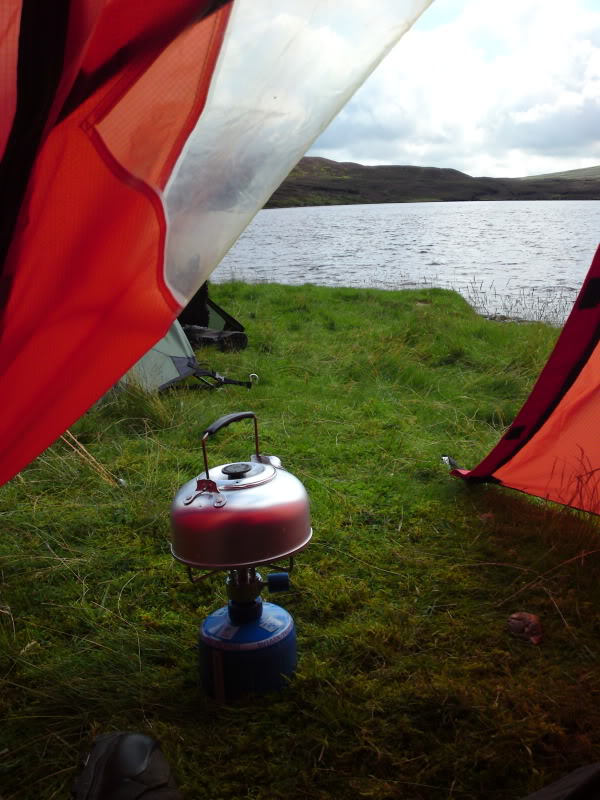 This view, not so nice… 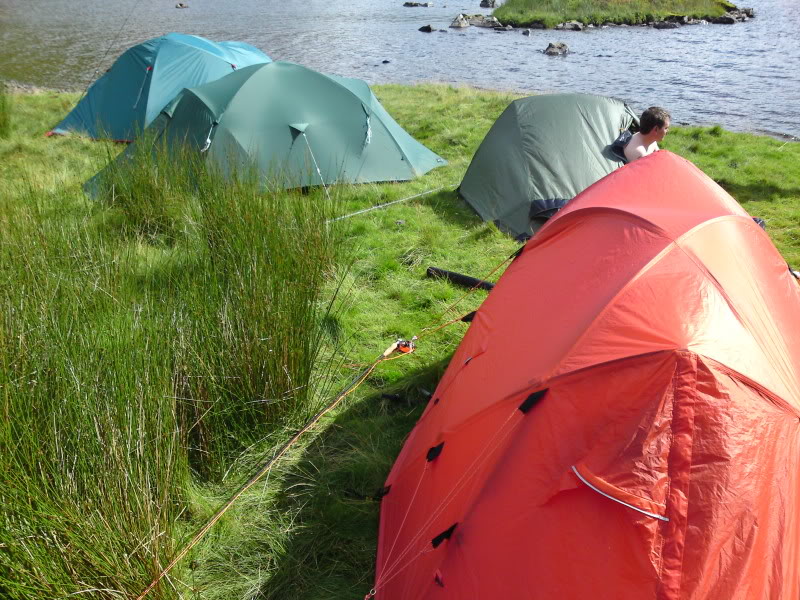 We’d planned to stick around until about 4pm on the Sunday but once we’d consumed breakfast, spent an hour or so not catching any fish, and packed down the tents we decided to get set off on the journey back. We did however spend some time collecting rubbish left up here by thoughtless b*stards. They are the reason I can’t tell you the name of our favourite loch, because like many places it risks being spoiled forever.