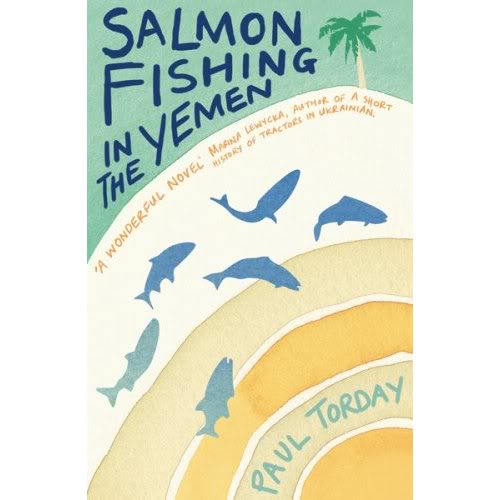 I can thoroughly recommend this book! I picked it up in a charity shop for a quid, absolute bargain.

In brief, a Yemeni Sheikh wants to bring salmon fishing to the people of his country so that they too can experience the pleasure it brings him. A downtrodden fisheries scientist, Alfred Jones gets landed with the task of making this happen,  as vote-hungry government figures see potential in what initially seemed like a ludicrous idea. The ramifications for Alfred, and pretty much everyone else who gets involved in this project, are life-changing.

The humour is often very dry, and sharp to the point of being chemically sharpened. I genuinely laughed out loud  on numerous occasions whilst reading it at my desk at work. It’s also nice to read angling related literature that is so original – the genre is normally limited to non-fiction ‘How To’ or ‘I did..’ books. I wish I’d come up with such a brilliant idea. I like writing, and had hoped to write a novel that included a central character who went flyfishing. All I came up with was the notion of a detective who was also a passionate angler, often retreating to the river bank to find solitude, escapism and answers to the cases he worked on.

Chapter One. The Headrow Murders

The D.I narrowed his eyes, and peered out of the nicotine stained blinds in his office. Rain lashed against the window as he gripped the ‘phone tightly with 20 years’ worth of cumulative stress and aggravation.  “Greendrake, you sonofabitch, where the hell are you, the Chief Inspector’s just been in my office, mad as hell. He wants your badge and gun, and so help me God I’m this close to giving it to him”

“But sir,  I’m on the river bank. I’ve just landed a chuffing great fish. And whilst in the post-fish-catching-zen-like-calm, I watched an upwing hatch from the surface of the water, at which point I had a flash of inspiration. Don’t you see sir, it’s been looking us square in the face. The  Headrow Murderer is progressing through 3 different stages of killing. Like a Mayfly sir, going through the different stages of….”

Needs more fleshing out, I think……..