“Gentlemen, this is trip 2, multiple anglers, multiple boats. Your training is half over.  The competition for the RFF Trophies remains tight. First place, Iceman…”

Anyway. The weather had been shit for the past week but on the day of our visit to Coniston the sun was out and the rain had actually packed in!  Myself and Stu polled up at about 10:30….only 90 minutes later than we’d planned, and took out the last remaining decent boat. I felt compelled to fish my favourite Consiton spot, just off the reeds and lily pads near the boat house but after an hour of sweet FA we moved on. This brought us out into the general throng and we discovered that Matt and John were embedded among moving fish in the relatively shallow water around the island, and had caught a couple.

Green buzzers they said. Green buzzers! I tried every bastard green buzzer in my box, as did Stu but we did not catch anything. Lunch came as a welcome respite if I’m honest, and gave me a chance to catch up with members old and new. That’s right, new members! Andy and Neil had come along to see how we roll in the Roundhay Fly Fishers, Christ knows what they thought of it all but good to have them onboard 🙂

After lunch I pretty much gave up on the fishing for most of the session when I realised I could sprawl all 6 foot 5 of me out in a complicated but relatively comfortable position involving gunwales. The sun bore down on my puny white skin with a glorious Vitamin D bath whilst Stu gently rocked the boat with every cast and for that brief shining interlude not one f*ck was given about anything.

Meanwhile, Matt & John continued to catch more fish! We had originally started fishing near them again in order to capitalize on their success but eventually it became a miserable experience watching them frolic around in their fish catching frenzy so we pulled up our anchor and left them to it! Thankfully, Kev and Doug (pictured below) were blanking which made me feel a bit better about myself. How nasty am I? 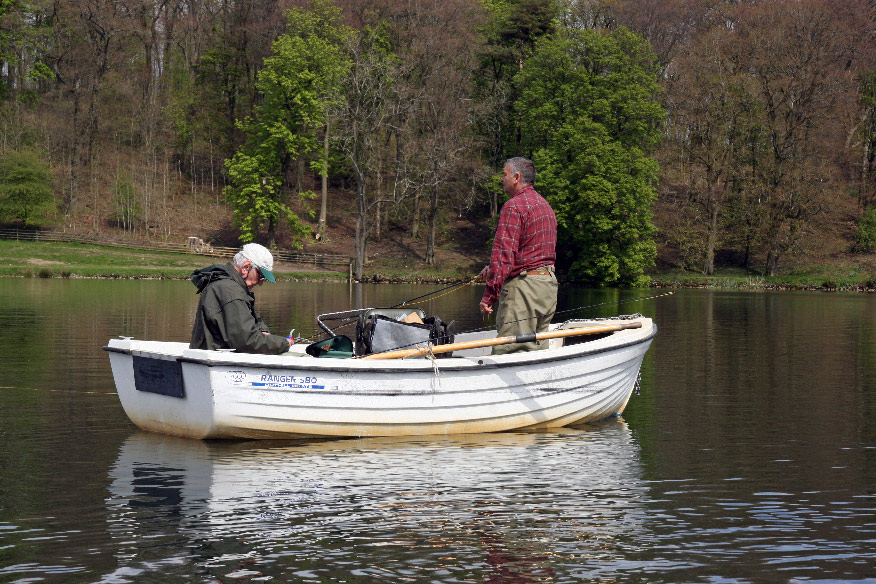 At least Stu carried on trying and his efforts were eventually rewarded with a solitary rainbow at the end of the afternoon. 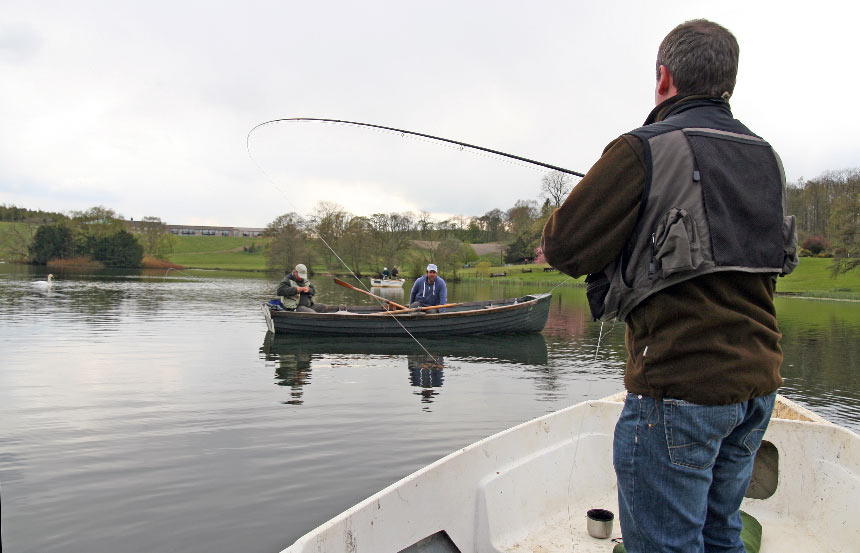 In the background you can see Andy and Neil, who also had the audacity to catch fish whilst I lolled around in the sun!

Clear winner of the trophy though was Matt with about 7 or 8 fish I think. Did you see how I did that? Did you see it? I started off enthusiastic about writing this blog post but about half way through I realised I was bored and it just tails off into utter obscurity. I’m back out on that boat, the rich aroma of sun roasted Barbour hat wax soaked with a decade of memories lapping at my nostrils.

2 thoughts on “Coniston Hall 5th May”