Regular followers of my blog may recall I made a brief post concerning Lyme disease several weeks ago but I have decided to put together something a bit more substantial and push it out to a wider audience. Let’s be clear, there’s a lot of information already out there by people with proper stethoscopes and letters after their names so I’m not trying to create another source of reference. What I am trying to do is raise awareness, like many have before me, and maybe save some people a whole host of nasty business in later years – people who wouldn’t normally chance upon info about Lyme. Plus,  I am starting to feel like I’m obsessed with Lyme and may one day end up sat at the kitchen table crafting a giant tick out of mashed potato unless I get this out of my system…so to speak

Prior to 2007 I’d never even heard of it. We were on our annual flyfishing holiday and had ventured further north than ever before to spend a week in Sutherland during an unexpected Caledonian heatwave. Consequently the 3 of us pranced around like tits in the Scottish Highlands wearing shorts and t-shirts pursuing wild brown trout in remote hill lochs and jolly good fun it was too. It was only upon chatting to a local that we discovered our attire was wholly unsuitable as it left us wide open to deer ticks which carried something called Lyme disease, and that we should also carry out in-depth self checking tout bloody suite. Back at our cottage, Phil was the first to disappear into the bathroom with a mirror, a tick removal tool and a grimace. We wished him luck but on his re-appearance he confirmed that he’d had several ticks embedded in a very special place discovered using a delightful squatting technique. The tool was passed along and myself and Stu took turns to slink off into the bathroom where we too discovered ticks in allsorts of nooks and crannies.

Since then we’ve considered ourselves ‘tick-savvy’ and our missions to Scotland are always punctuated with daily self-examination and prompt removal of the horrible little bastards. We also knew that if we got what was called a bullseye rash after a tick bite then a visit to the GP was required. I believe that few people are aware of even this information, so in that respect I was lucky. You can see where this is going.

Summer 2012. After a spot of mountain biking around North Leeds I discovered blood trickling off the back of my ankle and the wound turned into a dirty great big lump. I assumed I’d got a cut then got cow muck in it or something but was puzzled as to why I hadn’t felt anything. As the days went on a red rash spread out from the lump and progressed along my foot and up my leg. To make matters worse I also came down with a real nasty summer cold and my glands were up. The little white ball was spinning round the roulette wheel! It was only when I saw that the red rash was beginning to clear around the central ‘eye’ that it finally stopped spinning and dropped into place. Shit! Lyme disease! In Leeds!!! 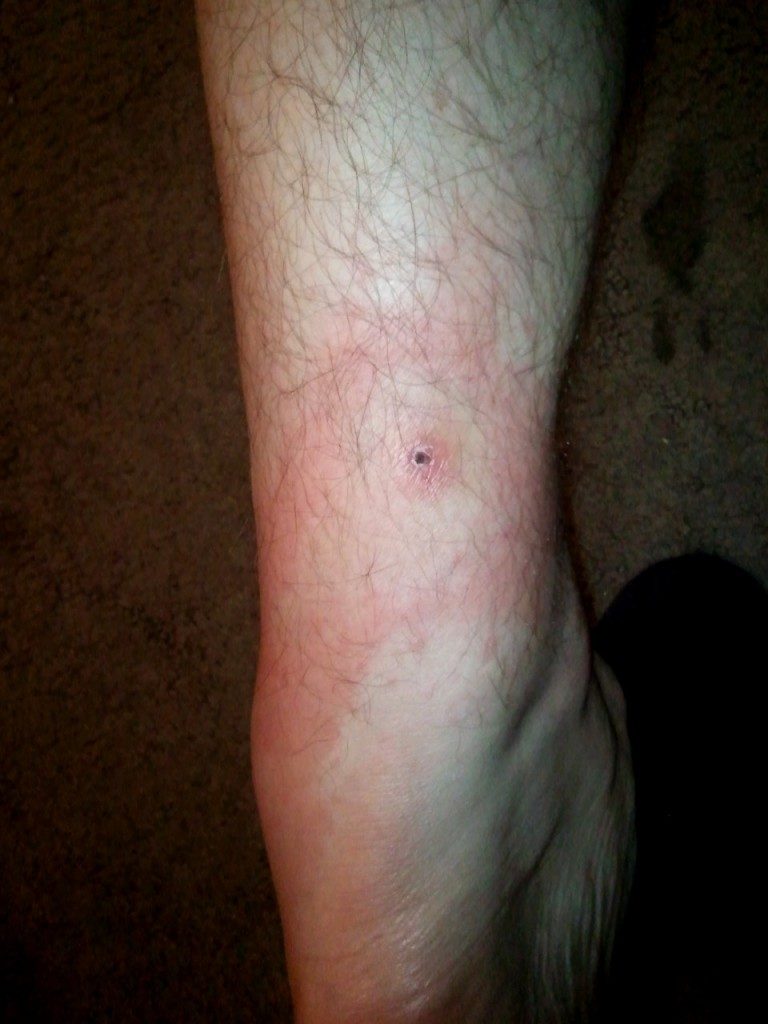 I could only get an appointment to see the practice nurse but they quickly dragged the GP in to have a look. We all looked at the reference pictures, at my leg, then back at the pictures. A few minutes later I was armed with a prescription for Doxycyclin and my bloods were on their way to a lab. I felt pretty down if I’m honest…why me? I began to develop an obsession with Lyme disease and read everything I could find on the web and in a way this helped. Well, that and the fact that the antibiotics kicked in after a couple of days and I started feeling loads better. After 2 weeks the pills were gone and so was the rash – time to move on. Not quite. Over the next couple of months 2 people I knew came down with Lyme disease and another couple got tick bites – all in Leeds – and in a way it was fortuitous that I’d had my brush with Borrelosis because I was able to point them in the right direction pronto! Lyme disease is clearly a much bigger problem than most people realise and even the NHS seems to be very inconsistent in its attitude towards it. Turn up at a GP in North West Scotland with a circular rash and flu-like symptoms and Lyme disease will be at the top of his/her list of suspects but in England you could be told Lyme disease can only be caught in Eastern Europe! This worries me greatly, enough to write this ‘article’ and push it out for wider consumption, because if left untreated Lyme disease can really ruin your quality of life.

When they’ve just jumped onto you and haven’t got much blood they are small, real small. They have 8 legs and look like tiny little crabs. If they’re starting to feed they’ll have their head buried in your skin and won’t brush off. 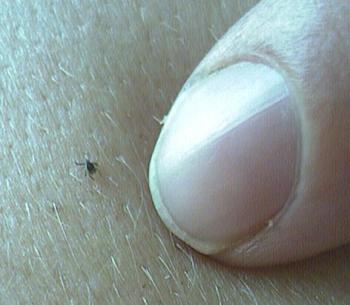 If left to merrily chug away on your blood they’ll get as big as a baked bean, sometimes larger!

Tricky one. From what I can ascertain, pretty much all obvious bullseye rashes are Lyme disease but not everyone with Lyme disease gets a bullseye rash! My symptoms were a nasty, angry bullseye rash, feeling ‘rough’, achey, with lurid phlegm! But wait, it gets worse! It seems that the standard blood test for Lyme is notoriously unreliable throwing out false positives/false negatives, especially if taken less than 6 weeks after the bite ( although a spinal fluid test sounds more accurate. That sounds nice).

What can it do to you?

If untreated you could get hit by anything from mild flu like symptoms all the way through to facial paralysis, chronic fatigue, crippling joint pain, altered moods and meningitis.

Can it be cured?

Errr…sort of. All the stuff I’ve read seems to suggest most people catch it in time, take the antibiotics and get better. Others (especially those whose initial symptoms are severe) seem to have a rough time getting rid of it and require prolonged treatment. The worst cases seem to be those who go years without knowing they have it and are riddled with the Borrelosis by the time it’s diagnosed but even then aggressive and extensive antibiotics courses seem to undo most of the bad stuff. Also, there are increasing numbers of people suggesting a link between Lyme and M.E (Myalgic Encephalopathy or Chronic Fatigue Syndrome).

How can I prevent getting tick bites?

Not as easy as you think. If you venture outside you’re at risk! Okay, that’s a little alarmist, but the ticks that carry it can be found on foxes, deer, sheep and Lord knows what else. Keep away from long grass, tuck your trousers into your socks and wear gaiters (let’s face it, if you’ve got your trousers tucked in your socks you’ll want to hide that fashion faux pas anyway). If you’re entering a high risk area go the extra mile and in addition to the above get some Lifesystems EX4

and spray the bottom of your trousers, socks and gaiters. This stuff kills the little bastards when they crawl onto the fabric whereas normal DEET based stuff merely repels them but make sure you read the label carefully. Wear a light coloured long sleeved top and tuck it in (the light colour helps you spot them). I’ve found ticks on my ‘love handles’ on several occasions! At the end of any day out in possible tick infested land do a full and vigorous body inspection…don’t forget behind the knees, behind your ears, perineum, backs of legs etc.

What if I do get bitten?

Don’t panic! Don’t rip the thing off, don’t smear it in vaseline, don’t burn it, don’t even use harsh language or long hard Paddington stares. Use a dedicated removal tool like this

otherwise you’ll distress the tick and force it to spew up its stomach contents into you thereby accelerating the process of passing the nasty bacteria into you. Buy a couple of packs now and have one at home and one out and about with you on your travels. Follow the instructions. If you do get a tick bit and develop any of the symptoms mentioned earlier get straight to the GP and discuss your concerns. If your GP gets all uppity and says you can’t get Lyme disease get a second opinion, this is not a disease to be taken lightly. Perhaps more importantly, don’t just rely on a half-assed article from a whisky soaked Internet blogger. If you’ve read this far I’ve managed to pique your interest …which was my intention…so now you should visit websites put together by those who really do know their stuff about Lyme