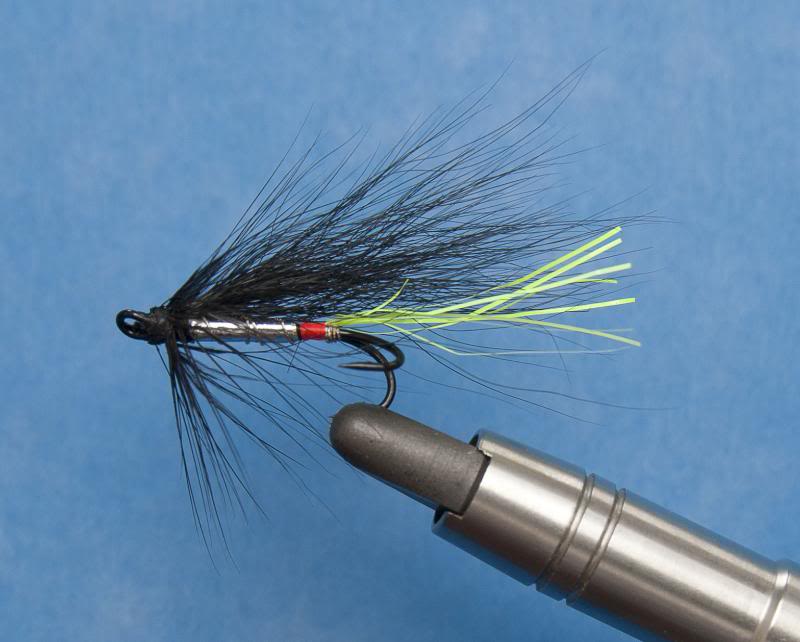 The winning fly tied by yours truly!

Thursday 20th March saw the world famous Roundhay Fly Fishers Annual fly tying competition held at a renowned events venue in Shadwell (the scout hut). As luck would have it, club member Martin (father of Count von Tittenstein) has saved me a job by doing a quick write up on the night so I’m stealing it to use as my blog post!

“Last night night saw the thrilling spectacle/debacle that was the 2014 RFF Fly Tying Competition, and the worthy winner was Bob Walker with the best Executioner salmon fly.  First one he’d ever tied too!
As entertainment, our Fly Tying Competition never disappoints – confirms the suspicion that we couldn’t organise a piss up in a brewery properly.
Not long after 8.00 and there were just 9 members in the stadium, only 5 actually tying.  Reg had his judges bench up and was busy doing judgy things.  Meanwhile, no-one knew what time kick off was, but some (aka cheats) started anyway.  Ha!  More fools them – turned out no-one was actually sure what fly we were supposed to be tying.  Utter confusion but no pandemonium.  Fairly quickly resolved by ignoring the judge and tying an Executioner.  All sorted?  Not really – some had size 6 doubles, others 8’s – level playing field?  Not in this stadium, not that it matters, and just to sort things even further, we were all provided with the most diabolical synthetic, plastic fluo lime green/yellow tailing material.  More static electricity than a set of nylon sheets – Doug was soon covered with bits of it, to which he added nicely by spilling his black varnish and panicking slightly, covered his hands, the table and some floor with that as well.
Quiet for a while – one withdrawal due to frustration with the electric floss – the Assistant Judge nodded off on the side lines (though he denied it) and we edged towards the finish.  Several had trouble with cock affliction though, best glossed over.
We ended up with 4 decent entries, and Bob’s was the best.  Reg said so, and Andy.  Confirmed by the tyer’s own vote as well, so two cups for Bob!
Thanks to Reg for organising, him and Andy for judging, others for heckling.  It is this sort of event that embodies the true spirit of RFF – nothing too serious, no falling out (not too much anyway), enjoyed by all.  Roll on Tanfield and let’s see if we can organise a sweepstake!
Martin