This pike fishing phase we’re going through is certainly getting us out to some new places. Our insatiable cravings for toothy tugs means we are venturing to the furthest corners of Yorkshire and beyond!  A couple of weeks ago we decided to visit Hornsea Mere. I know that naming lesser known pike fishing venues is not very wise but I think it’s safe to say that Hornsea Mere is not a lesser known pike fishing venue! It is in fact Yorkshire’s largest natural lake at 2 miles long and 467 acres (yeah I’ve been on Wikipedia)

As always we were in the pikemobile as Stu’s 2 seater can’t really take all the paraphernalia required for these mission. The dear old Mondeo needs a respray and I’m not completely ruling out a non-standard scheme. 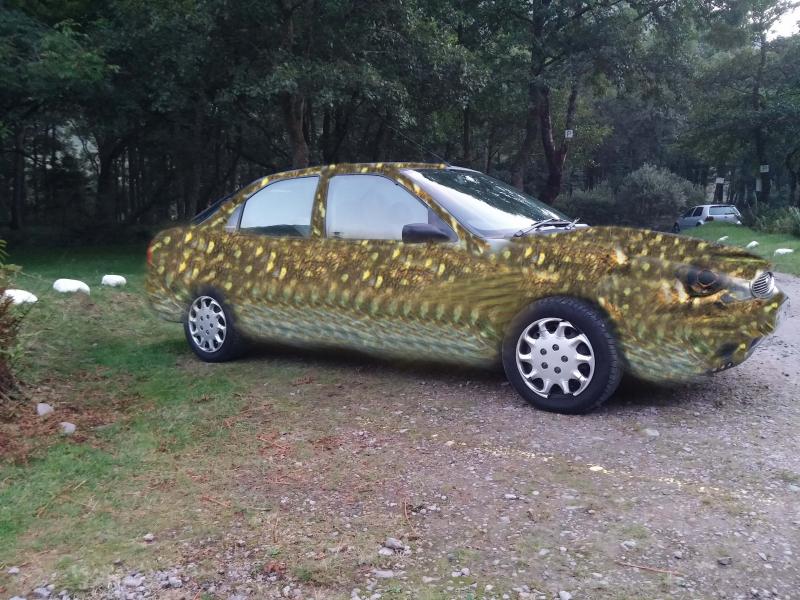 We got there about 9:30 ish which isn’t bad considering it’s about a 1 hour 40 minute drive away and we’re appalling at early starts. Before any fishing could begin we just couldn’t resist a cheeky bacon sarnie in the on-site cafe and mighty fine it was too. 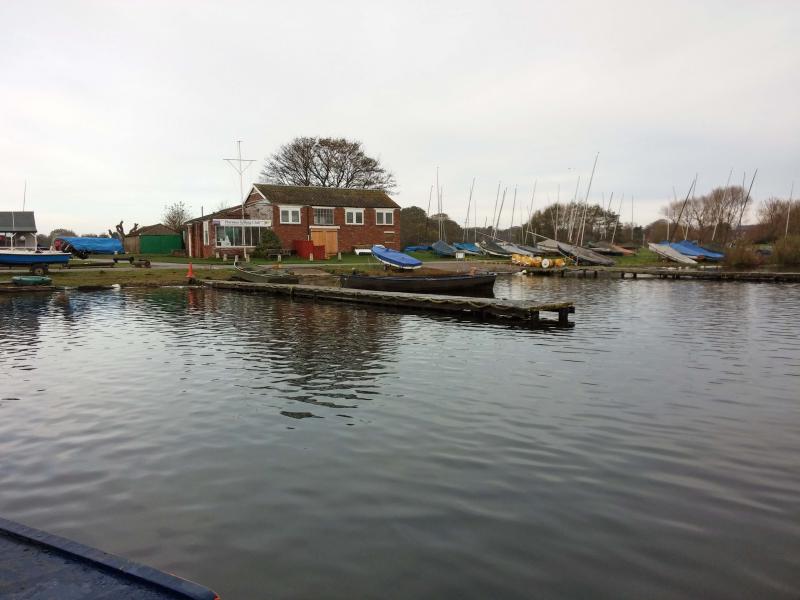 For fishing enquiries we were directed to a guy in the boat house who was very helpful, gave us some tips on where to go and sorted us out with a good boat which we could affix our electric outboard to. We set off from the pontoon and headed out towards the island, taking care not to ground the boat on the shallows that surround it. Here we drifted along the shoreline whilst I flyfished and Stu worked some jerkbaits. The water was incredibly clear which did not really help matters but it is nice all the same. 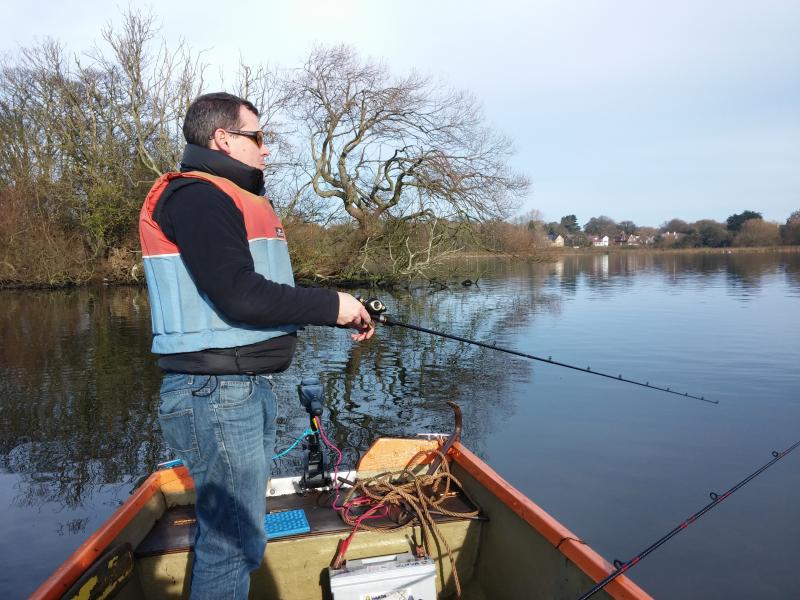 Nothing doing, we then set up some drifts in the area between the island and Seaton road which looked real fishy to me but again no bites. I switched between fly-fishing (floating line) and spinning (15lb mono with various plugs and lures) and Stu carried on with various jerkbaits and ever more exotic Squirrely Burts, Bulldogs and Christ knows what else but you know what, we had not one Goddamn offer. We fished further afield in slightly deeper water (although most of the lake is a uniform available depth of about 6ft because of all the weed) out to the West of the island but still nothing. Blue sky and bright sunshine…grrr. 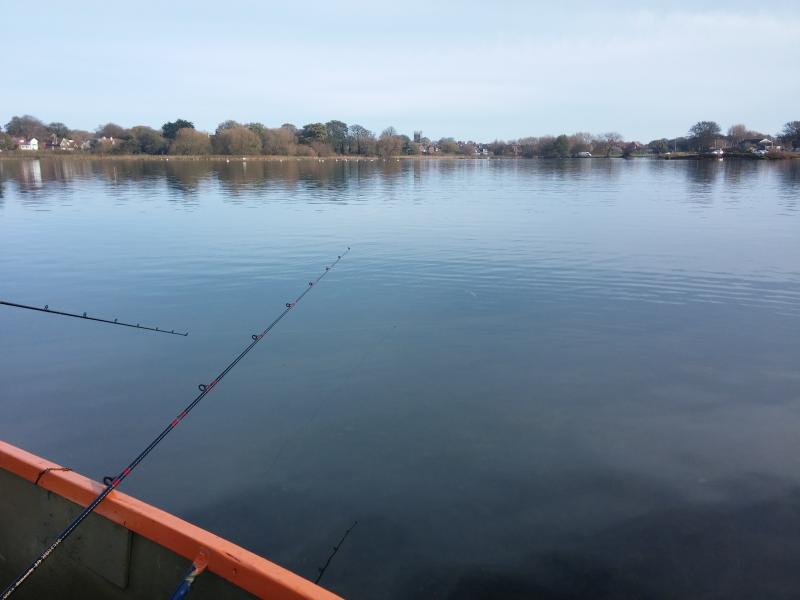 Most blog posts have a tempo to them. Mine almost always end up (unintentionally I hasten to add) like Stairway to Heaven. Slow build, uncertainty, build to crescendo,try hold that crescendo on an extended plateau if possible,  then tail off, wipe your member on the velvet curtains and go to sleep. So here we are at that upswing, that crescendo. Off we motored again, or rather hummed our way out to a series of buoys out in the middle and drifted again. Action stations! I saw a pike follow my big silver spoon all the way in to the boat then turn. A few casts later Bang! Fish on!  Aaargh! Fish off! Recast. Retrieve. Recast. Retrieve. Bang! Fish on! Lots of lovely bronze flashes under the water then we get the diminutive but very welcome jack pike into our boat. 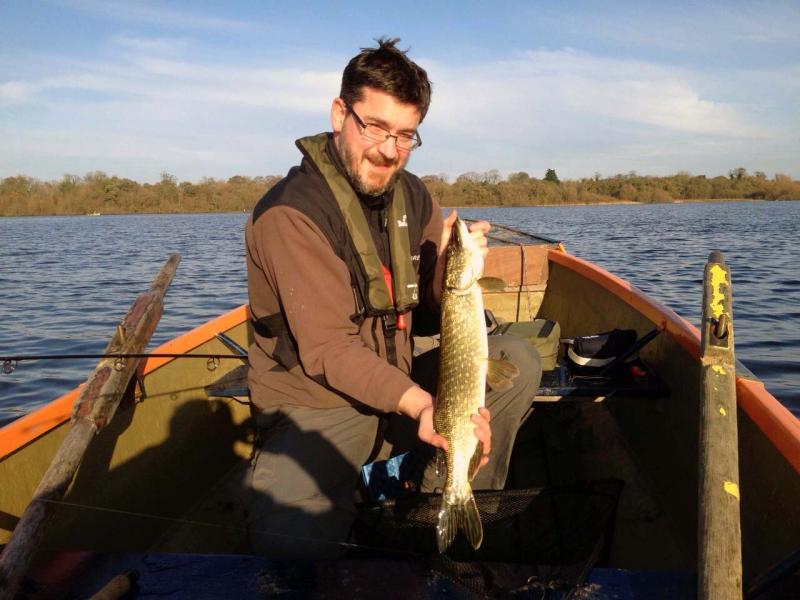 With the pike safely back in the water I carried on. Another follow! Another offer. Then the sport dried up. (Here we go, beginning tail off now). We came around and back through through the same drift to no avail so moved further towards the Southern shore where there was lots of bird activity, maybe a good sign? I noticed the water was still pretty deep and clear of weed so felt confident fishing a deep diving 19cm ‘Dirty Roach’ in a lip skull. Man those things look good, I’ve yet to catch on a soft bait though. Just as I was getting my hopes up again I spotted the boat man motoring out to us in his Whitby Whaler which I knew was going to culminate in a ‘time to come in lads’. To be fair, the sun was disappearing behind the trees and not much light was left in the day. 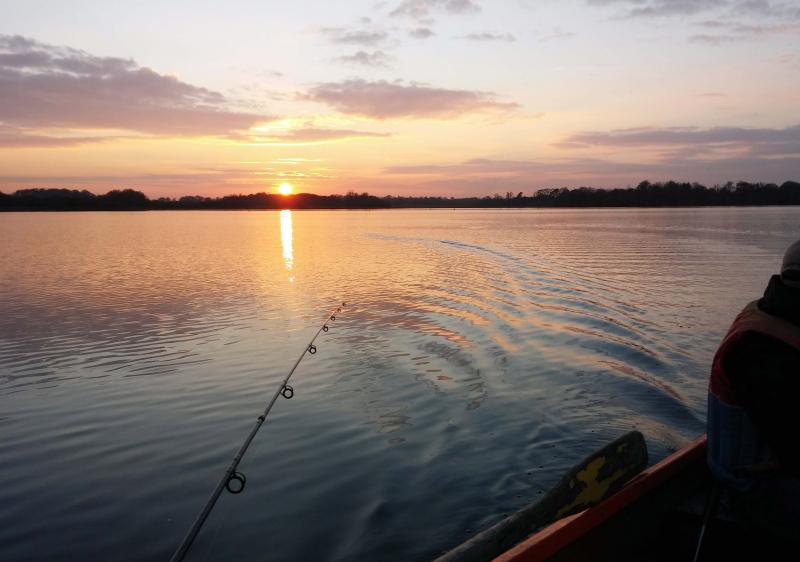 Great place, we’ll definitely be going back at some point. Hornsea Mere has a reputation for being difficult (its glory days long gone) but it’s a surprisingly attractive place with lots of potential. Friendly staff, quality bacon sarnie, and cheap as chips compared to equally daunting pike waters such as Esthwaite or Pitsford.