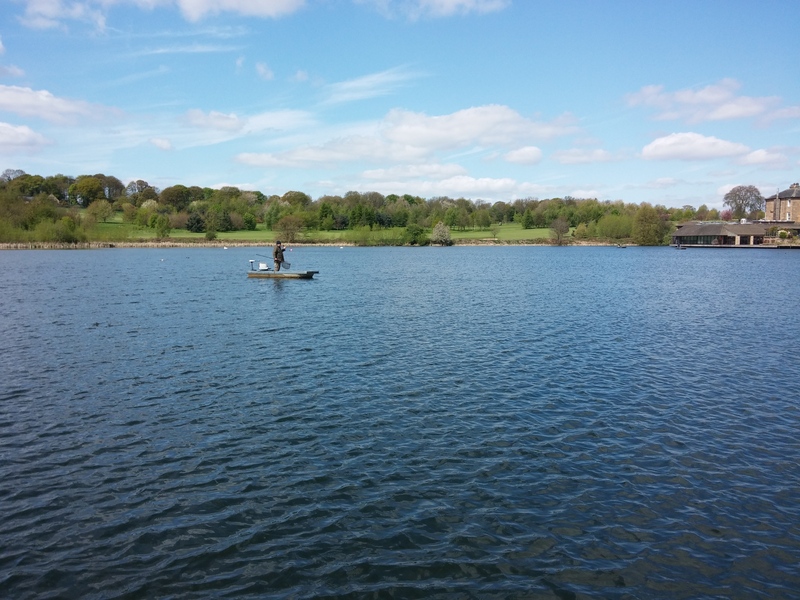 Ever since Stu splashed out on some pike fly-fishing gear he’s been desperate to go use it. To be fair, I was itching for some pike fly fishing action as well so when he suggested a return to Walton Hall I was well up for it. The presence of pike has actually been the biggest selling point of this venue for me, a fact which probably brings on an attack of the vapours for dedicated trout anglers. Time to open your mind, dude. Look at this mean little bugger I caught back in 2008 at Walton Hall. Pike are awesome! How can you not enjoy catching that?! On the fly! 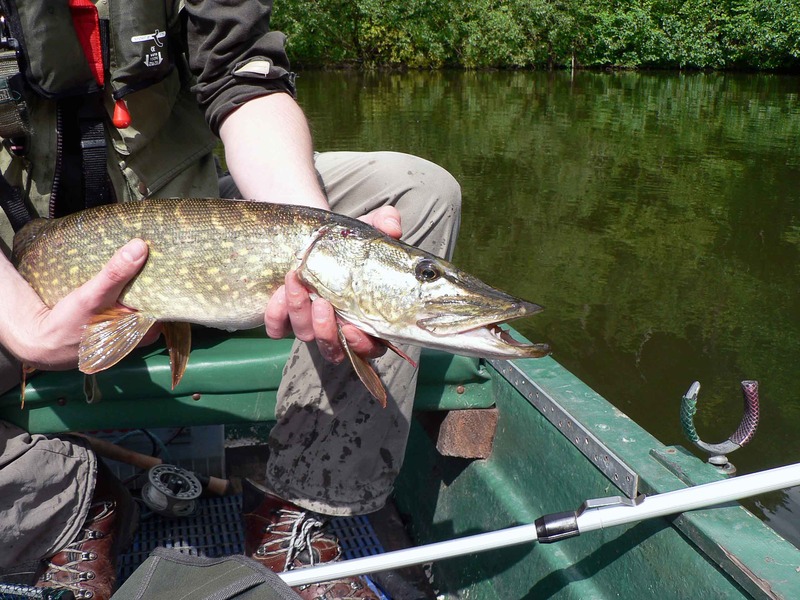 Stu’s enthusiasm for an early start did not quite materialise into reality but we were on the road in the Vectra of Truth (his purpose-bought fishing vehicle) for about 08:30 which is still good for us. It always feels weird to be heading to Wakefield to go fishing, I’m so used to heading up to N.Yorks/Lakes/Scotland or at a pinch to the Midlands. Upon arrival we called into the fishing hut and got a warm welcome with plenty of info about the best areas to fish. We were honest about our intentions to have a bash at the pike with the fly and explained that we had unhooking mats, tools, traces etc so it was agreed we were ok to do so. Ring ahead if you are wanting to fly fish for pike because remember this is primarily a trout fishing venue.

Because the lake was really busy we ended up taking the wheely-boat out albeit with the obvious understanding we’d bring it straight back if it was needed by a less-able angler. It took us a while to actually get out fishing, in fact I swear it took us nearly 45 minutes to tackle up but I did at least manage to speak to a fellow angler in the car park who recognised me from the website. Good to hear that the stuff I bang up comes in useful sometimes 🙂

Our first session was in front of the sunken boat where we were advised there was a deep channel. The water clarity was outstanding (especially with my polaroids on) and I could see plenty of fish chasing my huge pearly-silver pike lure but they all seemed to be trout. However a couple of times something bigger slunk in to have a look and I’m sure they were pike. The first offer came to Stu when his pike fly got snagged in an overhead phone line (!) then dropped into the water with a splash. A small jack grabbed hold before letting go again. 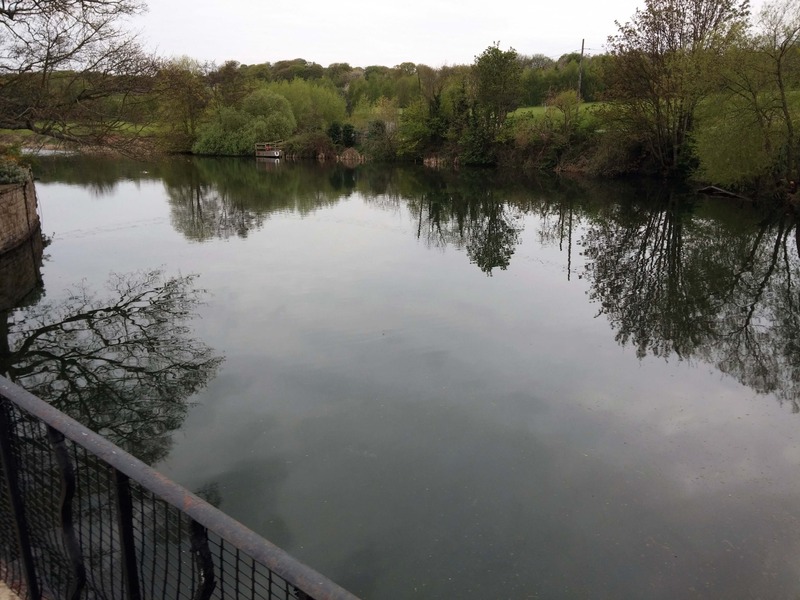 More trout follows..err..followed.. then another pike swam around inspecting our pike flies before sauntering off in disgust. We upped anchor and fished tight into the sunken boat – too tight in fact as I managed to hook a submerged plank! That corner was now ruined so we left there entirely and went over to the South East bay. We were however waylaid by a spectacular rise of trout in the middle of the lake, an opportunity too good to miss so out came the trout rods. I had a size 12 ish buzzer with orange goose biot cheeks and peacock herl thorax on the point and a red buzzer on dropper. Not a touch to the red but the one on point started doing the business. During a brief session I had several fish, most of them browns whereas Stu had all rainbows. One of Stu’s fish was a brute of about 4 1/2  – 5lbs which fought like stink 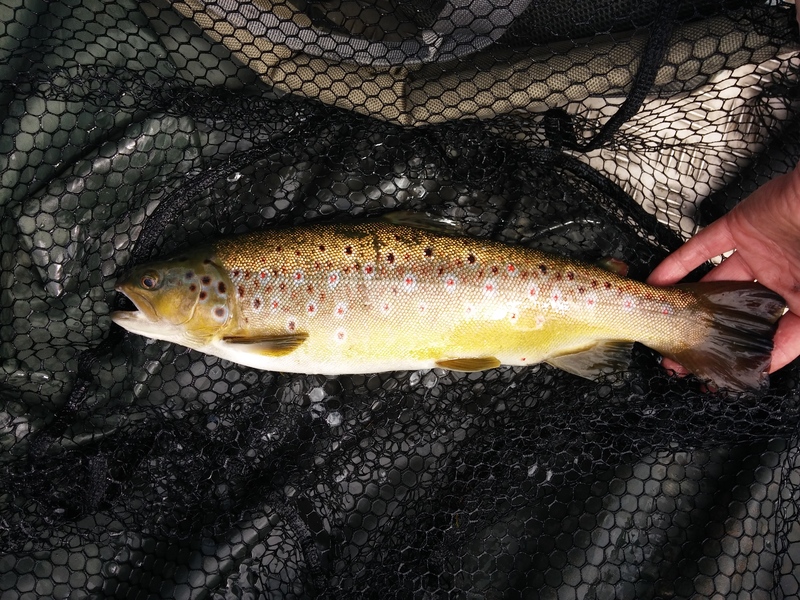 I eventually managed to drag us away from the still-feeding trout and onto the original plan, to fish the bay for pike. We anchored up and began hoying out pike flies. Shortly after I began seeing pike in the water. They weren’t double figure monsters but nor were they jacks, they were big enough to get me excited. With my Dame Edna shades I could see everything and began dropping my flies in front of them. I mean right in front of them, to the point of being nervous of foul-hooking but they would not take. My God it was exciting though! I tried and tried and tried but got zero interest. Of note, towards the end of the session I watched 3 pike get into a stern-chase which did make me wonder if they were still in spawning mode, and there I had a great new excuse for why I hadn’t caught a pike! 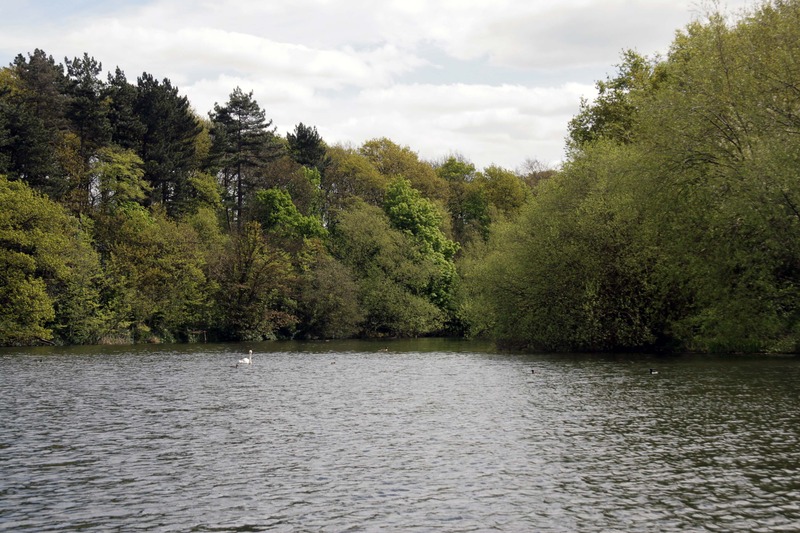 We came back out of the bay and onto the main lake again to have a bash at the trout which were still rising all over the place. A few more were caught, I had another couple of browns and some rainbows while Stu still caught only rainbows. Strange!

We headed back to ‘sunken-boat-swim and had another session after the pike but nothing was doing. The pike simply wouldn’t play ball. The most entertaining event was Stu realising he’d knocked his vaping nicotine crack-pipe into the lake. He literally tore the boat to shreds looking for it and was nearly crying with rage. It was funny for quite some time but then he started to get dark and wanted to throw my bag in the water which wasn’t funny. 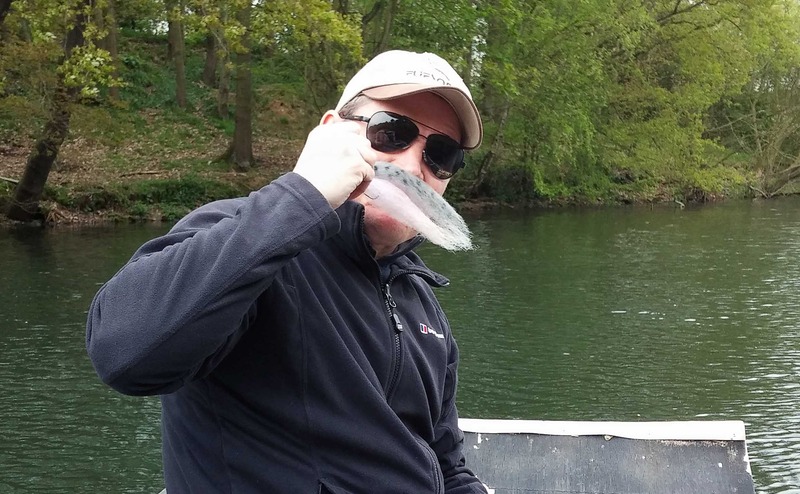 What was needed was some fish catching therapy so we went back out onto the main lake and had a last session after the trout. I was really enjoying buzzer fishing, some of the takes were incredible with the line being wrenched out of my hands. It was a much needed reminder of how effective the technique is because I’ve got into a frame of mind where I struggle to find the patience to fish this way. This was classic buzzer fishing though where you let the line swing round in a fairly gentle breeze into fish cruising upwind and need a steady retrieve to keep up with the slack. Static buzzer fishing in a dead calm is something else and requires immense patience or ketamine, or maybe both. I’m not quite sure I’m ready for static buzzers again. Mind you I’m off to Carsington this weekend and I reckon it will be the method. Anyway towards the end of this session something nailed my by-now raggedy ass buzzer. It went on a spectacular run. All my slack line was taken up and bang we were onto the reel. It even took line off the reel. It took all my line off the reel. Onto the backing! Yeaah I’m liking that. But wait. It’s taking all my backing and I can’t stop it. Fuuuck this has never happened to me before, I’m gonna run out of backing! This was the most spectacular fish I’ve ever hooked in over 20 years of fishing. It slowed, then surfaced – ooh that looks big. Ping. It’s off. Ugh. Uuugh! Reel in, try not to cry. Move on.

If only I’d filmed it! I have subsequently bought a Go-Pro knock-off that I can wear on my bonce for future fishing expeditions  – that’s how much it affected me! Half an hour later Stu hooked a nice fish and I filmed it on my phone but it didn’t fill the void. Still a good fight though.

We were still catching fish when the manager eventually waved a white flag (!) at us which I cleverly guessed was a subtle hint for us to pack it in and return to base!

What a cracking day’s fishing. This is the first time I’ve really seen the trout fishing light up at Walton Hall and it was brilliant. The fish fought like mad and that beast I hooked really was the one that got away. I thoroughly recommend you give it a go here, especially whilst it’s still fairly early season. You can find more info on Walton Hall here http://www.flyonlyonline.co.uk/waltonhalltroutfishery.html

3 thoughts on “Return to Walton Hall”