Ok you can probably guess where I’m going with that title!

Last weekend I attended an event at Chew Valley Lake organised by the PFFA (Pike Fly Fishing Association) after having being persuaded to join the club by Stu <didn’t take much persuading seeing as the membership fee is only £10>. I haven’t been fishing since the middle of Feb so was well up for the mission. It’s a long old drive down to Chew, you’re basically just outside Bristol which is over 200 miles from Leeds. Quite a few members went down and stayed in the same pub but as we were late booking we ended up in a different establishment called the Stoke Inn which seems to be well known to the PFFA guys. I imagine it’s a place that could divide opinion and to be honest the rooms are pricey but we enjoyed our stay there, the staff and customers were extremely friendly and the attached curry house was spot on.

We kept our heads down Friday night and only had 3 pints so as to facilitate an early start in the morning. We even skipped breakfast but although we got to the lodge for 8am we didn’t get out on the water until after 9am – sorting the boats out seemed to take a significant amount of time! There was also some initial confusion when I though the £80 I was handing over was for both days’ fishing, I forget how expensive reservoir fishing is! Looking out onto the water did get me excited though, the conditions seemed promising and we knew there are monsters in the lake such as the 40lb pike caught on the fly earlier that week! 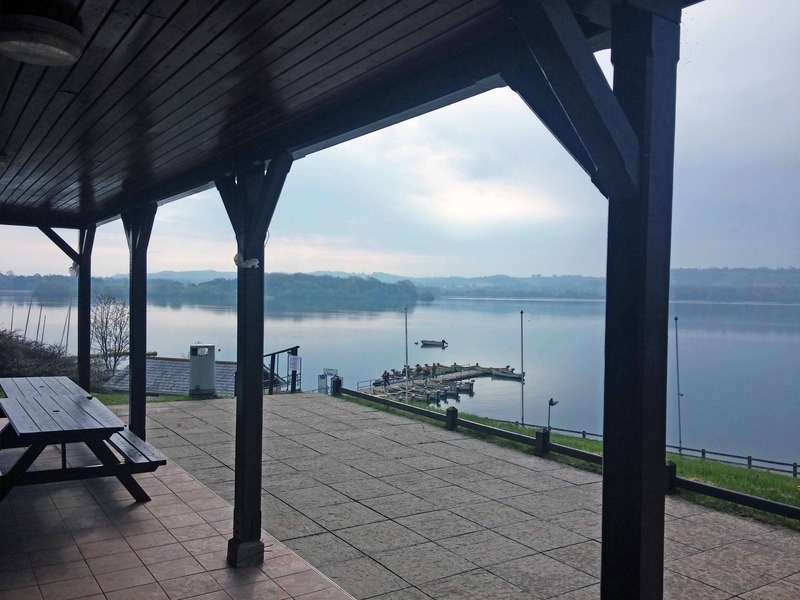 I’d tackled up my solitary pike fly rod, a Guideline LPXe 9′ #9 which I’ve had for years and always used with 9 weight lines. This time though I’d put a 10 weight John Norris P3 Big Fly twin colour intermediate through it which seemed to work a lot better than the 9. I can feel the rod working better especially on the double haul and will definitely invest in some more of these lines which only cost £12.99 – bargain! Stu had 3 rods tackled up, a fast sink #8, a big heavy #10 and a #9 intermediate so the boat bristled with armament and we headed over to a bay behind the island (Spring Bay?) which looked like something you’d see on Rex Hunt fishing when he’s pulling weird bog-eyed fish out of a mangrove swamp. It didn’t feel right though, too shallow and stagnant although the mouth looked promising. Mmmm, promising mouth. 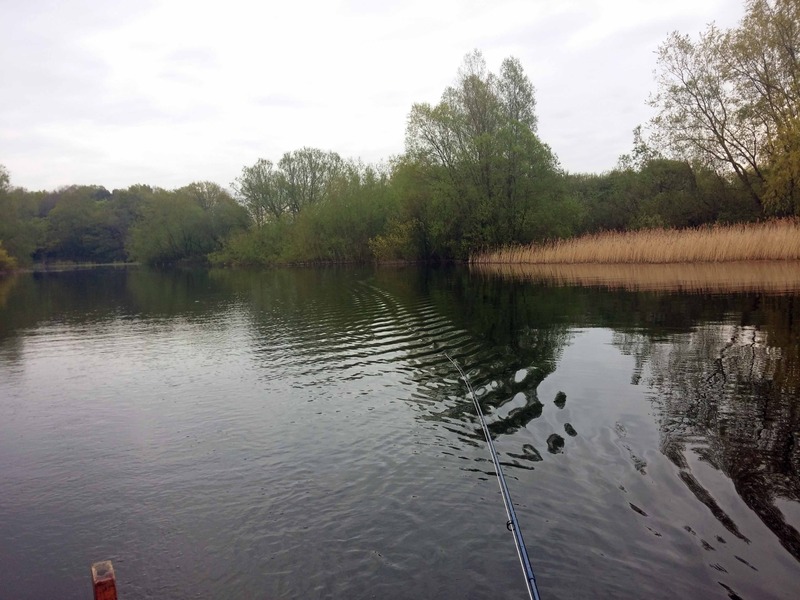 The bay behind the island

The mouth did not deliver either so we upped anchor and motored over to Villice Bay which felt a lot better. Here we both got some interest be it follows or knocks but nothing converted into a proper connection despite several drifts with the drogue out so off we went again, this time to Herons Green Bay. We initially ran drifts along the main part of the bay where again we got some interest without a solid hit before moving into the smaller dog-leg section of the bay. Here I finally got lucky as my Rainbow Pink Roach fly I’d tied up specifically for this mission got absolutely smacked (as River Piker would say). The fish gave some good hard runs before treating us to a Polaris launch out of Chew with gills flared – awesome. It was only about 5 1/2 pounds but as always very welcome to the net and handsomely marked. 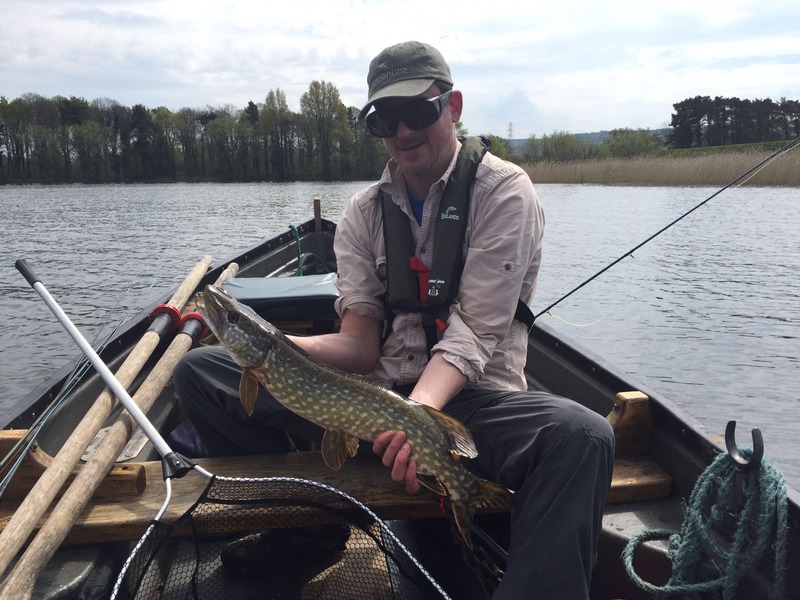 We fished on until the glorious weather turned to shit as a storm rolled in bringing thunder and lightning. There’s nothing clever or macho about waving a carbon fibre rod around in a storm so we put them down and laid into our provisions until it passed over.

As is always the case the pictures never really do it justice but it was amazing how the weather could deteriorate so rapidly from calm, sunny, no wind to crazy storm and back again in such a short period. 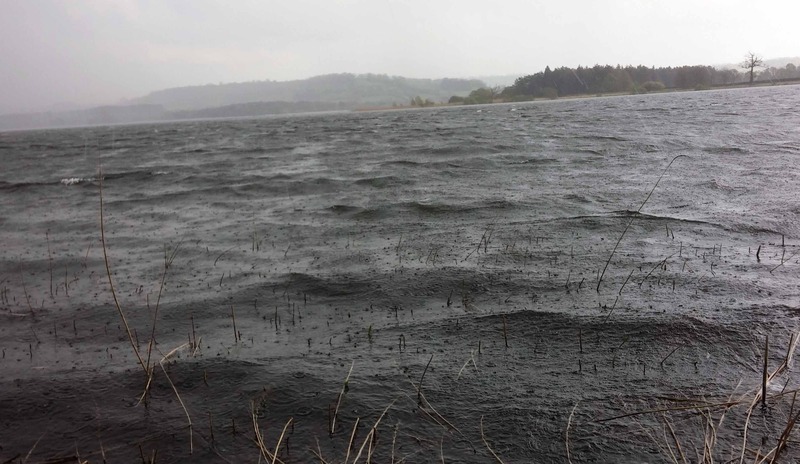 No more success was had in the bays so for our last session of the day we anchored up in one of the deeper parts of Chew near the lodge and trawled the depths with our fast sinkers, and hit nothing there either. There weren’t too many anglers left out by the time we came back in, it was a long day for one (jack) pike. 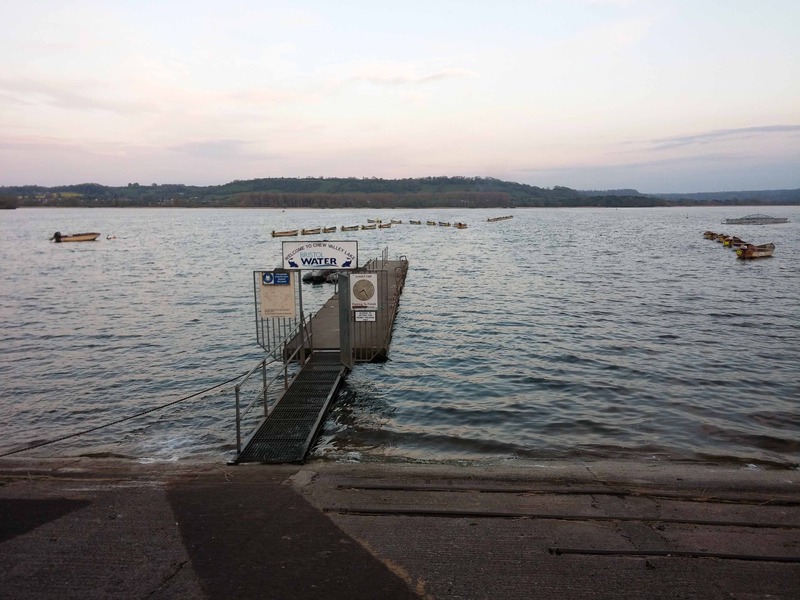 We did at least manage to successfully procure a few pints back at the Stoke Inn and great curry from the attached Indian Restaurant/Takeaway!

A more leisurely start this time but we still managed to get on the water for not long after 9. Plenty of sunshine but with intermittent cloud cover, a bit of a breeze, this could be a good day. We start off by drifting past the jetties where we were told we could expect to ‘bag up’ on jacks but despite dropping our flies right next to the  supports and just under boats we didn’t have a single take. We also drifted near the cages where again you’d think the detritus on the bottom would attract small fish and therefore pull in pike but nothing. Back to the bays! We hit Villice again and contacted fish along the reeds but nothing stayed on. A return visit to Heron Green Bay was less successful than the day before although Stu had some exciting but frustrating follows and a potentially double figure pike entered from stage right to lazily swim up to ‘see my fly off’ as someone later described such behaviour. 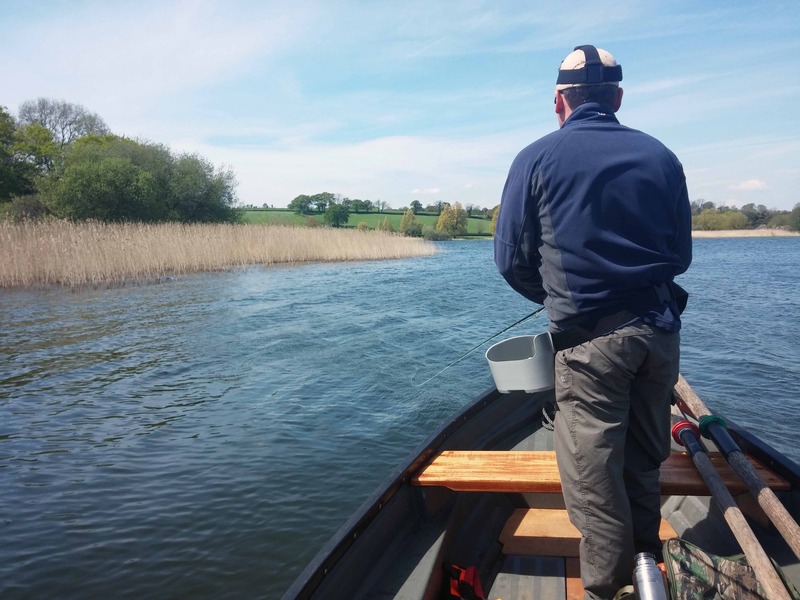 This was the most productive part of the day, Stu kept getting offers to a fly with some green in it and even managed to hook one momentarily but frustratingly it wouldn’t stay on. The takes dried up on this side of the island so we motored round t’other side but the wind was now a total pisstake so it was back into the bays for the final session of the day, sadly unproductive. Actually, I tell a lie, the most productive part of the day was slamming into our packed lunches prepared by the Stoke Inn. Our surprise sandwiches consisted of thick hanks of ham in bread and butter wi’ nowt else but oh my word they were fabulous! The plain Pringles… not so much.

So, 2 anglers do a 450 mile round trip, spend £180 on accommodation, £60 on fuel, £160 on boats/permits, probably another £100 on beer, food, curry etc .For their £500 these 2 anglers were rewarded with one jack pike. As we came off the water we were both of the opinion we probably wouldn’t do Chew again as it’s such a big mission and besides, you’re going the wrong bloody way, if you’re on a motorway you should be going up North to Scotland. And yet…like the Fellsman…the painful memories quickly dissipate leaving behind the rose-tinted stuff and already I’m thinking I’ll probably end up back there. Hopefully we can spend a bit more time with the rest of the PFF anglers next time and tap them up for desperately needed knowledge although I think most people struggled this weekend. Finally I leave you with the gritty, unedited reality of 2 over-excited pike fly anglers catching a small fish. This video has been classified as an 18 which means it may contain sexual swear words and fish fumbling.