To the casual observer it may seem as if I’ve done sod all fishing recently bit this simply isn’t the case. I am however struggling to find time to write the blog. But here, now, chores done, packed lunch made, I can finally sit down and knock one out. What are you laughing at? How dare you. Anyway. Last August I had a burning desire to return to Gairloch to deal with some unfinished business involving Munros and hill lochs. This August it already felt like a new routine was underway, time to plan the August solo again and this time I had one key objective which was to at least be near Suilven to see and feel its magnificence and the rest was simply climb a hill and catch some fish.

A bit of map scouring resulted in a plan to walk up to Lochan T**th and fish for wild brownies but also climb up Sgurr an Fhidhleir (also known as ‘The Fiddler’.) and maybe out onto Ben Mor Coigach. I was taking a different route to the usual path up ‘The Fiddler’

A good nine hour drive brought me to Altandhu campsite near Achiltibui. it’s a bit of a mission to get there because even when you’ve turned off after Ullapool you still have to drive all the way out along and round the end of the peninsular. I hotfooted it up to the Am Fuaran pub to pay my site fees and fire down a swift pint before getting back to pitch my tent and (seeing as I’d missed food) cook some super noodles up. It was then simply a case of necking some beer whilst reading Winston Churchill’s biography and listening to the waves lapping against the beach! Altandhu is a nice little campsite, everyone was friendly and even the sheep were keen to say hello.

Morning spawned some significant admin as I kicked the sheep out of my tent and packed my big rucksack for camping, hillwalking, photography and fishing whilst also preparing breakfast. I then had to drive all the way back around and along the peninsular to the end of Loch Lurgainn and beyond where I found a parking spot just past the bend. It’s always a worry leaving your car overnight but if you can’t leave it here then where the hell can you? I set of in beautiful weather, the sun was shining, blue sky, the works and as I began gaining height I got some nice views of that Assynt icon Stac Pollaidh with still in bloom heather in the foreground (a benefit of being up this late in Summer)

I’ve done a fair bit of pretty intensive walking/trail running this year so I was actually in the mood to take this one nice and steady without killing myself and besides I wasn’t gonna break any records carrying a 65L pack. Eventually I got up on the ‘plateau’ and got my first view of the ‘Fiddler’ and it invoked one of those ‘Oh yes!’ moments.

I quickly got to work pitching my tent (Zephyros 2XL) and getting everything sorted for evening time before heading out to climb up the Fiddler. It’s a good steep pull up the ‘gully’ and I had to pause for a couple of breathers but there were no tricky bits (other than trying to keep sight of the ‘path’, I think there are several) and once you crest onto the the plateau between the Fiddler and Ben Mor Coigach it’s an obvious plod up the boulders to the summit of the Fiddler. On the way I met a tame (or maybe unwell?) ptarmigan which I got some pretty close up shots of despite not having much of a zoom lens with me.

Onto the summit views. I think it’s generally acknowledged that the views from the Fiddler (and Ben More Coigach) are ranked amongst the finest in Britain and all the way up to the top I could barely contain my excitement at the thought of seeing that great expanse of Assynt wilderness with its magnificent mountains. The glimpses just back down to where I’d come from were already amazing!

Naturally, just as I reached the summit cairn the clouds rolled in and dicked it all up so Suilven and co. are bathed in low cloud. I can’t complain, I’m normally pretty lucky with summit views and I’ve seen Suilven from pretty much every other angle on numerous occasions! You get the scene though, you know that on a clear day that view is going to be etched onto your brain and stay there long after most other shit has disappeared into the fog of old age etc.

I hung around a few minutes waiting and waiting but the clouds were scudding in constantly so I decided to get my ass back to T**th and wet a line rather than walking up onto Ben More Coigach – that looks like an amazing ridge walk to be saved for another day that should deliver fantastic views out to sea.

Upon my return to the lochan the wind had dropped and the midges were out. Didn’t seem too bad initially but enough to force deployment of midge net and Smidge. I worked the Southern shore with a couple of standard wet flies (M&C on point I think, with Bob’s Bob Fly on dropper) and eventually hooked and landed a nice little brownie. As always I couldn’t help but be amazed at the markings. He went back, as did the 4 or five others I landed during what turned into quite a rise.

It was a rise I had to eventually abandon though, as the midges just got out of control despite my best efforts to deter them. It is of note that the takes were very subtle. I’m normally up in Assynt in June and the takes that early in the season are hard snatches that can yank the line out of your hands. Not these though, most were ‘Was that a fish? Oh, yes it was!”. The takes were the same last August in Gairloch and just a week ago when I was back up in Assynt – again! I can only assume they’re not quite as starving as early season when the lochs are only just warming up and the fish are starving. Who knows…I’d be interested to hear if other anglers have experienced similar.

I still had to cook my tea which was a trial all of its own. I fired up my stove and waited for the water to boil and ran myself around in circles at a speed greater than 5.5 mph but every time I  returned my water was collecting solid black lumps of congealed dead midges. I tried to fish them out but gave up and just slid my pack of supernoodles and stirred the whole lot in with a slight shudder.

Once it was cooked I literally dived into my tent with my food and zipped up inside to eat. I hate noisy eating but I was alone and starving and must have sounded like someone trying to vigorously retrieve a wellington out of a syrupy bog. Then I whipped out some more Churchill, cracked open my fun sized wine bottle and began to soak up the silence. Once the wine was gone, out came the hip flask and I soaked up even more silence. Eventually I put down the book and drifted through the usual ‘fuck I’m up here all alone in the middle of nowhere’ period into ‘ahhhh this..is…amazing’ mode.

Morning was a cracker in terms of weather but once again conducive to midge madness. I fished for maybe 45 minutes and the had to pack my stuff away and get gone. It’s not easy leaving a scene like this :-(. 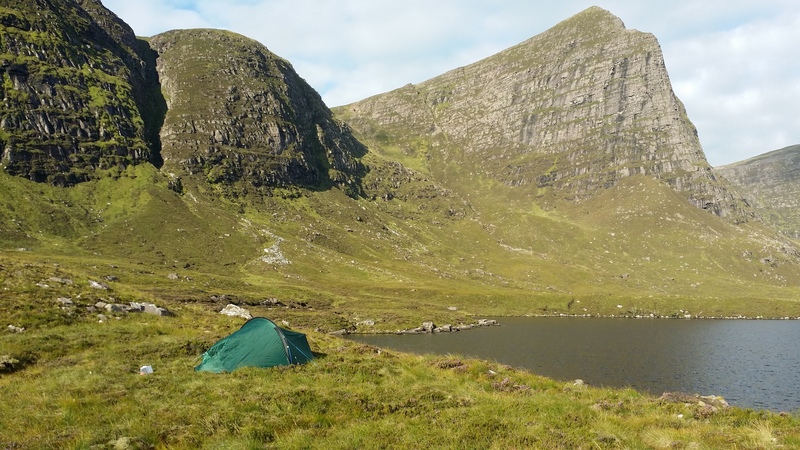 I made my way down to the car which was thankfully still there and drove back to the Atandhu campsite where I had left my other tent up, stopping to take in the amazing views back over to Stac Polly – you definitely get a unique view from the Achiltibui side.

Ah one more thing, this was the inaugural outing for my Sawyer mini filter. What a brilliant bit of kit! It weights bugger all and enables you to drink from streams and lochs with confidence. Many of you would not hesitate to drink straight from such sources but equally many of us still worry about the dead sheep/massive human shit lurking just up stream. I will always have one with me now for wild camping missions.