This weekend I was mostly supposed to be bobbing around on the North Sea catching ling, cod and scurvy on a boys weekend in Whitby. Instead I was holed up in Leeds with an industrial strength cold feeling sorry for myself, resorting to sorting my fly boxes out and steaming my flies. 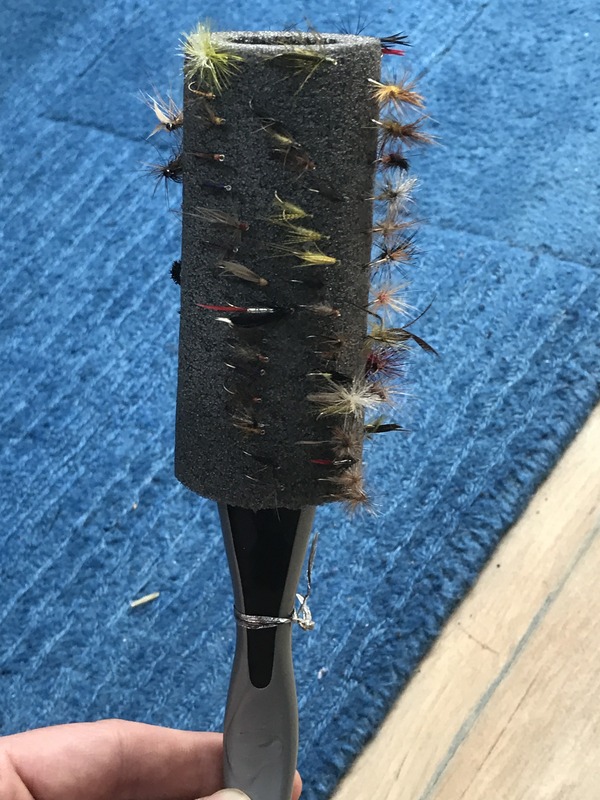 However, by Sunday evening I felt well enough to go hit the river for a couple of hours so headed out to my club stretch of the Wharfe. The weather was delightful although the often cloudless sky probably wasn’t so good for fishing and the water was very low.

As is now often the case, things didn’t quite go to plan. I started fishing a great bit of water that I’ve only fished once before and felt confident I was in for a good night when I felt a tug at my feet. Assuming I was snagged up in something I yanked my foot only to see my felt sole come floating up to the surface. Sigh. I persevered but then became unhappy with how the tip of my fly line was sinking so waded (gingerly) to the bank and swapped out to my other reel hoping a #5 line would be ok through my #4 weight rod. Whilst doing this a fine little Yellow May Dun came to say hello.

I also moved away from upstream wet to down and across which most frown upon now but sometimes you just gotta go with the flow! Ratatata tat straight into a cheeky little brown. Result! No more fish though so I moved upstream (discovering en route that my other felt sole had also delaminated itself into oblivion)  and fished a couple  more pools before settling on a lovely little run with a couple of active fish. I threw a tan Klink their way but it was completely ignored, then I remembered the Yellow May Dun and tied on a yellow Klink. A lovely cast, even if I do say so myself and gloop, the fly was taken by what looked like a decent sized fish but as I struck the fly pinged back to the bank . Curses! A second cast also got a take which again didn’t stay attached to the fish. A third cast resulted in a huge bow wave through the water as the fish decided it had had enough of my shit and zoomed off. By now it was dusk, and as I walked back to my car I put my foot straight down a rabbit hole as far as my knee but my body and upper thigh kept on going. Thankfully the anticipated CRACK didn’t happen, lucky escape!