And you run and you run to catch up with the sun but it’s sinking
Racing around to come up behind you again.
The sun is the same in a relative way but you’re older,
Shorter of breath and one day closer to death. 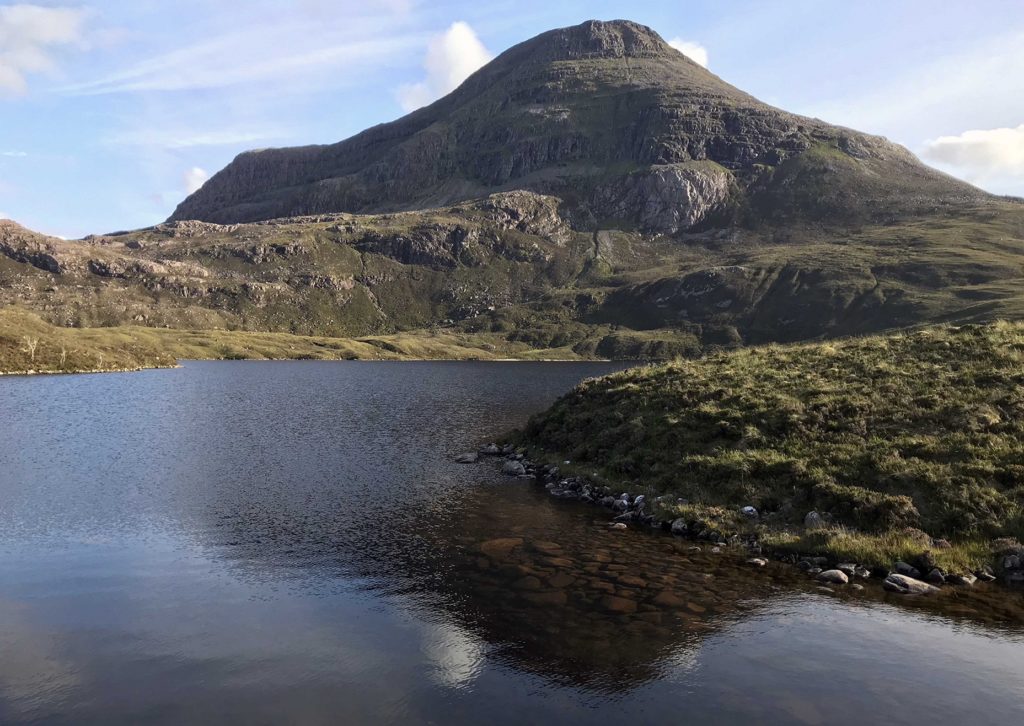 It’s good to find an excuse to shoehorn in a Pink Floyd lyric or two. What’s my excuse this time? Time, time of course! It’s the kind of thing that would be perfectly represented in a graph but I can’t be arsed  but in essence it seems as if the older you get the less time you have and now I’m quite heavily committed to being in my 40s the graph of time-fuckery is off the scale. It’s September and I haven’t even thought about making a serious start to the annual fishing holiday blog from mid June. The best I can muster is a quick write up on my by now customary August solo but that in itself was cut short by a combination of ill health and lack of time. 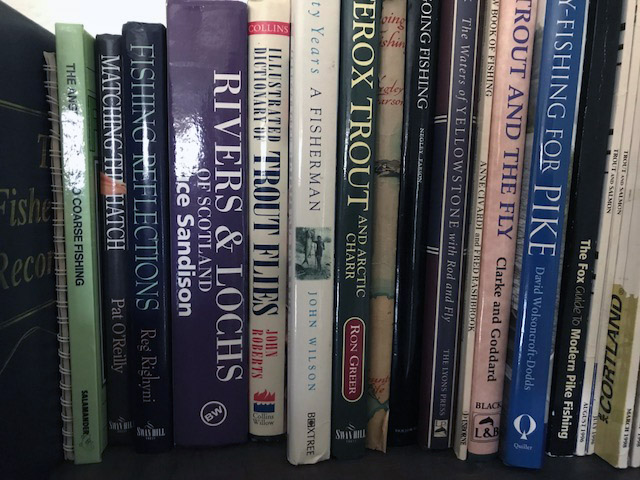 The destination had been decided a month before. A decent sized hill loch that could be reached from Glen Torridon which had a big hill behind, with additional lochs and lochans that were, according to Bruce, all worth a chuck. The endless pen in mouth, chin stroking contemplation whilst knee-deep in OS Explorer maps is half the fun of these things and what got spat out the other end was a damned good plan. I even made my wild camping intentions known to the estate in question in case there was stalking taking place that weekend. But then Work got in the way and my departure time got pushed back by a day which wasn’t ideal. There followed an unseasonable but stinking cold on the run up which finally convinced me on the Thursday night that I was not well enough to drive 8 and a half hours and should scale everything back to a couple of nights in the Lakes.

Having made the mental adjustment from Gairloch to Wasdale I was happy with the plan and just needed a campsite in the Lakes to operate from. Unfortunately this was the Bank Holiday and they were all full. At 10 am I came full circle and decided that fuck it, I was off to Gairloch after all. This was not a good time to decide upon such a decision! There followed some frantic preparation and packing which resulted in a 12:30 departure and as I sniffled, snotted and snorted my way up the M6/M74/M9/A9 I undulated between ‘yeah this will be good’  to ‘WHAT AM I DOING?!’ I must have gone through the entire Led Zep back catalogue in that Vectra during what ended up being a 9 and a half hour journey due to roadworks and general congestion. By the time I pulled into Big Sand campsite I was a wreck and was really starting to think I’d rather be at home but got on with the business of erecting base camp. By the time my tent was up, sleeping pit arranged, mountains of kit unpacked it was 11pm!! I sat back in my chair with a cold beer in a daze listening to the waves breaking on the beach down below. As if by some divine reward for idiotic perseverance the clouds lit up then drifted apart to reveal a full moon, which in turn painted the sea a brilliant white. You’ve heard me use it before but the Apollo mission analogy sums it all up rather nicely – a terrifying amount of admin, 9 and a half hours of driving, a fistful of petrol money all instantly become worth it for a memorable and “Rock solid. Heart Touching” moment like this (this was the motto used by Asus on its motherboards.Fuck knows why, it’s a pretty ludicrous thing to say about a motherboard but I’m redeploying it) 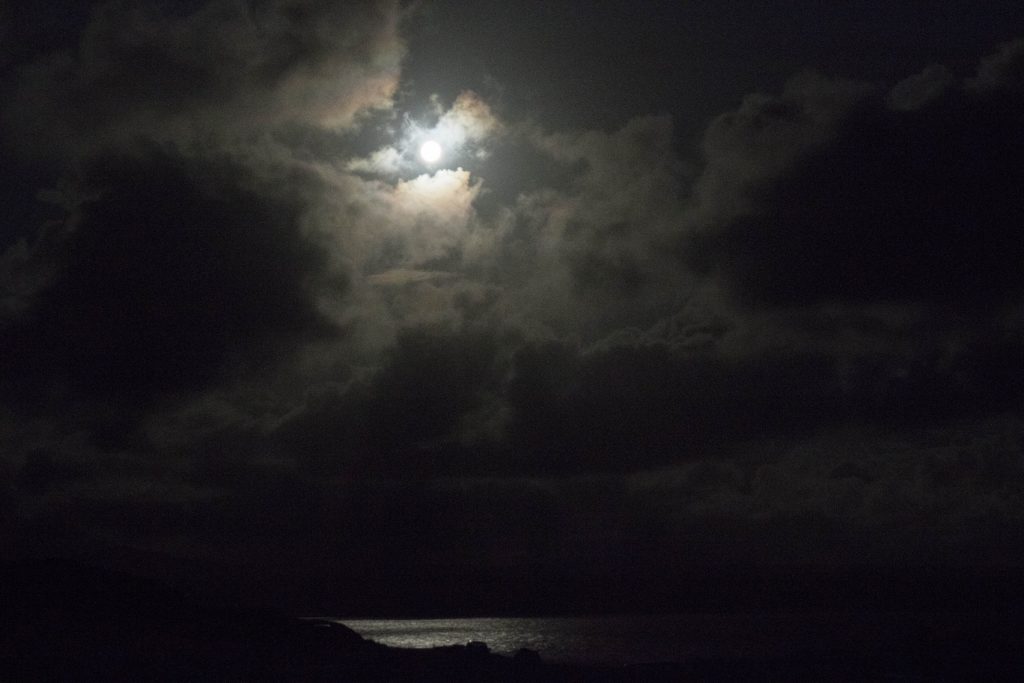 I must have had the best night’s sleep in ages – dead to the world, no need for the 1L wide mouth tent bottle of shame despite the couple of late night beers. I lol around in my doss bag for a while before crawling out of my pit to brew up. It’s just another lovely little camping moment, savouring a cup of tea and an instant porridge whilst looking out onto the grass and dunes of Big Sand. Whilst doing so I hear some scrittering and a’scrattering from the porch and discover what I assume is a long-nosed shrew, what with it looking very much like a shrew but with a long nose.

I then proceed to get my shit together for the day’s outing albeit at a leisurely pace. I shun the flask for once and pack my stove and all the associated brew kit. Next stop Gairloch for some freshly made sandwiches and some emergency beer for the evening before finally getting on the road for Glen Torridon. My car is old and a bit tired but still has a decent sized motor in it which can encourage some lead foot action on these roads but I kept reeling myself in when I remembered just how many deer there are around this part of the world which are prone to jump out even during the daytime.

This is not an overnighter so I am able to stick to a 30L pack. It is not an overnighter because I am still feeling a bit shit and the 3 and half mile pull up to my destination loch is taken at a very steady pace. I even keep stopping to admire the scenery and during one such pause realise I can see a loch we fished on last year’s annual fishing holiday. 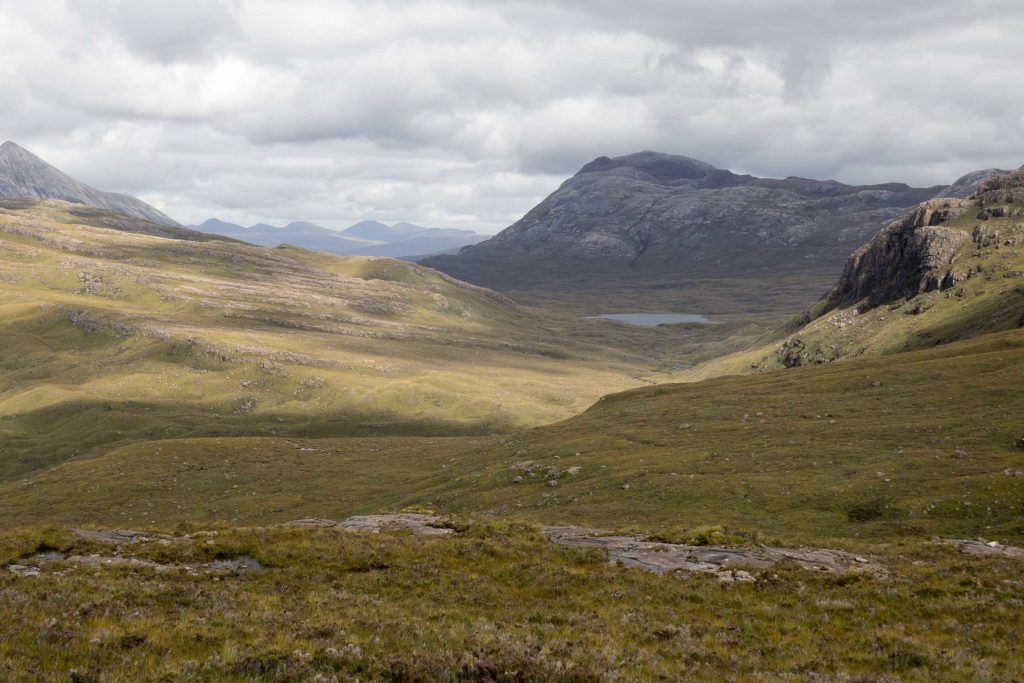 As I get near to my destination I pass two of the smaller lochans that I had on my radar to have a chuck in. One of them looks perfect but I resist the temptation because I had a plan and I should stick to it! The destination loch soon comes into view and my map perusing had paid off as it was clear I had found another stunning little setup. I briefly weigh up my options and wonder if I could walk round and get up the mountain but I dismiss such nonsense as it would leave me a) bollocksed and b) no time to fish 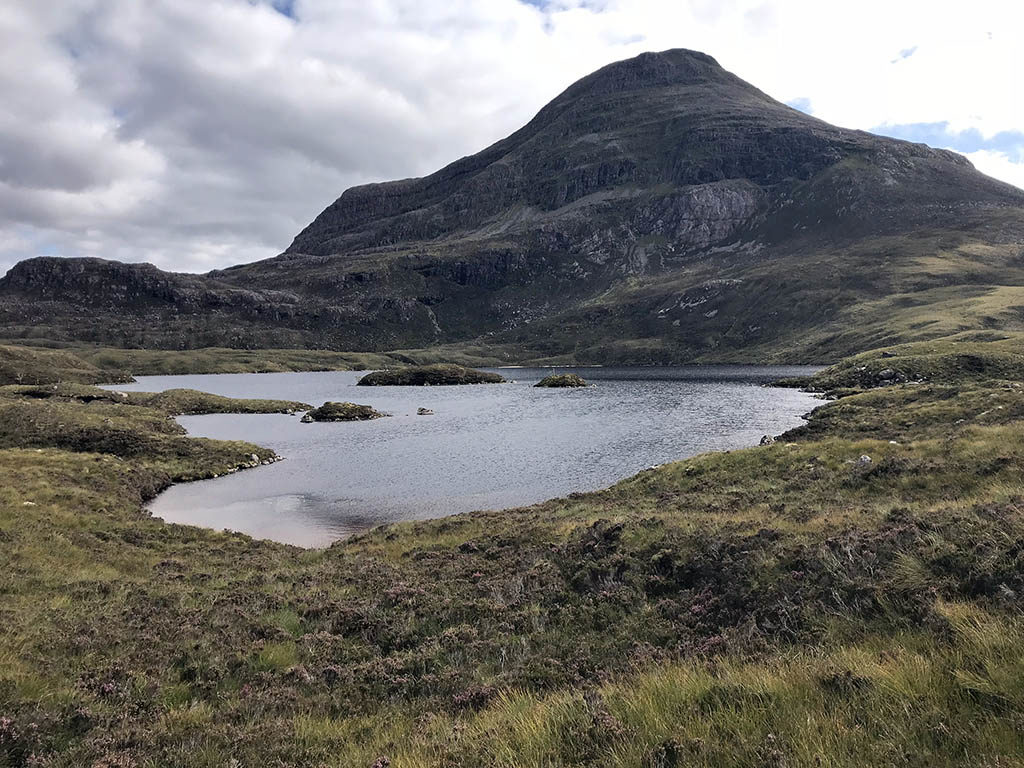 Brew time! Another moment that makes coming all this way worth it. Kicking back in the heather with a freshly made brew, a good ol’ packed lunch and letting that view just do its thing. 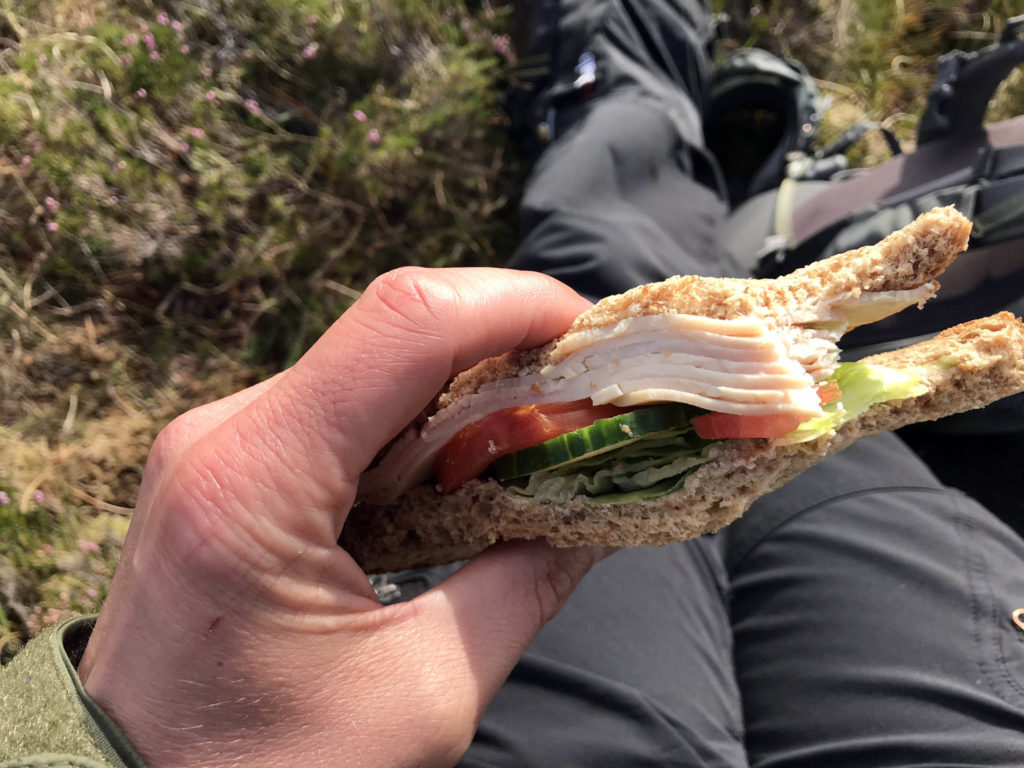 Gairloch McColl’s does not hold back on the turkey slices

I’m actually not bothered that I won’t be wild camping tonight but part of that must be down to the Welsh mission earlier this Summer. I put up my usual 9’6″  #6 with a Mallard & Claret on point and a Kate McLaren on the dropper and starting working some likely spots, including a point where I saw a substantial fish move. The wind is cold though, in fact the ambient air temp is pretty cold up here as well, prob about 12 or 13 degrees max. I am very thankful I packed my Keela Primaloft Belay smock which is a proper warm pull on snug fest and is also long enough for even my elongated torso. Frustratingly I cannot get a bite no matter what I try. After an hour or so of actual fishing I decide this loch is not going to switch on anytime soon and that I should head back to the tasty wee lochan I passed earlier.

This bit of water is a couple of hundred feet lower and consequently seems to be out of the wind and a bit warmer. It just feels right and reckon there’s a better chance of catching something here.

As I get to the water’s edge it does seem a bit shallow but there’s some plant life about 20 ft out which has gotta be where the fish are hanging out. Couple of casts and I think there’s a little tap. Out again and the line is firmly drawn away (again, these late summer fish seem much less aggressive than back in June/July). A good healthy scrap and I manage to bring another perfect little hill loch brownie to hand. He goes back like a (moist) rat up a drainpipe. 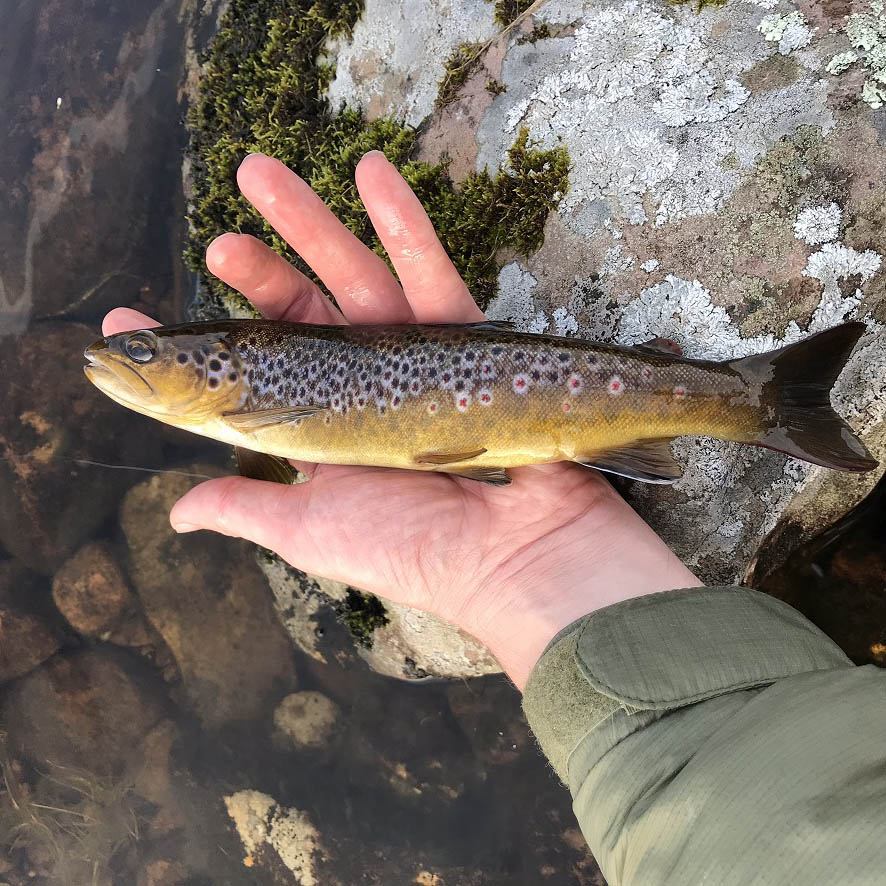 A fish on for another half an hour but I’m not bothered now, I’ve ticked the box and just want to admire the scenery – the Torridons make a fine backdrop! 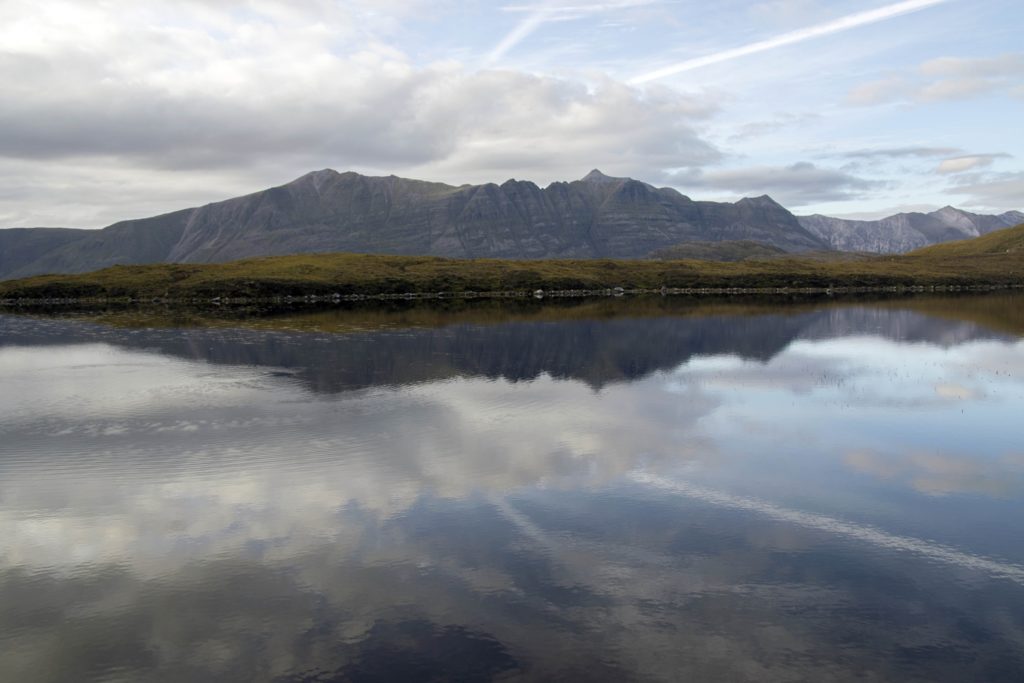 I take a steady walk down and what with the 45 minute drive back to the campsite it’s another very late night tea. This time it’s a tin of beans and sausages washed down with a couple of beers before bed, superb.

The original plan meant I could in theory come back Tuesday. I’d then revised that to come back Monday and have Tuesday to relax at home. But now, sitting under my porch eating porridge and drinking real filter coffee from my dual purpose cup/cafetiere as it relentlessly siled it down I realised that on this occasion it would be better to bite the bullet and drive home today. XCWeather, the BBC, MWIS all said it was non stop rain all day and night. Am I actually doing this? Nearly a thousand mile trip for 2 nights and one whole day in Gairloch? A mental image flashes up of me eating a bacon sandwich at the cafe in Tarvie, followed by me sitting in my lounge, in the warmth, feet up having another beer. Yes I am actually doing this.