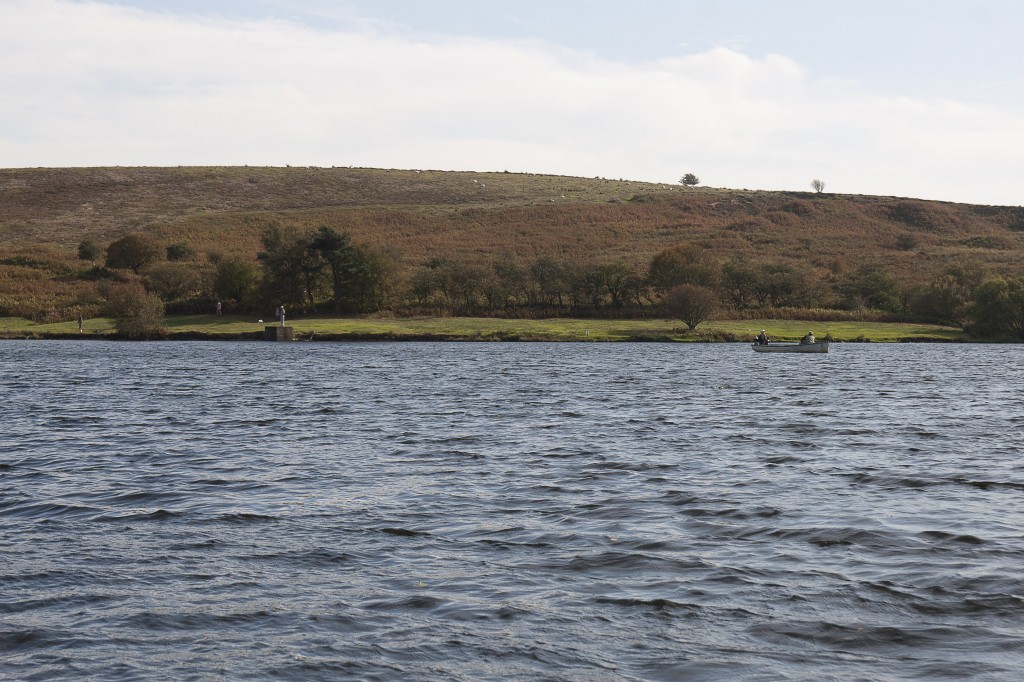 Now, on yorkshireflyfishing.org.uk, the phrase ‘we’ve been meaning to visit <insert name of fishery>’ has become a tired cliché. But really, what else can I say, we really have been meaning to visit Lockwood Beck for bloody years! I’ve also meaning meaning to update the main site for years – regular readers will notice that all we ever update is the blog nowadays. Well, here we go, the first new entry on the main site for about 2 years!!

Lockwood Beck is a 60 acre man made lake located just off the A171 on the edge of the North Yorkshire Moors, not far from Guisborough. For precise location see here http://www.lockwoodfishery.co.uk/findus/location-map.php. On arrival we were met by the fishery manager (I assume) who gave us the low down on how the place was fishing and what flies to use etc. He was pretty honest that not many were being caught that day but we knew that was to be expected in view of the unseasonal blazing sunshine and cloudless sky. We got to 2 x 3 fish tickets and a boat for a grand total of £40 which isn’t bad value nowadays. Catch and release was allowed after your first fish had been killed. Facilities include a coffee machine, weighing scales and a small selection of tackle/flytying materials in the lodge and a nice clean thunderbox!

We didn’t really have a clue where to start so headed along the Western bank past another boat that was anchored up, figuring they may be well informed locals. Rowing was not made easy by the stiff breeze blowing in off the sea, or indeed my burgeoning hangover and I suggest you bring your electric outboard if you have one! Eventually we too anchored up (glad to see Lockwood provide 2 anchors to stop boat spinning) and began fishing. 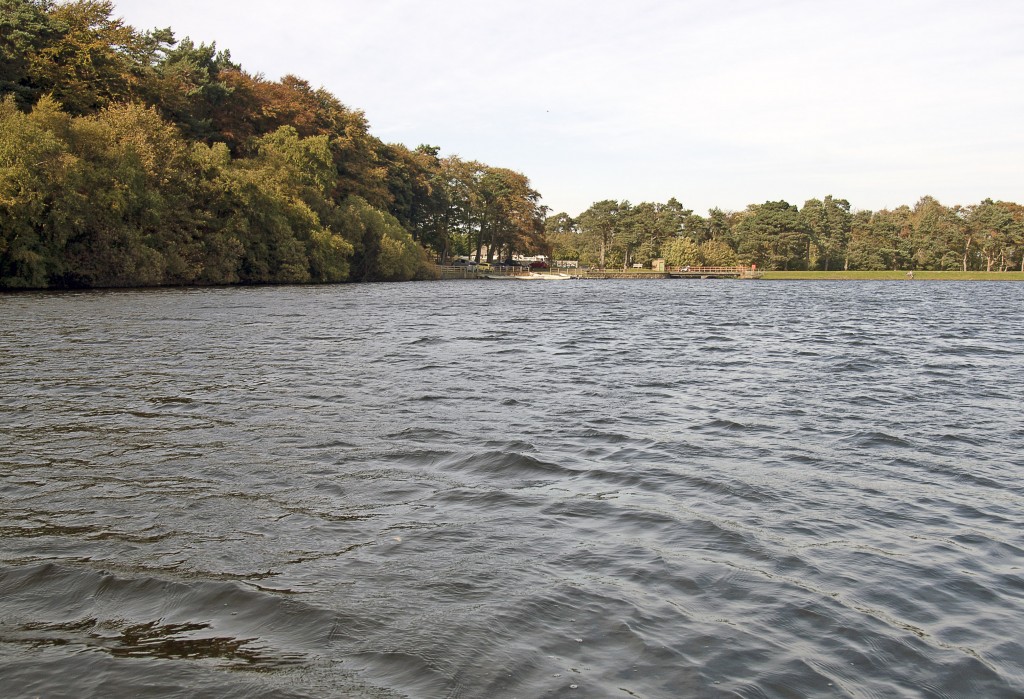 I had on a Mallard and Claret on point with a Zulu on the dropper whilst Stu fished a solitary Muddler to rip through the waves. An hour in this spot (yeah, too long, I know) resulted in only one offer, a slash at Stu’s Muddler. We upped anchors and rowed out to a more central part of the lake where I began plumbing the depths with my sinking line and a garish Damsel – never fails to get some interest! Alas, nothing. Observing a couple of anglers catching fish on the dam we once again moved position to bring us closer to the action and I fished my Damsel with renewed vigour. 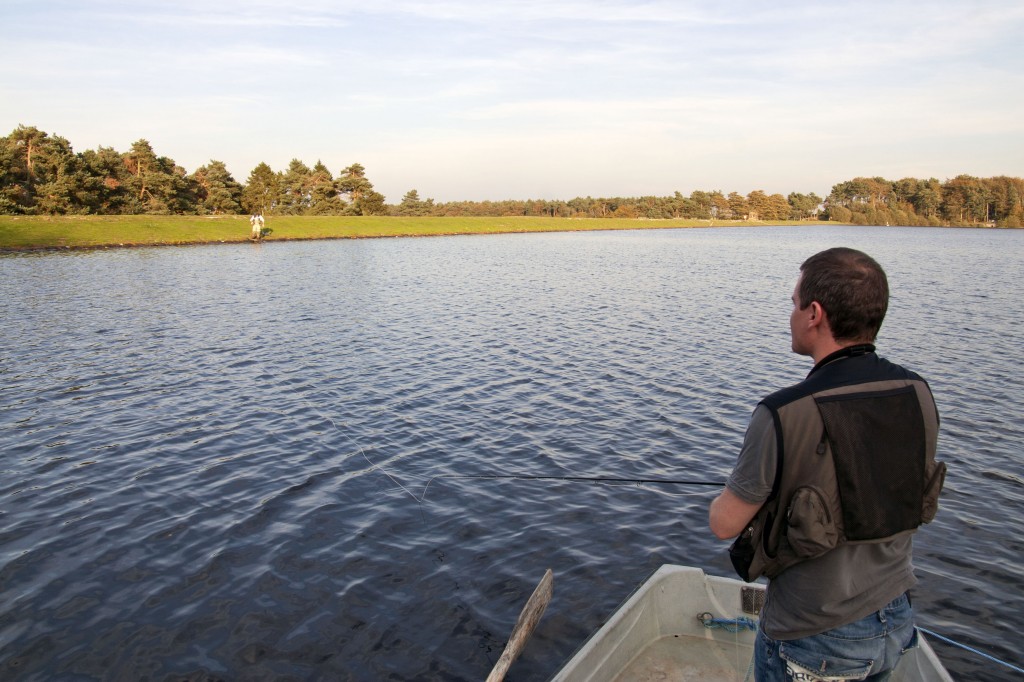 Not a bleedin’ thing! I began to get pissed off with everything now, nothing brings out the sulky child within an angler more than blanking whilst others are caning out fish. That and the incessant waves battering the boat, the wind that picks up the moment you lift off to cast and the laughing ducks. SHUT UP DAMN YOU! 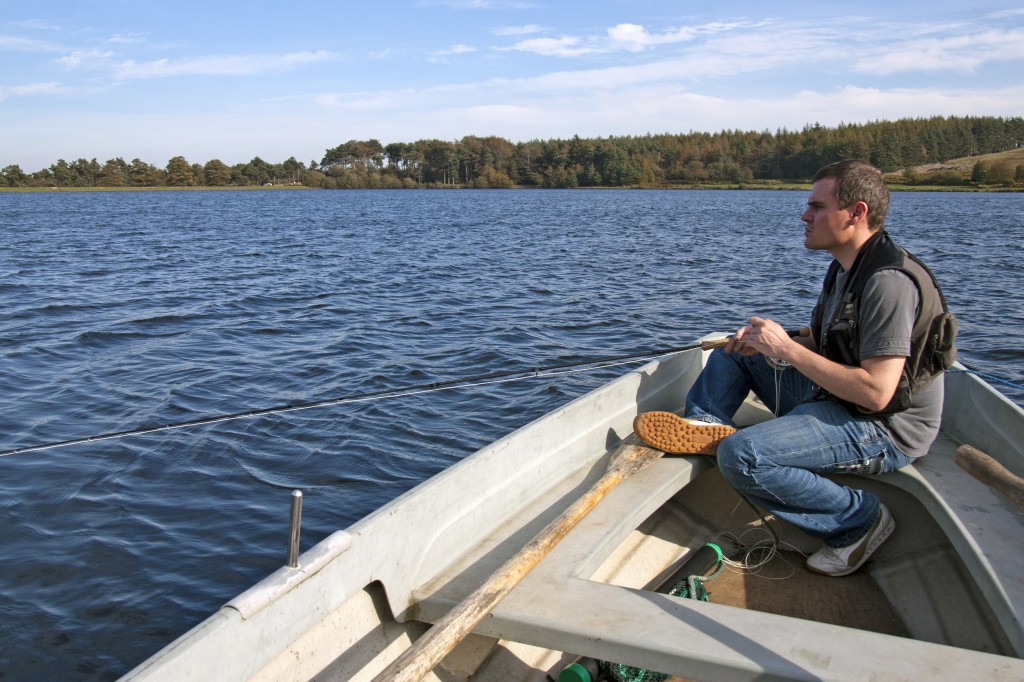 Stu suggested we go plonk ourselves directly in front of one of the bank anglers catching fish, clearly his frustration was also mounting! We maintained etiquette for a while but when a female boat angler who had also caught several fish (pheromones, clearly)near to the bank anglers went back in, we jumped in her grave quick-sharp. Lo and behold, there were several fish moving here. Second cast with an old-skool fluo headed black tadpole lure, I’m in! Hooray says I. By God this fish fought hard, it’s runs were short but numerous and each one as powerful as the last. Seriously, it’s a long time since a rainbow fought this hard on the end of my line. I don’t like killing fish at the best of times but it felt particularly harsh chapping this bad boy who had resisted so well. I didn’t get the obligatory trophy shot but here’s my unorthodox photo of the fish which sadly had to lurk on the edge of the boat as neither of us had remembered a bass bag :-/ 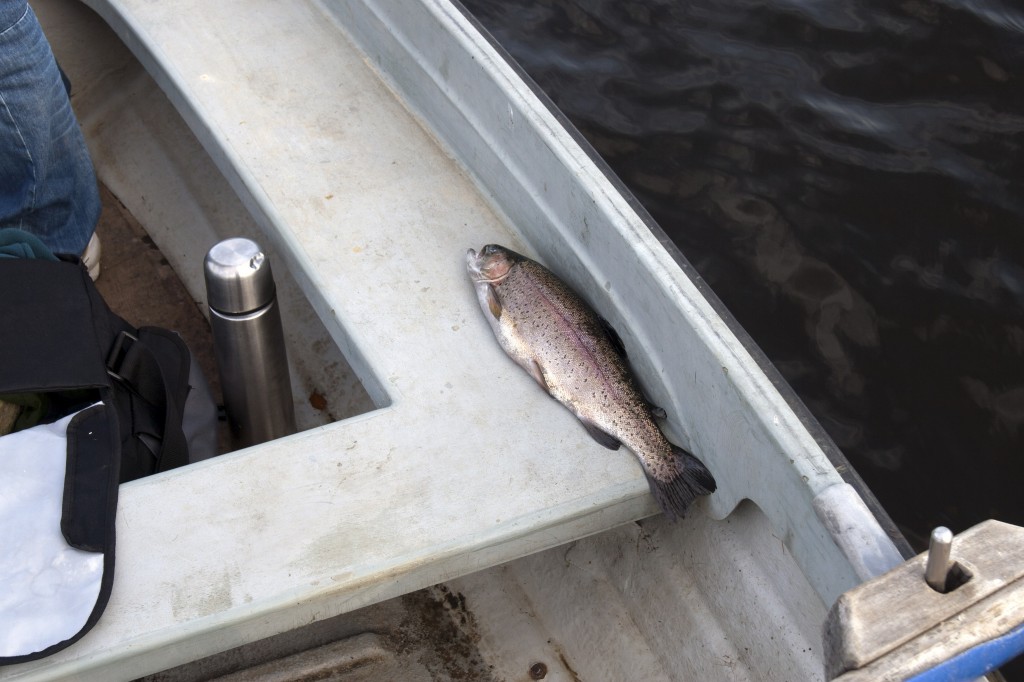 I had a couple more fish nip at the tail of the lure before it disintegrated on me. Which Terry F*ckwit tied this fly? Oh yeah, me. I tried another lure but had no confidence in it, in fact I had no confidence in any of the lures. Most of them looked they’d been tied by someone under the influence of hallucinogenic drugs. I switched to my 9ft #6 rod and fished a gangly red-game hopper at a couple of fish that were rising between myself and the damn. This resulted in numerous swirls and half-assed bites but nothing more. Neither of us actually connected with anything else for the remaining hour or so. We should really have explored other areas of the lake I guess but all that rowing was too much like hard work in the stiff breeze! 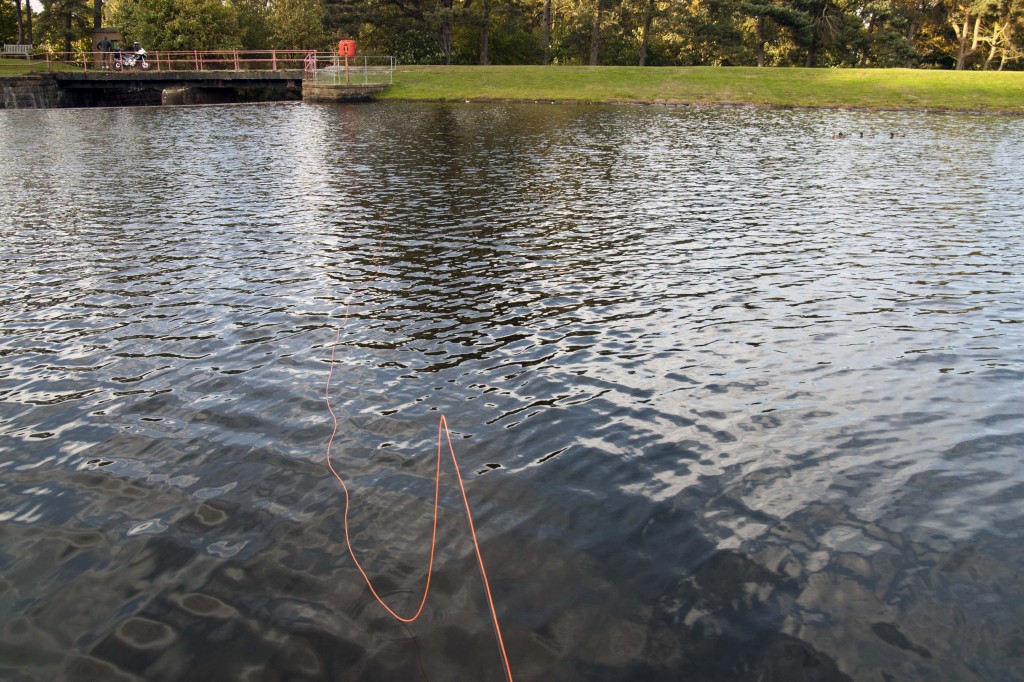 Okay so what did we think of Lockwood? As far as rainbow fisheries goes it’s nice, and despite our lack of success would definitely recommend it to anyone wanting to visit a rainbow trout fishery in Yorkshire. I’ve said it before and I’ll say it again, if you’re not catching fish at a rainbow fishery it’s either your fault for not finding the correct tactic or the fish are simply not feeding/responding. There will always be fish there, you’re just not catching them!

I can’t imagine we’ll be doing many more visits to stocked fisheries at this rate, other than our club water. Poor old rainbows, I just can’t seem to muster much enthusiasm for them anymore! Although after saying that, I may find renewed vigour for them over winter when it’s pretty much the only trout fishing you can do 🙂