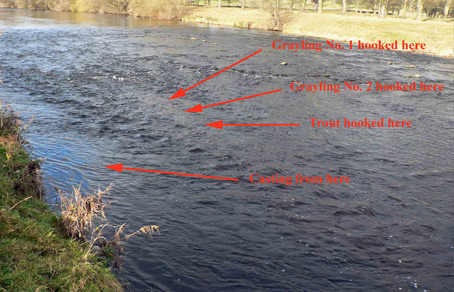 Before I continue with this little article, let me make it perfectly clear I’m no expert on Czech Nymphing. In fact, I’m not really an expert on anything but then regular visitors to Yorkshireflyfishing will already know this. I am however keen to try new experiences and pass on my findings to others in the hope that they may be of use. If you want expert advice on fly-fishing techniques go buy a magazine/book or spend some time with an instructor…if however you want to see an extraordinarily average angler have a bash at something then you’re in luck! I have been Czech Nymphing once before, in the company of a fellow angler who actually knew what he was doing and I did gain much useful knowledge on this slightly controversial technique. On that occasion I caught a couple of small grayling but they were hooked whilst the flies were on the end of their downstream ‘swing’ so not a million miles away from ‘down and across’ I guess (not that I was complaining).

So, two years later I find myself a) wanting to have another go b) unable to remember even half of the knowledge passed down to me. As luck would have it, whilst browsing the magazines in my local newsagent I spied a copy of beginner’s favourite Trout Fisherman and on its front cover was something about Czech Nymphing. Glancing furtively around me I quickly slipped a copy inside an issue of ‘ Massive Jugs’ and made my way to the counter, keen to make my shameful purchase and escape the scornful glare of onlookers.

Massive Jugs was a let-down in terms of learning about fishing for grayling but I struck gold in the pages of Trout Fisherman. The key bits of info I needed were leader length, fly spacing and cup size. I think. Anyway, after absorbing the advice provided I decided I needed a 9 foot leader, with 20inch spacing between my flies (heaviest in the middle). Oh, and 6lb leader which I know is pretty damned heavy for river fishing but it means you at least stand a chance of retrieving your rig from a snag. I knocked up some flies myself which were a combination of patterns from the November edition of Trout and Salmon and some other tungsten bead efforts of my own creation. More about these later…if I can be bothered. The location was to be a short stretch of the River Wharfe which I have access to and definitely holds grayling…somewhere.

Saturday morning was about as good as a mid November morning gets, crisp, sunny and just a slight breeze. Tooled up with knowledge, optimism and a flask full of coffee I found myself stood on the bank eyeing up the water, trying to find a likely looking run. I settled on a length of slower water about four feet deep sandwiched between a ‘V’ formed by two fast currents. The way I saw it, fish would want to hold station in the slower water (therefore using less energy) picking off tasty morsels being swept down in the fast water. I entered the river and instantly regretted only being able to find one seaboot sock that morning but ignored the painful cold seeing as I’m a brave little soldier and began casting my team of three upstream. I say casting but actually it’s more like flicking seeing as you only have around 3 feet of flyline outside the top ring, coupled with about 9 feet of leader. My first few ‘flicks’ were more ‘across’ and ‘slightly up’ which meant the flies weren’t quite getting time to get down and dirty. I remembered another piece of advice I’d been given – “If you’re not losing flies on snags, you’re not doing it right”. My flies were skating down about a foot below the surface in the fast current, no doubt a long way above my intended targets. Adjusting my stance I flicked almost directly up stream and this time the flies dropped into the slower water. As I tracked my rod back down at a speed slightly slower than the current the leader was pointing down beyond 45 degrees and this looked distinctly better. I then began trying to concentrate on detecting takes because in this game they’re usually visual rather than tangible but your only indicator is the leader/flyline tip. After maybe five casts I was watching the end of my leader intently when it suddenly darted about four inches away from its natural path . Without thinking I lifted in and for a second or two fed all the stimuli into my fishing computer until it registered …fish! Bloody strong one as well! It pulled downstream about 12 yards (much to the delight of my trusty Rimfly Concept) then sat it out in the fast current, jagging around on the leader before leaping clear of the surface. Despite its spirited resistance I managed to wear the fish down and after a couple of minutes it was resting in my net although I was careful to keep it under the water. After removing my middle dropper from its scissors I gently held the pound and a half grayling into the (freezing cold) current and off he/she went. Result!

I was still feeling pretty smug with myself when a few minutes later the leader stopped (contrast this to the last one which was indicated by the leader diverting away from its natural path) and once again I lifted into a fish. This soon proved to be smaller than the previous grayling but nevertheless fought hard in the current and again I was relieved to finally get it into my net. By now I was grinning to myself as success on rivers does not come easy for me and in my book two fish within 5 minutes constitutes success! To celebrate I left the freezing river for a few minutes to stamp some warmth back in to my scantily clad foot whilst swilling down coffee.

Upon returning to the water I had made only a handful of casts before my leader momentarily stopped then zoomed downstream. This time it was a very out of season brown trout which had taken the top dropper. After some swift but careful catch and release I carried on fishing this seemingly productive run but the takes dried up thereafter. After a while I carefully moved downstream, across, then back up to fish the other side of the right hand ‘crease’. Two cast later I was firmly embedded into a boulder and when I eventually gave up and pulled for a break a solitary, bedraggled top dropper landed at my feet before tootling off in the current again. Hmm…do I build a new three cast leader or do I admit defeat and call it a day?
Finishing the contents of my flask in the warmth of my lounge I reflected on what to me seemed a pretty successful hour and a half fishing. Perhaps the ‘average’ fly-fishing ‘expert’ would be distinctly unimpressed with such meagre results and would no doubt catch three times that amount in half the time but I was happy. Like I said, I’m no bloody expert.

Aaargh, having just wound everything up nicely I’ve now remembered I was going to tell you about the flies. Ok, here you are:

2 thoughts on “An Idiot’s Guide to Czech Nymphing”